The point of no return on the transition to electric vehicles may be closer than you think.

Oil consumption continues to rise in the U.S. and around the world, but as electric vehicles keep growing as a percentage of vehicle sales, there will ultimately be a tipping point on multiple fronts. The first will be manufacturers investing in more EVs to ultimately overtake internal combustion engines, which is happening today from Tesla (TSLA 2.52%) to General Motors (GM 0.51%) to Porsche.

The bigger tipping point will be a peak in oil consumption that the world will (likely) never look back from. We don't know when peak oil will happen, but given the cost reduction of EVs and the focus on reducing emissions around the world, it's only a matter of time.

No matter where you look, EV sales are going up. And in 2020 and 2021, there will be even more options coming to the market from Porsche, Ford, Kia, Mini, and many more.

As EV sales are rising, overall vehicle sales are falling. You can see the steady decline in U.S. auto sales below, and according to the Center for Automotive Research, global auto sales are expected to fall by 4 million units in 2019 from about 79 million a year ago. 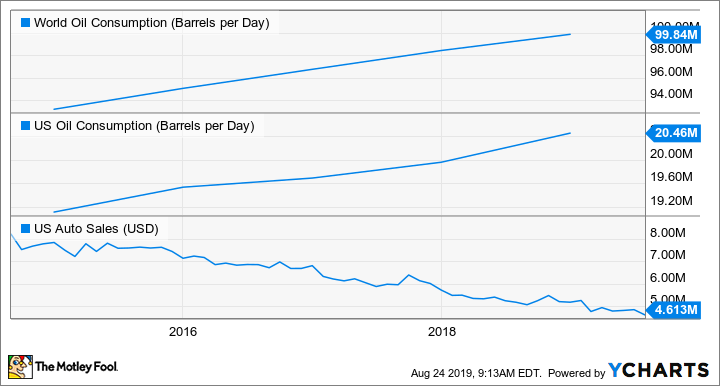 World oil consumption data by YCharts. Auto sales are on a monthly basis.

EVs are still only a fraction of total global sales with 2 million to 3 million vehicles expected to be sold this year. But sales are growing even as overall sales decline.

Why is oil consumption going up?

If EV sales are going up and auto sales overall are going down, then why is the chart above showing that oil consumption is rising? The two reasons: Larger vehicles, like trucks and SUVs, are a bigger portion of the sales mix, and people are driving more with the vehicles they have.

According to the U.S. Bureau of Transportation Statistics, total highway miles driven have been rising steadily since 2011, including during the period of declining auto sales that you see above.

In the U.S., light trucks are now a whopping 69% of the market. That includes small SUVs up to large trucks, but these vehicles are typically less efficient than cars, so as they increase in numbers, they increase oil consumption.

It'll take time to overcome the trend to larger vehicles and the higher oil consumption that comes with it. But remember that it was only a few years ago that oil consumption in the U.S. was declining because the economy was weak and fuel efficiency was going up. Trends can reverse quickly inside the traditional auto industry, and with EVs continuing to take share, a reversal in consumption growth could happen quickly.

Is the tipping point coming?

EVs will continue to take market share in the auto industry, and for the companies investing in new technology, that may not change their volumes much. GM, Volkswagen, and Nissan are some of the early leaders in EV technology and will continue to increase EV volumes. Of course, Tesla will be leading the charge. Every automaker will be impacted by the growth of EVs, and those getting out in front of it will be best off financially.

Where there's more uncertainty on the investment impact is in oil consumption. If SUVs continue to rise as a percentage of overall sales, there could be an increase in oil consumption overall for years, but the share of EVs in the total vehicle population is simultaneously going up. If oil prices rise in response to greater fuel consumption, then it could make EVs look even better by comparison. Given the lower fundamental cost of operating an EV, there may be no going back once that happens.

When the recession hit in 2008, oil prices tumbled from over $140 per barrel to less than $40, and there was only about a 2% decline in overall demand. If EVs create a structural decline in oil demand, it could have a devastating impact on the oil industry -- and it's coming more quickly than it might seem.