It's not all that surprising that Dick's Sporting Goods (NYSE:DKS) beat analyst expectations in the second quarter. The signs were there that the retailer would post good sales numbers, but the strength of the results does raise some eyebrows.

It indicates almost all of the major headwinds Dick's faced are behind it, and in the words of CEO Ed Stack, the retailer has "bent the curve on sales," allowing it to increase guidance for the full year. 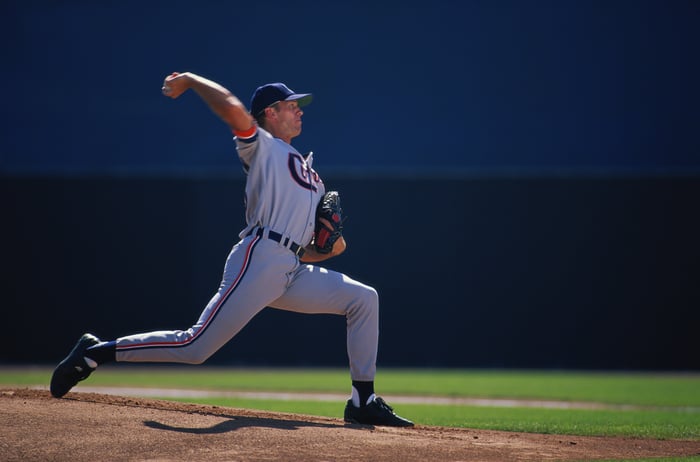 Trade worries, weak retail partners, and strong online competitors were all conspiring against Dick's so much that Wall Street wasn't sure it would be able to produce anything more than meager advances. Analysts had expected sales to come in around $2.21 billion on a 1% gain in comps, which would generate $1.21 per share in earnings. Instead, Dick's saw sales jump 3.2% to $2.26 billion. Comps came on strong with a 3.5% increase as earnings came in at $1.26 per share.

However, earnings were helped by share repurchases. Dick's bought $159 million worth of stock during the quarter. When combining this buyback with repurchases in other recent quarters, diluted shares outstanding have been reduced by more than 10 million since the year-ago quarter. Had the sporting goods retailer not repurchased all that stock, it would have underperformed compared to last year.

Still, the strong top-line results were broad based, spread across all three of its primary categories -- hardlines, apparel, and footwear -- not to mention at both its brick-and-mortar stores and the online channel. E-commerce sales jumped 21% in the quarter.

Stack said in the earnings release, "Our key strategies and investments are working, our major headwinds are behind us and we've bent the curve on sales."

No longer hunting for gun sales

One of those headwinds had been its firearms business, which looks increasingly likely to be discarded. Following the Parkland school shooting in Florida last year, Dick's Sporting Goods stopped selling certain semi-automatic rifles at its Field & Stream stores, raised the age to 21 of those who can purchase a firearm, and hired a lobbying firm to advocate for gun control.

However, Dick's doubled down and eliminated the hunting business first from a handful of stores and then from 125 more locations. It replaced the gear with other sports items that carried better profits and weren't as seasonal as the hunt category, which tends to have the most sales in the fall. Dick's said during the second quarter that the original stores from which hunting was removed generated their third consecutive quarter of positive comps and outperformed all the other stores.

Now Dick's is considering getting rid of the hunting business altogether as well as shedding the 35 Field & Stream stores. So while the retailer says its strategic review of the hunting category continues, it seems highly probable to be on the way out.

Because the sporting goods store is generating more sales and has increased from seven to eight the number of new stores it plans to open this year, most of which will come in the third quarter, you can be sure they won't have a hunting department in them.

A sporting chance for even better results ahead

Dick's Sporting Goods raised full-year earnings guidance to a range of $3.30 per share to $3.45 per share, well ahead of analyst forecasts of $3.33 per share. Previously, Dick's guided to a range of $3.20 to $3.40 per share, and where it thought comps would be "slightly positive to an increase of 2%," it now says same-store sales will increase by low single digits.

That means there's good reason to believe Dick's will continue bending the sales curve higher throughout the rest of the year.