The Versa 2 will launch alongside a new subscription service next month.

Fitbit's (FIT) experience in the smartwatch market has been hit or miss, to say the least. Ionic, the company's first attempt, was a $300 smartwatch that fell short of expectations. The Versa, which was still full featured enough to be a legitimate competitor to the Apple Watch, sold well at $200. But the Versa Lite, a cheaper, stripped-down version of the Versa, did badly enough to force the company to slash its guidance for 2019.

Fitbit is sticking with what works for its next smartwatch, the Versa 2. Priced at $200 like its predecessor, the Versa 2 brings refinements and some new features, most notably a built-in microphone that enables the use of Amazon Alexa. The Versa 2 will be available in September, launching alongside the new Fitbit Premium subscription service. 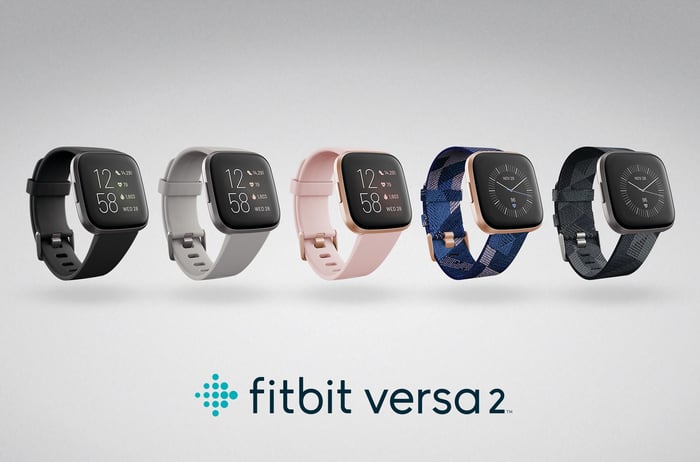 Iterating on a successful product

The Versa 2 isn't all that different from the original Versa, but that's probably a good thing. It features a faster processor, a larger AMOLED display, and an additional day of battery life compared to its predecessor, but not much has changed visually.

In terms of features, Alexa support, a Spotify app, and some new sleep-related features help the Versa 2 stand out. Fitbit Pay is supported on all models, unlike the original Versa, which only supported mobile payments on the more expensive Special Edition variant. The Versa 2 has a special edition as well, but the only differences are the material and color.

Fitbit found with the Ionic that it can't succeed at a price too close to that of the Apple Watch. It found with the Versa Lite that its customers don't want a hobbled smartwatch. The Versa was the right combination of price and features, and the Versa 2 looks to build on the success.

Monetizing the user base

Fitbit has a base of more than 27 million active users, and the primary way the company generates revenue from those users is convincing them to upgrade to new devices. That requires a steady stream of ever-improving fitness trackers and smartwatches, which Fitbit has struggled with in the past. The company expects its total revenue to decline this year, and it expects to turn a substantial loss.

Services are the key to lowering the company's dependence on new products, and Fitbit is making a renewed push to generate subscription fees from its users. The company will start rolling out Fitbit Premium, its new health and fitness subscription service, in September. Priced at $9.99 per month or $79.99 per year, the new service could generate a substantial amount of revenue for Fitbit if it can get a small fraction of its users to sign up.

This is the same service that Fitbit is offering as part of its partnership with Singapore's national health program. In that deal, Fitbit will give away its inexpensive Inspire HR fitness trackers in exchange for a one-year commitment to Fitbit Premium. The company hopes to eventually reach 1 million Singaporeans through this program.

The Versa 2 should do better than the Versa Lite, although its launch is likely already baked into the company's disappointing full-year guidance. Fitbit Premium could be a big hit if Fitbit users are willing to pay a monthly fee, but that's a big if. Fitbit is a product company trying to become a service company, and that's not an easy transition.

Fitbit's smartwatch and subscription strategy will be put to the test this holiday season. If they succeed, 2020 could be a much better year for the company.