Please ensure Javascript is enabled for purposes of website accessibility
Log In Help Join The Motley Fool
Free Article Join Over 1 Million Premium Members And Get More In-Depth Stock Guidance and Research
By Daniel Miller - Updated Aug 29, 2019 at 8:38AM

No one knows when the next recession will come, but these three stocks should perform just as well as they are now, or better, when it happens.

If you've been watching or reading the news recently, you've probably heard concerns about a recession slowly get louder and louder. Despite the U.S. economy's continuing to grow and add jobs, global growth outlooks have been cut, and escalating trade tensions between the world's two largest economies, the U.S. and China, only add to investor nervousness. If you're very concerned about a recession, it's a good idea to make a list of stocks that perform well during a downturn. And if you're here for some ideas, you're in luck: AutoZone (AZO 2.71%), Dollar Tree (DLTR 1.32%), and Ferrari (RACE 2.88%) are all intriguing options for their own reasons.

During the Great Recession, the S&P 500 shed roughly 38% of its value through the 18-month slowdown. Even finding stocks that traded flat over that time was considered a huge win for your portfolio, but AutoZone thrived, and its stock actually increased 35% over the same 18 months.

Why did AutoZone pop when the rest of the S&P 500 dropped? The answer may be simpler than you think, because as consumers felt the pinch in their wallets and as uncertainty about the economy intensified, many consumers saved a buck whenever they could. For some people that meant doing simple auto repairs and maintenance themselves instead of paying a repair shop. Even something as simple as consumers opting to change their own oil for a year brought a lot of foot traffic into automotive retailers. 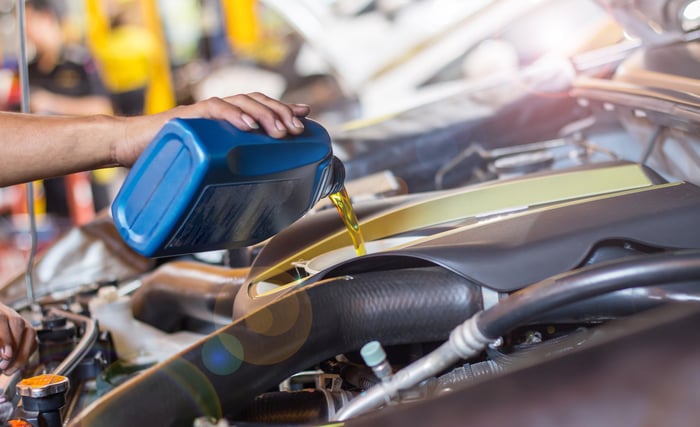 Further, the company has strong engagement through offering consumers tool loans, how-to videos, diagnostic equipment at its stores, and even repair guides – if you're going to go out on a limb and do your own basic repairs, AutoZone is known to be a great starting point. As the past recession went on, many consumers put off buying new cars, and as the age of vehicles on the road increased, the demand for maintenance, service, and small repairs rose.

Now, it's true that AutoZone was one of multiple auto retailers to thrive during the past recession: O'Reilly Automotive and Advance Auto Parts also jumped 16% and 15%, respectively. One reason AutoZone outperformed its primary competitors is likely its nationwide presence and brand image, which has helped the retailer achieve leading market share in the do-it-yourself market. Even if we avoid a recession in the near term, AutoZone recently decided to expand its plan for megahubs, a distribution network strategy to help improve inventory availability and speed of delivery in order to attract more commercial customers, which will only add to its impressive DIY business.

AutoZone offers investors an excellent option, as its business thrives when consumers need to save a buck, but another intriguing stock to own during a downturn is a good idea for a completely opposite reason: Ferrari's customers rarely need to save a buck.

Many of us will unfortunately never obtain enough wealth that we can completely ignore possible recessions. But that's common for the type of consumer buying Ferrari's ultraluxury vehicles. Years ago at a Frankfurt car show, Fiat's CEO, the late Sergio Marchionne, quipped, "If you go to the Ferrari stand, there aren't any customers worried about the recession." Marchionne continued, according to Bloomberg, "The last Ferrari customers I saw at the show weren't crying."

As insensitive as it may seem to the masses that feel financial pain during recessions, Marchionne was right, wealthy people will buy extravagant Ferraris even during economic slowdowns. Even during the second quarter, as the vast majority of automakers saw slowing global demand, Ferrari logged an 8% vehicle shipment increase, which drove revenue 9% higher and net profit 14% higher.

One of the core advantages that make Ferrari an incredible stock and company is its exclusivity -- management literally sets the limit on the number of vehicles it wants to sell, and it often has a wait list or backlog of orders. That gives the company control over its sales growth and helps boost its lucrative pricing, as demand seems to always exceed supply, even during downturns. Just take a look at the company's margins compared to those of mainstream automakers, and you'll see the company is more an ultrapremium luxury manufacturer than it is an automaker. 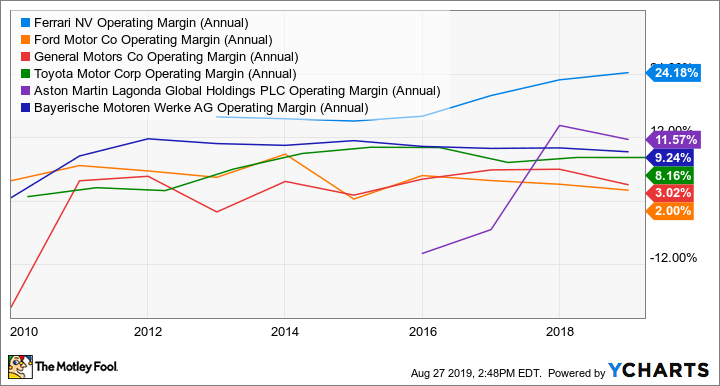 Mainstream automakers checked in near the bottom for operating margin, as they fail to generate anything near the average transaction prices (ATPs) or margins that Ferrari can, and well-known luxury automakers such as Aston Martin and BMW fared only slightly better. Here's the kicker: Not only would Ferrari's business do fine during a downturn, the company plans to accelerate its profits in the near term. In fact, it announced roughly a year ago that it plans to launch 15 new products, including the brand's first SUV, to double the company's profit by 2022.

One problem with Ferrari's stock is simply that its share price is almost as expensive as its vehicles. Ferrari trades at a sky-high forward consensus price-to-earnings multiple of 36 times. But if you're looking for a recession-proof stock, and one with a near-term growth story, maybe that price is warranted.

Looking at the first factor, price, dollar chains generally operate on thin margins which enables them to pass on highly discounted goods to lower-income consumers. Consumer dollars can go further at a retailer such as Dollar Tree during recessions, and more people look to discount chains to try and stretch their earning power.

But there's more to the company's success than simply offering discounted goods for around a dollar. Dollar stores have long zeroed in on smaller communities that don't have a large grocery store presence, if any at all. That strategy has been met with some community criticism over the years as the discount chains have crippled sales of independent grocery stores, but it's a strategy that's paid off for investors. 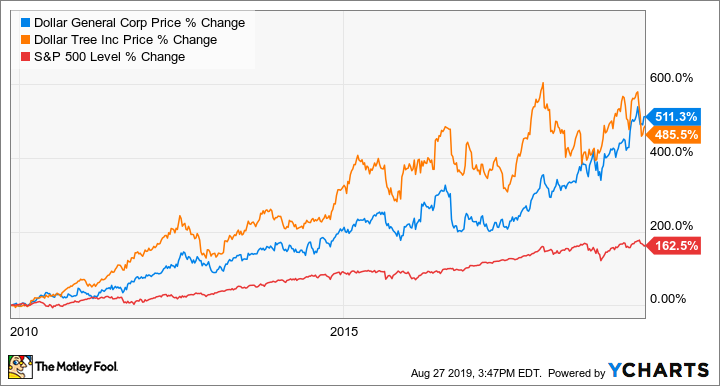 You could easily argue that Dollar Tree is in even better position for the next recession, as the company acquired Family Dollar in 2015 and now operates over 15,200 stores across 48 states and five Canadian provinces. That massive scale and experience operating under thin margins should help management wade through the uncertainty of escalating trade tensions and tariffs on Chinese goods. Further, Dollar Tree doesn't require innovation or a unique experience to drive its business: It simply operates small stores with lean staffing and a fraction of the product lines and inventory that larger retailers deal with. For all of those reasons, don't be surprised if Dollar Tree gives investors more bang for their buck during the next recession, just as it has in the past.

How to handle recession fears

We don't know when the next recession will be, but we know there will be one. It's important not to make any knee-jerk decisions and to keep your investing thesis focused on the long term. But that doesn't mean you can't add shares of recession-resilient stocks, whether you add businesses that thrive as consumers look to save or stretch their dollars, such as AutoZone or Dollar Tree, or businesses that cater to customers who have long stopped counting their dollars, such as Ferrari.