There's a lot not to like about Baidu (BIDU -0.38%) these days. Revenue growth has slowed dramatically, and margins are contracting. Then there's the general state of the economy. If you think Stateside investors are scrambling to prepare for a potential recession and fretting about the fallout from a trade war with China, just imagine how the more jaded investors feel on the other side of that equation.

Baidu stock hit a six-year low earlier this month, dipping into the double digits for the first time since July 2013. The former dot-com darling behind China's leading search engine would go on to post mixed but ultimately well-received second-quarter results. Times are tough for China in general and for Baidu in particular, but this could be a great time to take advantage of the multiyear low and buy into one of the internet's heaviest international hitters. 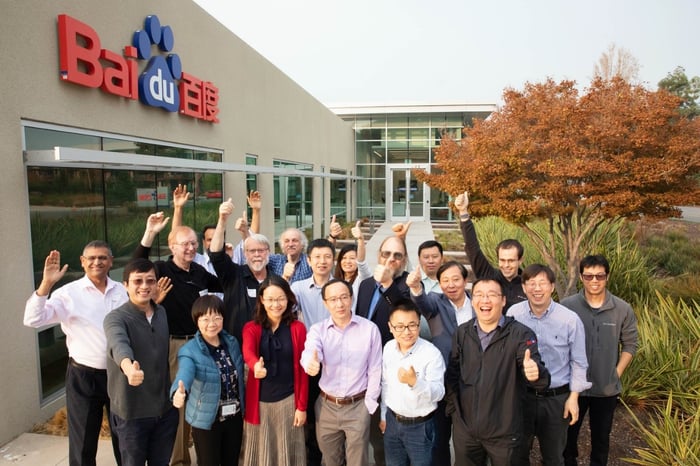 Born on the Baidu

Baidu has thrilled investors with double-digit and at one time triple-digit top-line growth, so it was jarring to see organic growth slow to 6% in last week's second-quarter report. It may seem like a relative victory since it exceeded Baidu's own guidance as well as the expectations of Wall Street pros, but it's understandable if this isn't the kind of revenue burst that one associates with a growth stock. Making matters worse, its bread-and-butter online advertising business is declining. It's Baidu's emerging services that are lifting overall results into positive territory.

The bad news doesn't end there. Profitability continues to go the wrong way. Adjusted earnings fell, and -- again -- it's not an absolute victory just because analysts were holding out for a more precipitous bottom-line slide. The rotting cherry on top of this melting sundae is that Baidu doesn't see things getting better right away. Its guidance calls for revenue growth to continue decelerating in the current quarter.

If this seems like pretty grim stuff, let's talk about 2016 -- the only year outside of this one in which Baidu failed to deliver at least double-digit revenue growth. Baidu's top line rose a mere 6% in 2016, matching its latest quarter's climb. This was a different Baidu slowing then. Chinese regulators insisted that Baidu and its smaller peers scale back the posting of high-paying medical-related paid search ads after a well-publicized blogger died after seeking treatment from a dubious cancer center that advertised on Baidu.

If we go back to 2013 to find the last time the stock was trading this low, we find that bears were concerned about Baidu's inability to migrate to mobile. Baidu was largely a desktop-based platform, but it turned things around in a hurry later that year when it acquired a leading mobile apps marketplace operator and made headway into new nonsearch growth markets.

We can't really call this a pattern just yet, but it does seem as if Baidu has something to titillate the worrywarts every three years. The good news for investors is that the problems of today are more the result of China's economy than of the Baidu- or industry-specific setbacks of 2013 and 2016. Baidu is also generating far more revenue now than it did the last time it traded at current levels.

We didn't know if Baidu would be able to break out of the desktop box. It did. We didn't know if paid search would survive the regulatory scrutiny of advertiser quality. It did. Betting that China's economy will eventually get back on track and free marketers to ramp up their ad spending again is an easier -- or at least more certain -- hurdle to clear for Baidu. It will bounce back, making Baidu a buy at its lowest level in more than six years.