Starbucks has brought its signature pumpkin spice latte fall drink back with almost a month left in the summer.

Starbucks (SBUX 1.15%) uses limited-time offers (LTOs) to engage its regulars and lure lapsed customers back into its stores. Consumers, at least in theory, look forward to the return of their seasonal favorites, and that drives sales, consumer awareness, and social media shares.

That has always been true of the Pumpkin Spice Latte (PSL), the chain's signature fall drink. People love the iconic beverage and look forward to its return, rushing into stores to get one as soon as it appears and maybe visiting more times to have a PSL before supplies run out.

It's a tried-and-true strategy for restaurants, but Starbucks may be making the PSL less special by bringing it back earlier and earlier each year. This year, the coffee chain has already launched the drink -- and a series of other fall beverages -- with nearly a month left in summer. 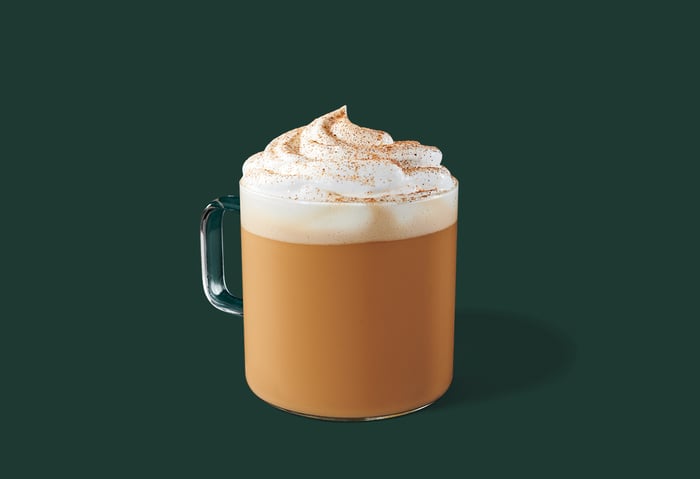 Starbucks has brought back the PSL even earlier this year. Image source: Starbucks.

Can there be too much of a good thing?

By launching the PSL and its fall menu on Aug. 27, Starbucks risks making the drink less special. It's possible that happened last year when the drink was released on Aug. 28. Starbucks COO Rosalind Brewer sort of dodged a direct question on the performance of the drink during the chain's fourth-quarter earnings call.

Cowen & Co. Analyst Andrew Charles noted of the PSL that "historically, it out-comps itself every year that you've been running it" and asked how it was doing this year. Brewer was not very direct in her answer:

So the question on PSL; so we saw a nice start -- turn on PSL coming out of the season. We did something different with PSL this season. We really had social media with us at this time. As we've been talking about really getting behind the marketing of the brand and the marketing of the products and focusing on what our customers expect of us, PSL is one of those tried-and-true food [items]. So it came out of the gate, strong and fast ... So we were pleased, it did a nice job for us through the quarter.

That's more of a nonanswer than an answer, and to be fair, Q4 ended on Sept. 30 and the PSL remains on menus for at least part of October (supplies stop being replenished toward the end of the PSL season). Still, Brewer almost certainly had data for how the drink performed year over year, and not saying if it was beating previous-year comps suggests that maybe it didn't.

Of course, it's also possible that Brewer did not have the full picture or that she chose to not share data she was not legally required to share. It's likely, however, that bringing the PSL back before Labor Day, when most people still have a summer mentality, lessens sales on launch day and maybe lessens daily demand.

Is this actually a smart move?

Starbucks has focused on improving the experience for its customers. Doing that has involved working to spread out demand and scheduling promotions so they don't cause production backups. This has included making its afternoon Happy Hour specials more exclusive and less focused on harder-to-make Frappuccino frozen beverages.

It's possible, maybe even likely, that Starbucks has brought the PSL back early in order to spread out demand. Consumers may not rush to stores in August to get a fall drink, but they may still want one when temperatures drop a little bit.

Starbucks still gets a lot of media and social media coverage for the PSL. Bringing it out earlier creates a narrative beyond the basic idea that the seasonal item has returned.

Having the PSL on menus longer may improve customer experience by lessening wait times. People still want the drink and there's no real benefit in front-loading sales.

This strategy may lead to slightly lower overall sales because some occasional customers may forget about the drink by the time it's actually fall outside. Starbucks may be willing to make that trade in order to prevent long lines and extended wait times.

Starbucks has made its signature LTO a little less special. That's probably a smart move if the company wants to deliver the best in-store experience possible.