Dividend growth or high yield? One of these two Dividend Champions is sure to fit the bill.

Dividend investors generally fall into one of two camps: dividend growth or high yield. This pair of dividend stocks offers up one of each type from companies with decades of annual dividend increases under their belts. One more thing they have in common, however, is that they offer yields at the high end of their historical yield ranges today. That means these Dividend Champions could be presenting a worthwhile buying opportunity right now. Here's a quick primer on each.

1. Doubling down, with a side of safety

ExxonMobil (XOM -1.83%) is one of the largest players in the global energy industry, with a focus on the oil and natural gas space. Notably, its business spans the upstream (drilling), midstream (pipeline), and downstream (refining and chemicals) sectors. It's worth highlighting that downstream operations tend to benefit from low energy prices. So while the prices of oil and natural gas are the main drivers of the company's top and bottom lines, the diversified portfolio helps to smooth the ups and downs of these often-volatile commodities. This is a deliberate approach that highlights safety. 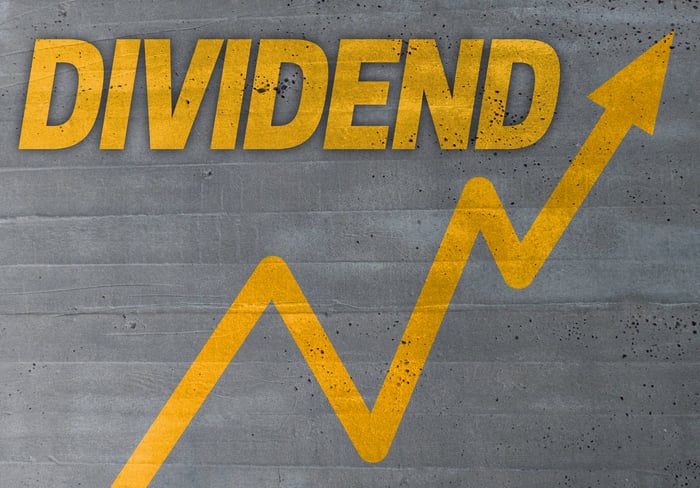 But this isn't the only way in which Exxon attempts to keep investors safe. It also has one of the strongest balance sheets in the industry. Long-term debt, for example, makes up less than 10% of the company's capital structure. That's a low level for any company and gives Exxon the financial flexibility to add debt during difficult oil markets while still upping the dividend and supporting its capital spending efforts. In fact, it was one of the few oil majors that was able to do both during the deep oil downturn that started in mid-2014. Its annual dividend streak is up to 37 years at this point.

Right now, Exxon is going against the grain a little, with plans to spend up to $35 billion a year on growth projects despite oil markets that remain volatile. Many peers are taking a more conservative approach. Despite these plans, Exxon has actually been reducing debt, cutting long-term debt by around 30% since hitting a peak in 2016. The best part is that the oil giant's plan, which stretches out to 2025, is starting to show positive results. Meanwhile, investors remain downbeat on the shares, which offer a historically large 5% yield -- a level last seen in the mid-1990s. If high-yield stocks are your thing, then Exxon should be on your short list today.

2. Food isn't going out of style

Next up is consumer staples stock Hormel Foods Corporation (HRL 0.29%), a big player in the packaged food space. That's been a rough industry to be in recently because consumer preferences have shifted toward foods considered healthy and fresh. It's a headwind for Hormel but not something that investors should get too worried about. Yes, the company makes center-of-the-store products like Spam, but it has also been shifting its brand lineup to align with the preferences of its end customers.

For example, it has been selling brands (like Diamond Salt) that don't resonate and buying brands that do (like Wholly Guacamole and Columbus Meats). It has also been focusing on expanding its reach overseas, where it is still just a small player, with a notable business in China and a recent acquisition that gives it a toehold in South America.

There are two things to take away from these changes. First, Hormel is, at its heart, a branded food company that actively manages its portfolio. It has 40 brands that hold the No. 1 or 2 spot in their category. It didn't build this portfolio by chance; decades of hard work have left the company in a position of strength. That strength notably shows up on the balance sheet, where, despite a lot of acquisitions, long-term debt makes up less than 5% of the capital structure. Hormel can handle headwinds and change at the same time. 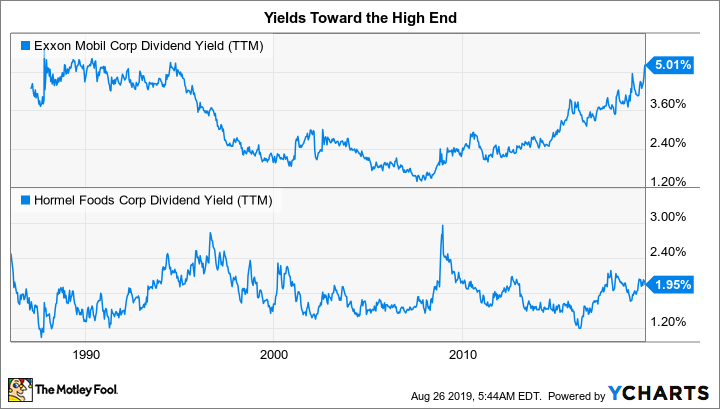 Right now, the stock yields around 2%, which is toward the high end of its historical range. That's about what you'd get from an S&P 500 Index fund. What sets Hormel apart is that it has grown its dividend at an incredible 15% annualized rate over the past decade. To put some numbers on that stat, Hormel's dividend was $0.19 per share in 2009 and $0.75 per share in 2018. Note, too, that it has increased its dividend annually for more than 50 years, so it clearly puts a high value on rewarding investors with steady and growing dividends.

And as you might expect based on management's conservative use of debt, the payout ratio is modest at around 50% of earnings. That provides ample room for growth and downside protection should Hormel hit a soft patch. If you like dividend growth, Hormel is worth a close look.

It would be overkill to suggest that Exxon and Hormel are perfect dividend stocks. No stock is perfect. But the mixture of historically high yields and safety that these two companies offer should be hugely compelling for income investors of any risk preference. If you haven't already added these stocks to your high-yield or dividend-growth portfolio, respectively, now is a good time to consider them.