Southwest Airlines (NYSE:LUV) has been a rewarding investment for investors. A $1,000 investment made in 1990 with dividends reinvested would be worth $54,000. Those gains were driven by Southwest's strategy of keeping operating costs as low as possible, pass the savings on to the customer with low fares, and offer a little in-flight hospitality.

Even with competitors starting to come on strong in recent years, Southwest delivered a record year in 2018. Revenue hit an all-time high of $22 billion, and annual profit also set a record at $2.4 billion.

So far, 2019 has had its ups and downs. The highlight has been the launch of the new service to Hawaii, with the low point being the delays in getting the new Boeing 737 MAX 8 in the air.

Beyond the short term, there is much opportunity for Southwest to remain a good growth stock. Here's a look of what's on the company's growth agenda and how it can stay ahead of the competition. 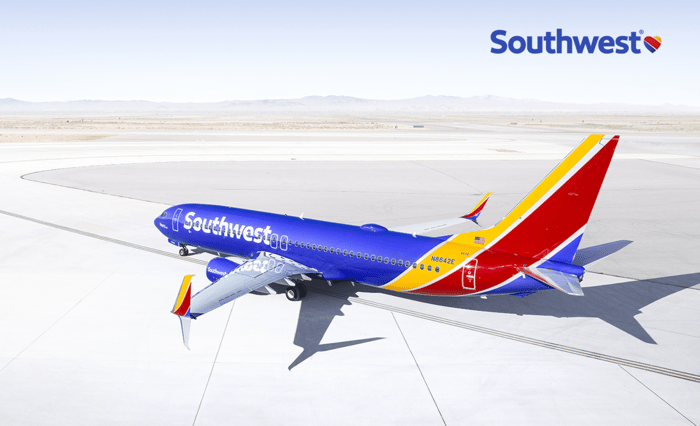 Southwest spent the past few decades expanding its coverage from a regional focus to nationwide. It's now the largest domestic airline, connecting 101 cities across 40 states.

Flights to Hawaii just kicked off earlier this year, with flights from Oakland and San Jose going to Honolulu, Kona, and Kahului. The $99 fare for flights between Sacramento and Hawaii starting in January 2020 have already sold out, so this should be a popular service. Southwest plans to expand the service with additional connections between California and Hawaii next year.

Hawaii will be the primary focus of management's expansion strategy through 2020, but the company has huge ambitions to expand internationally.

Southwest has been the most profitable airline over the last half-century. It's the only major airline that hasn't filed for bankruptcy. Southwest achieved this remarkable feat in a cutthroat industry by doing things differently than its peers.

The company sticks to short routes and flies one type of aircraft (the Boeing 737). Also, while its competitors employ what's known as the hub-and-spoke routing system, Southwest uses a point-to-point routing structure. There are other nuances to the business model, but all together, these characteristics have helped Southwest maintain high employee productivity and better cost efficiency than its competitors.

Some investors may wonder if expanding internationally will be as profitable as expanding domestically since Southwest has outperformed the industry since the 1970s by focusing on shorter routes.

The interesting thing about Southwest's growth over the years is that the return on invested capital has increased as it has continued to expand, including adding international destinations. This is consistent with the company's DNA to allocate capital to maximize margins and returns for shareholders over the long haul. 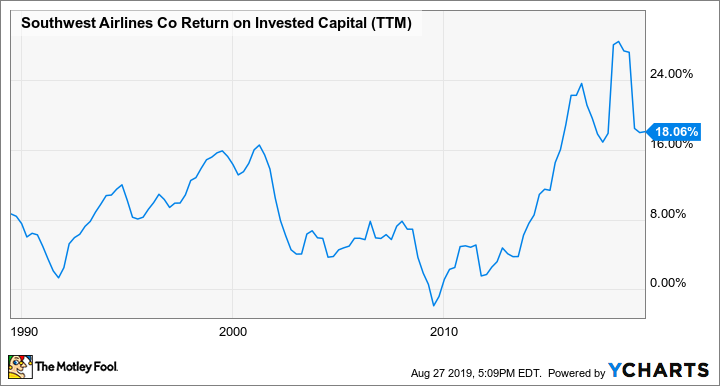 Looking beyond Hawaii, the next destination on the flight schedule is likely Latin America, where Southwest already has routes with 15 airports in the region, including to Mexico and the Caribbean. Given that Latin America has a population about twice the size of the U.S., this could present a greater opportunity than the phenomenal growth Southwest has experienced over the last 50 years.

Sticking to its guns

Moving forward, Southwest will have to double down on execution. Other airlines are starting to copy parts of its strategy by lowering costs and offering low ticket prices to compete more aggressively.

Delta Air Lines (NYSE:DAL) and American Airlines (NASDAQ:AAL) have increased their profitability significantly over the last 10 years. But as iron sharpens iron, these competitors have pushed Southwest to become even more efficient along the way, and management is committed to maintaining the company's cost advantage.

As Southwest expands over the next decade, the effort to continually improve cost efficiency and margins, which have made it the strongest airline financially, won't change. Management is currently going through a multiyear process to modernize the fleet with aircraft that have higher seating capacity, such as the Boeing MAX. This will increase revenue per ASM, which is intended to spread more revenue over operating costs to improve margins.

It's also optimizing routes, with an eye on the details, such as flying the routes with the best tailwind to lower fuel costs. Southwest is also implementing a new reservation system that is expected to add $500 million of incremental pre-tax profit by the end of 2020.

Southwest stock is a buy

Southwest has managed to reinvest in the business while distributing most of its free cash flow to shareholders in the form of share repurchases and dividends. The company just increased the quarterly dividend by 12.5%, which brings the forward dividend yield to 1.43%.

The near-term hiccup with the Boeing MAX delay is allowing investors to buy the stock at a significant discount right now. Currently, the forward price-to-earnings ratio is 9.8 times next year's earnings estimate.

The combination of international expansion and a cheap valuation makes Southwest Airlines a compelling stock to buy and hold for the next decade. By 2030, Southwest should be generating higher revenue and profits, and that should translate to a satisfactory return for shareholders.