MGM Resorts (NYSE:MGM) seems like it's on a quixotic campaign to prevent the Mashantucket Pequot and Mohegan Indian tribes from opening a new casino in East Windsor, Connecticut. Because the new resort would be sited close to MGM's own Springfield, Massachusetts, casino, this may seem a purely self-interested action on the surface, but the situation really is more complicated.

While it's true that MGM fears losing revenue to a new casino, particularly because its Springfield location is struggling following Wynn Resorts' opening of its Boston resort, the casino operator still has a good case that protocols weren't followed and Connecticut is pressing its finger hard on the scale in favor of the tribes.

In a new challenge to the tribes' casino ambitions, MGM is suing the federal government for allowing the project to proceed. 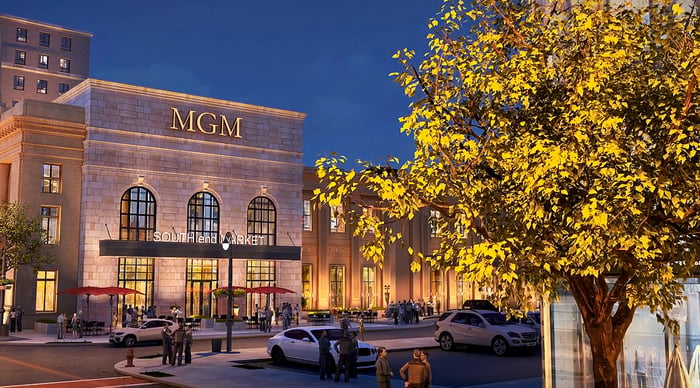 MGM and the tribes haven't always been at loggerheads. Under a 1991 agreement, the two tribes were given exclusive rights to operate casinos on tribal lands in exchange for Connecticut collecting a 25% cut of slot machine revenue, and in 2006, MGM and the Pequots partnered at Foxwoods Resort in Connecticut. But in 2013, as the two separately sought expansion in Massachusetts -- MGM in Springfield and the tribe in the greater Boston area of Milford -- they dissolved their license agreement.

MGM ended up winning its Springfield casino bid at a spot located less than 80 miles from Foxwoods, while the Pequot tribe lost its bid to Wynn, which recently opened its Encore Boston resort after much delay.

As more casino gambling sprouted up in neighboring states like New York and Rhode Island, siphoning away revenue from Foxwoods and the Mohegan tribe's Mohegan Sun casino in Uncasville, Connecticut, the tribes sought to expand further in the state.

Because Connecticut was wary of losing the lucrative pact with the tribes to split their slot machine profits -- the deal stays in place only so long as the tribes are the state's sole gaming operators -- the legislature sought to give them special privileges.

For instance, it granted the tribes a no-bid contract allowing them to develop a commercial casino off tribal lands in East Windsor, located just 12 miles from MGM's Springfield property, and proposed giving the tribes the right to develop another resort in Bridgeport. It also sought to let them operate the state's online gambling and sports betting operations, both of which would be simultaneously legalized.

Needless to say, MGM Resorts, which also wanted to expand into Connecticut, was upset and sued the state, arguing the original pact the tribes had for their resorts didn't give them the right to also be granted no-bid contracts elsewhere in the state. It said barring other commercial interests from competing for contracts violated the U.S. Constitution's equal protection and commerce clauses, though both a state court and a federal appeals court rejected MGM's suit.

Meanwhile, the East Windsor deal was conditioned upon the U.S. Interior Department accepting the new agreement, but Interior reportedly slow-walked a decision.

The tribes sued the federal government, alleging MGM was lobbying U.S. Interior Secretary Ryan Zinke to hold up the deal. It was only after Zinke resigned last December that the department approved the deal.

Now, MGM Resorts is suing the Interior Department as well as the Bureau of Indian Affairs, which is charged with implementing the federal Indian Gaming Regulatory Act, saying approval of the expansion agreement violates federal rules. The lawsuit states that the changes to Connecticut's original agreement with the tribes "confer a statewide, perpetual competitive advantage" over other gaming operators such as MGM, which is unlawful.

The casino operator would seem to have a good case that at every turn, Connecticut has favored the Pequot and Mohegan tribes by excluding anyone else from participating in developing a casino so it could preserve the 25% cut from slot machines. The Indian casinos have contributed some $8 billion to the state's coffers since they began operating.

MGM's legal challenge will tie up the expansion efforts for years, giving the casino operator a chance to get its Springfield resort back on track. But whether the federal courts will see the argument any differently than other courts have remains a crapshoot.