Like it or not, the opinions of major investment analysts influence stocks tremendously. So when a top analyst slashes a one-year price target for a stock by a whopping 60%, it's usually very bad news.

That's exactly what happened earlier this week with Tilray (NASDAQ:TLRY). Cowen analyst Vivien Azer cut her price target for the beaten-down pot stock from $150 to $60. You might think that Tilray's shares would have tanked on the news. Nope. Instead the Canadian cannabis stock soared 17% on Tuesday (although it gave up some of those gains on Wednesday). Why was a huge price-target cut actually good news for Tilray? 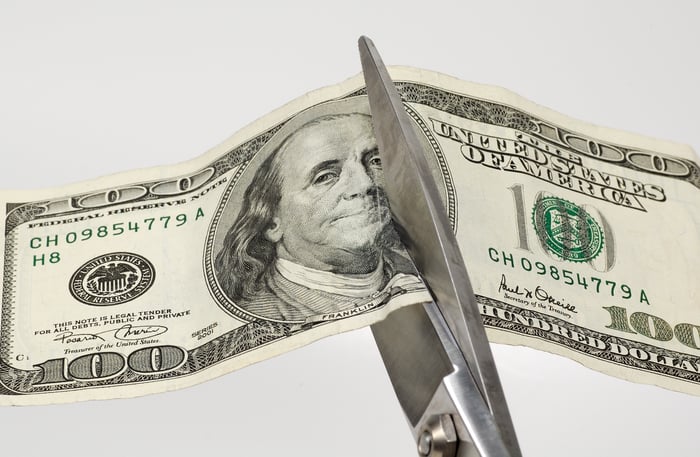 Probably the biggest reason investors received Azer's downward price-target revision so well is that it still represents a huge upside for Tilray. The stock would have to roughly double from its current price to reach Azer's $60 price target.

The Cowen analyst's negative action with the price-target cut still reflects a very positive outlook for Tilray. However, the Canadian cannabis producer hasn't had much positive going on for it lately. After Tilray started off the year with a big gain, its shares plunged more than 60% prior to Tuesday's bounce.

Part of Tilray's problem has been a general malaise for Canadian cannabis stocks. However, Tilray's own lackluster financial performance hasn't helped. The company reported sizzling revenue growth in its second-quarter results, but its net loss came in much worse than expected. A key culprit was the company's huge debt burden, fueled partially by its acquisition earlier this year of hemp foods maker Manitoba Harvest.

Azer's slashing of her price target for Tilray indicates that she acknowledges the position the stock is in now. She wrote to investors that Tilray has arguably "been the most impacted by weak industry supply as its asset-light model was initially overly reliant on third-party supply."

However, this doesn't change her fundamental view of Tilray's prospects. She thinks that Tilray is a buy after its major pullback.

Why is Vivien Azer still bullish on Tilray? The steps the company has taken to increase its production capacity are a major factor. One of the main challenges for Tilray and several of its peers has been related to supply shortages. But with Tilray prioritizing its efforts to boost capacity, it's now in better shape than before.

Azer also noted to investors that the entire Canadian cannabis industry has been held back by too few retail stores. That problem is also being alleviated to some extent as key provinces clear the way for more cannabis retail stores to open.

The Cowen analyst's note to investors mentioned "a lack of novel products" as an issue as well. But that's about to change with the launch of the cannabis derivatives market in Canada. Tilray CEO Brendan Kennedy said in the company's Q2 conference call that Tilray will be ready to roll out "a broad-based portfolio of brands and new innovative cannabis products and formats including vapes, edibles, oral strips, topicals, and beverages" later this year.

In addition to these Canadian opportunities, Azer thinks that Tilray remains well positioned in international markets. The company's Portugal facility gives it a great springboard for the entire European medical cannabis and CBD market. Azer believes that Tilray should win in the U.S. CBD market as well.

Not everyone agrees with Vivien Azer. Vertical Group analyst Gordon Johnson thinks that Tilray is headed for a massive meltdown. Johnson's price target for the stock is only $4, a far cry from Azer's $60. On the other hand, Benchmark's Michael Hickey is more optimistic about Tilray than Azer is, with a one-year price target of $80.

My view about Tilray is less sunny than Azer's or Hickey's, but it's not nearly as gloomy as Gordon Johnson's prediction of near-total collapse. I think that Tilray should achieve some level of success in the soon-to-be-expanded Canadian adult-use recreational market as well as in international markets, including the U.S. CBD market. However, I remain concerned about Tilray's spending, its debt, and its increasingly precarious cash position.

I expect Tilray shares to rise, but I wouldn't go so far as to recommend the stock as one to buy, as Vivien Azer does. My take is that one's odds of success with investing in marijuana stocks improve if one picks only the best and brightest in the industry. There are other stocks, in my opinion, that meet those criteria better than Tilray does.