Shares of start-up battery-electric vehicle manufacturer Workhorse Group (NASDAQ:WKHS) plunged more than 16% in early trading Wednesday -- on no apparent bad news. The stock has recovered a bit since. It's down "only" about 10.9% as of 1:20 p.m. EDT, but still, the big drop on no obvious bad news is a bit disconcerting.

So what is going on here? 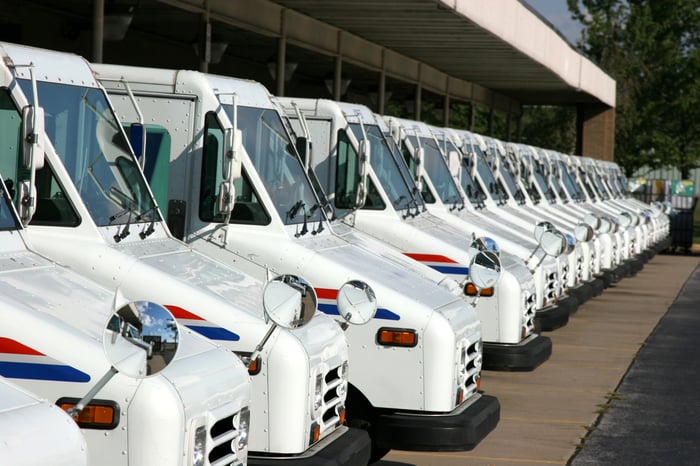 Here at The Motley Fool, we haven't written a lot about Workhorse Group -- not since July, at least, when the stock posted an impressive 18.6% jump on speculation that the company could be in line to win a big contract from the United States Postal Service. Now seems a good time to quickly run down what's up (and down) at Workhorse -- and three things jump right out.

First and foremost, there's the growth potential. Workhorse Group got a lot of press a few years ago when it was announced the company had won a contract to sell 125 hybrid electric delivery trucks to UPS. The potential has only gotten bigger as investors speculate that Workhorse could soon win an even bigger order from the USPS, which is looking for someone to replace its ancient fleet of Grumman postal trucks with 180,000 more efficient electric vehicles -- an order that could be worth as much as $6.3 billion over a term of five to seven years.

Tied into that potential is the belief that Workhorse might be preparing to buy a factory from General Motors (the Lordstown Complex) for as much as $300 million -- a big price tag for a company that doesn't have even $25 million to its name. And finally, there's Workhorse's plan to issue 15.7 million new shares of common stock to raise some of the funds it would need to make the Lordstown purchase -- a share issuance that was announced just last month.

As analysts and investors bet on the likelihood of any of these three events happening and the value of each event, Workhorse shares are alternately surging and falling. Which specific event is behind today's decline in share price? It could be that folks are starting to worry the company won't win the USPS contract or that the Lordstown purchase comes at too high a cost.

If I had to bet, though, I'd say it's most likely investors are simply recalling that Workhorse told the SEC it would sell its 15.7 million shares for no more than $3.52 apiece. With Workhorse stock closing north of $4 a share last night, that implies that new investors will be getting a much better deal on the shares than existing Workhorse shareholders did -- often a disheartening event for existing shareholders.

The closer the share issuance comes to happening, the more likely investors will be to examine their shares and wonder whether they're actually worth as much as they're selling for.