Bed Bath & Beyond's (NASDAQ:BBBY) hodgepodge acquisition strategy never really made much sense, but the upheaval caused by activist investors, which led to the ouster of CEO Steven Temares, now has the home goods retailer looking to sell off some or all of those assets, and maybe even the company itself.

After yet another dismal earnings report in July, which detailed a drop in first-quarter sales and profits and another massive writedown on its assets, interim CEO Mary Winston said part of her four-point plan to turn the company around included a review of its asset base. 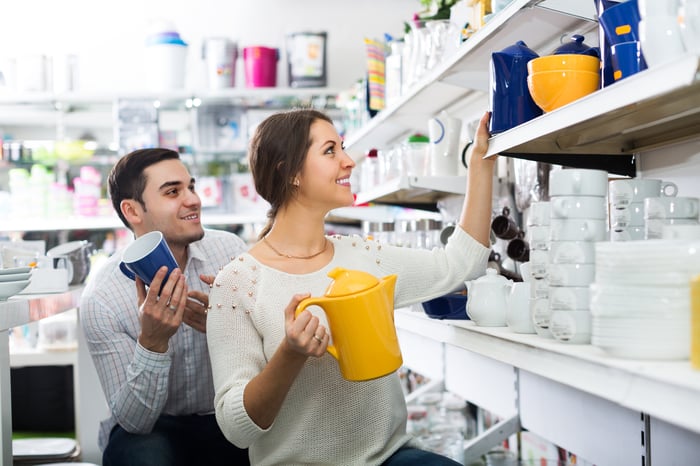 Now the retailer has reportedly hired Goldman Sachs as an advisor to review offers it's received for businesses such as Cost Plus World Market, the online site PersonalizationMall, and possibly even the company itself. The website The Deal says a private equity firm made a pitch to buy the whole company, though it's unknown whether Bed Bath & Beyond and its advisors are considering the offer.

Any of those ideas would sit well with Ancora Advisors, Legion Partners, and Macellum Advisors, the three activist private equity firms that challenged Bed Bath & Beyond to shake up its business earlier this year by getting rid of its CEO and complacent board, particularly the company's founders. They said that together the executives had squandered $8 billion in market value over the past few years, all while receiving hundreds of millions of dollars in compensation.

Those firms also said it was time to break up the businesses that Bed Bath & Beyond had collected over the years.

There has been little cohesion to the retailer's acquisitions, which include brick-and-mortar stores Buy Buy Baby, Christmas Tree Shops, Cost Plus, and Chefs Central, as well as online sites PersonalizationMall, One Kings Lane, and Decorist. The activist investors figured selling them could raise almost $1.4 billion, or around $10 per share.

Maybe because the activist investors never really advocated selling the whole company, the market didn't lend so much credence to the attempt to remake it -- shares got a little bounce at the time but have since continued on their downward trajectory. The news of a potential bid, however, has seen Bed Bath & Beyond's shares rise about 15%, and it's plausible a deal is in the making.

Even with the jump in Bed Bath & Beyond's stock price, the retailer's market valuation is less than $1.2 billion, and it trades at a tiny fraction of its sales and book value.

Its future as a privately-held company

Yet it's a much different retail environment from a few years ago, let alone back when Linens 'n Things went bankrupt and left Bed Bath & Beyond as the sole national home goods store. Today it's competing against Walmart, Target, and a host of specialty furnishings stores like At Home and TJX's Home Goods and HomeSense, as well as Amazon and Wayfair online. Consumers have a range of options that makes Bed Bath & Beyond no longer the first stop for home goods.

Some dramatic and drastic changes are necessary at this retailer. A buyout offer that takes Bed Bath & Beyond out of the public spotlight while the overhaul is completed, instead of its being whittled down piecemeal, may just be the best option.