Whether the market is roaring or showing some signs of potential weakness, it can pay to be on the lookout for great income stocks. Investors planning to add high-quality dividend stocks to their portfolios in September should consider Cisco Systems (NASDAQ:CSCO) and AT&T (NYSE:T).

These two stocks still look attractively valued as long-term investments. Both are backed by entrenched businesses that could benefit from technology trends that create positive catalysts even in the midst of potentially unfavorable shifts in macroeconomic conditions. They also pack dividend yields that are far above the 1.9% S&P 500 index average and forward price-to-earnings multiples that are well below the index average of 17.5.

Read on for a deeper look at why these two central players in information technology stand out as worthwhile dividend stock additions to your portfolio. 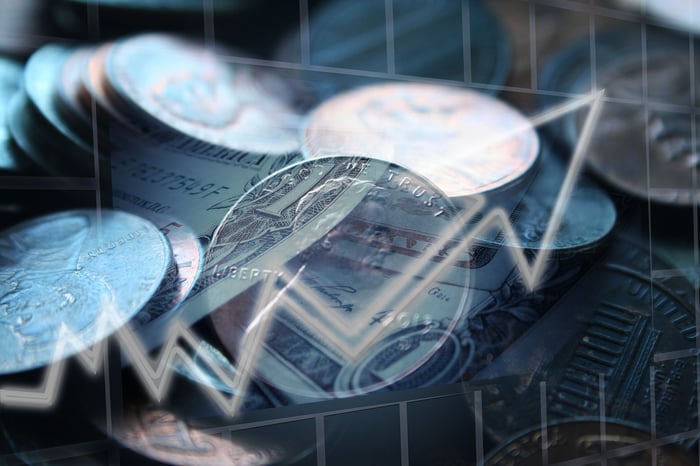 Cisco stock has taken a spill since its fourth-quarter earnings report arrived with disappointing guidance and statements from management indicating weakening macroeconomic conditions in markets including China, the U.K., and the U.S. The chart below, which tracks the stock's performance over the last six months, illustrates the big sell-offs that took place in August and wiped out much of the progress that its share price had made this year. 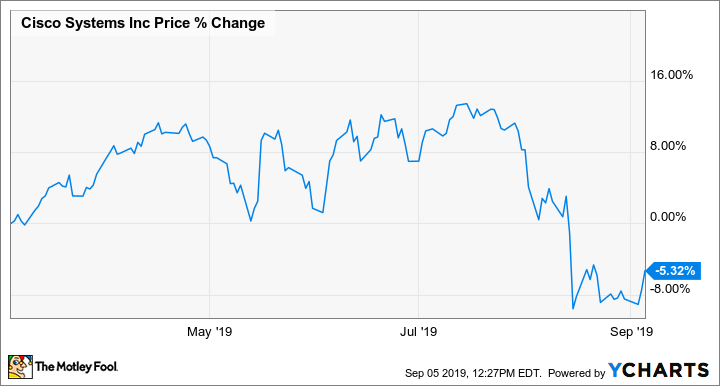 On the other hand, the company is now trading at just 14.5 times this year's expected earnings -- even as analysts have trimmed their profit targets for the current fiscal year -- and the sell-off has pushed Cisco's dividend yield back up to 3%. That looks like an attractive entry point for a long-term investor, even in light of concerns that some volatility for the broader market could be on the way.

Cisco's big challenge in recent years has been to reorient itself for a market that's becoming less dependent on the router and switch hardware that has been the company's bread and butter for decades. To its credit, the company has done an admirable job of building internal products and making acquisitions to help facilitate its pivot to a business model with a stronger focus on software and subscriptions.

This push has helped the company deliver an average of 10% annual revenue growth over the last five years. That's an admittedly meager showing, though it's important to note that Cisco has divested from some businesses during that time. Still, the business's growth in the software-as-a-service segment, the resilience of its core offerings, and management's substantial buyback push have managed to increase annual diluted earnings per share roughly 75% from 2014 to 2019. The company also hiked its yearly dividend by 84% in that period.

Cisco will continue to face pressure in the router and switch market, but the decline should be gradual. The company also has plenty of unrealized upside from the acquisitions push and its pivot to providing security, analytics, and software-based networking services to support 5G and Internet of Things technologies.

Cisco still has a strong balance sheet, even after buying back tons of shares and snatching up companies to aid its next growth phases, boasting a net cash position of roughly $8 billion. Thanks to generating roughly $15 billion in free cash flow last year and keeping its dividend payout ratio at roughly 42%, the network-industry stalwart still has room to keep repurchasing its stock and acquiring new companies to create an earnings-growth engine that can power more solid payout hikes. AT&T, which trades at roughly 10 times this year's expected earnings, has room to outperform the growth targets baked into its current stock price, even with shares priced in the neighborhood of their 52-week high. The stock offers a stellar dividend profile as well, with a yield of roughly 5.7%, despite the fact that shares have put up strong performance this year. Of course, there are also reasons that AT&T trades at such low earnings multiples even as it has rallied roughly 25% so far in 2019.

The company has posted uninspiring sales and earnings growth in recent years, the mobile wireless space has been looking increasingly competitive, and the DIRECTV satellite-television business is shedding subscribers at a concerning clip. Infrastructure expenses and acquisitions to diversify the company's business (AT&T acquired DIRECTV in 2015 for $49 billion, and bought Time Warner and took on its debt in a $100 billion deal last year) have also led to a $162 billion debt load. However, the company is using its ample free cash flow to pay that down and is on track to reduce its debt to $150 billion by year's end, and business still looks pretty sturdy.

With 35 years of annual payout growth (it's a Dividend Aristocrat) and a reasonable 50% free cash flow payout ratio, AT&T has a great track record and is in good position to slowly grow its dividend while also paying down its debt and reinvesting in the business. The dividend picture looks safe, particularly as catalysts like its new strength in entertainment content and the rollout of 5G have a good chance of energizing the business. Warner's selection of big entertainment properties and studios should help AT&T mitigate the effects of declining satellite-TV demand and help transition the business into a new streaming-focused model that it might be able to bundle with its mobile wireless service.

5G will open up a lot of opportunities as well. It should pave the way for an explosion of new video, streaming, and augmented- and virtual-reality technologies that will overlap with its own entertainment offerings and advertising efforts. It should also give AT&T the opportunity to provide service for a wide range of new connected devices, including connected cars and industrial machinery, while ramping up its enterprise services offerings. Beyond the great dividend profile, AT&T has growth drivers that are more exciting than the market appears to think.