The investment case for German industrial giant Siemens (OTC:SIEGY) involves a classic question: Are you happy buying a stock that looks good in long-term value, but clearly has near-term headwinds and some potentially negative news in front of it? If the answer is "yes," then the Munich based company might be attractive for investors seeking high-yielding shares. Let's take a closer look. 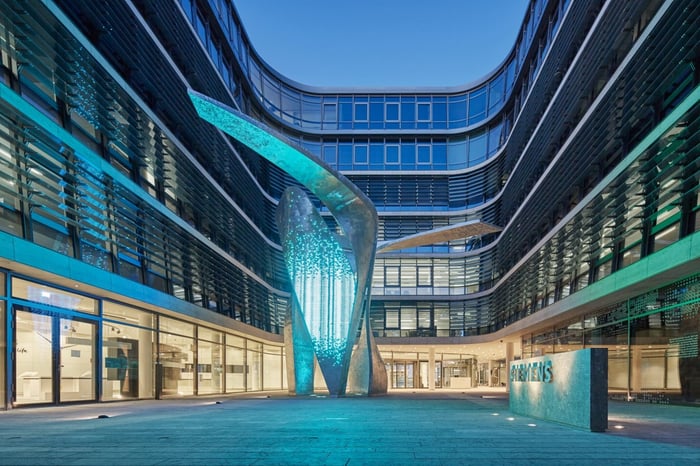 The case for buying Siemens is based on the pragmatic viewpoint that, while the company obviously faces significant and growing near-term headwinds, it's well run, with a solid balance sheet and a 4%-plus dividend yield -- whether you buy the U.S. or international listing. Contrast this with buying so-called risk-free debt such as U.S. 10-year Treasury notes currently yielding around 1.5%, or you could have the dubious pleasure of actually buying 10-year German or French government debt currently trading with a negative yield!

Meanwhile, Moody's has a long-term rating of A1 on its debt, and Standard & Poor's rates it at A+. The S&P definition implies Siemens has a "STRONG capacity to meet its financial commitments but is somewhat more susceptible to the adverse effects of changes in circumstances and economic conditions than obligors in higher-rated categories."

The qualifier in the S&P rating definition leads us nicely to the key bear point about Siemens. Specifically, its economic conditions are, at least in the near term, changing for the worse -- meaning that its growth outlook can be called into question.

The company's recent third-quarter earnings release couldn't have put it any clearer: "The favorable market environment for our short-cycle businesses, which was a material basis for our outlook, has significantly deteriorated in the second half of the fiscal year."

Of course, this sort of commentary is pretty much consistent with what many other cyclically exposed industrial companies such as Rockwell Automation, ABB, and Emerson Electric have been saying.

Indeed, the slowdown is best seen in the orders for its digital industries segment (industrial and process automation) in the third quarter, and to a lesser extent in the weak orders for the smart infrastructure segment (building products, control products distribution and grid systems). Meanwhile, it's no secret that the market for heavy-duty gas turbines (the gas and power segment) continues to be weak.

Moreover, Siemens was rebutted in its attempt to merge its mobility segment (rail infrastructure and rolling stock and traffic systems) with rail-transport company Alstom. This raises some questions over the future of the mobility segment.   Moreover, Siemens remaining investment in renewable energy (with a 59% share of Siemens Gamesa) comes with the usual caveat of investing in the renewable energy industry.

Moreover, the anecdotal evidence of a slowdown from corporations is backed up by leading indicators of industrial conditions in the U.S. and Europe. The chart below tracks the U.S. Institute for Supply Management (ISM) Purchasing Managers Index (a reading below 50 implies a contraction in growth) and the Information und Forschung (IFO) business climate index in Germany. The IFO figures are indicative of a recession in Germany. 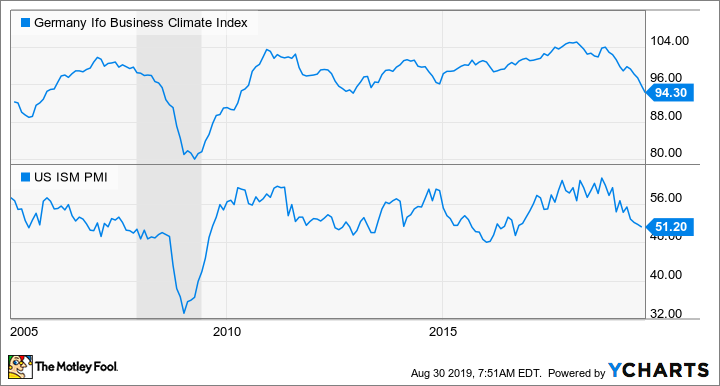 If you can close your ears and eyes to the likelihood of some bad news in the coming year -- possibly starting with full-year earnings at the low end of expectations -- then Siemens looks like a good value for income seekers. Moreover, it doesn't have the instability inherent in the significant changes taking place at ABB, nor does it have GE's debt problems.

In fact, the bond market is so confident in Siemen's fundamental liquidity -- even in the face of an economic slowdown -- that it's been buying 2 to 5 year Siemens corporate bonds on a slightly negative yield recently. It strikes me that if the bond market is willing to lend Siemens money under such conditions, then equity investors should take advantage and buy the stock for its yield alone -- not least because Siemens actually maintained its dividend (in euros) through the last recession.

All told, Siemens is a good option for income investors prepared to ride out some bad news.