The retail industry has been going through a shakeup over the past few years. As e-commerce reshaped the landscape in what has been dubbed the "retail apocalypse," dozens of chains have either filed for bankruptcy or closed a significant fraction of their stores.

The carnage in the consumer-facing portion of the sector has naturally impacted the shopping centers and malls that count retailers as their chief customers. Stock prices for publicly traded shopping center operators have fallen sharply as a result, and The Macerich Company (NYSE:MAC) real estate investment trust (REIT) is no exception.

However, Macerich is in a different position from most other mall operators. It focuses on luxury shopping malls in urban centers, and these have continued to produce strong financial results. Thus, the weakness in the REIT's stock price could present an interesting buying opportunity for investors if the company can weather the retail industry storm. Macerich operates in an enviable niche of the shopping center industry. Founded in 1972, Macerich primarily develops and operates malls in proximity to affluent residential neighborhoods, which allows them to maintain tenant lists that are heavy on the higher-end retailers.

So while an average mall might be anchored by a J.C. Penney and a Macys, and feature reasonably priced stores such as Gap, a Macerich mall is more likely to be anchored by a Neiman Marcus or Tesla dealership, and include brands such as Louis Vuitton, Allen Edmonds, and L'Occitane.

The food courts might include many of the usual fast-food staples, but these shopping centers also attract upscale restaurants and bars. Macerich properties often include entertainment options such as movie theaters and bowling alleys, all of which positions luxury malls more as destinations for a night out as well as places to shop.

The combination of locating near wealthier communities and featuring upscale stores and entertainment options has enabled luxury malls to show much better productivity metrics than the average American mall. Macerich's average mall produces sales per square foot of $746 compared to the industry average mall at $571. Retailers will go to where the shoppers are, and Macerich's superior productivity metrics will continue attracting tenants even when closures and vacancies are rising in less prosperous malls.

Brick-and-mortar retail isn't so much dying as it is adapting. Sure, U.S. consumers are increasingly buying goods online, but most shopping is still done in stores and in person. And while some older brands are having trouble evolving into omnichannel businesses, many are thriving. Meanwhile, a number of newer consumer brands that started as online-only operations have been choosing to expand into the traditional retail arena by establishing a physical presence.

Macerich has started to attract these next-generation consumer brands to its malls. The company counts digital-first brands including Untuckit, Peloton, Bonobos, and Indochino among its mall tenants. Amazon, the quintessential e-commerce company, has also opened physical stores at Macerich malls.

Companies like Macerich and Simon Property Group also have redeveloped parts of malls into hotels, offices, and residential apartments. Macerich has announced some interesting new mixed-use projects at malls that redefine what can be done with shopping center real estate.

At Macerich's Westside Pavillion Mall in Los Angeles, for example, it's repurposing 584,000 square feet into a corporate campus for Alphabet while maintaining 96,000 square feet for retail and entertainment. Macerich has also partnered with Industrious to open co-working spaces at its Scottsdale Fashion Square and Broadway Plaza malls.

By attracting new types of tenants, Macerich is pioneering a model that is less reliant on traditional mall tenants that have been net closing stores. This strategy not only keeps its real estate occupied but also targets new types of shoppers who are interested in next-generation brands, or who would appreciate working within a nice mix-use property.

Macerich is clearly doing some interesting things to keep its malls attractive to shoppers and tenants. The bottom line is that its strategies have been good for business. As the chart below shows, its key operating metrics have continued to trend higher over the last 10 years, even as the retail apocalypse has inflicted financial pain on many of its peers. 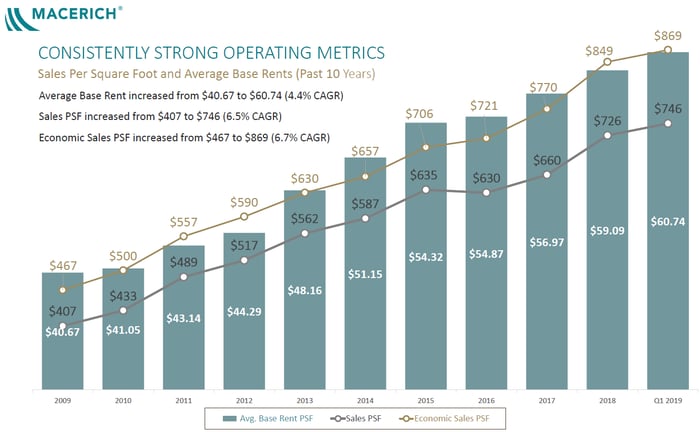 Its mall productivity as measured by sales per square foot has steadily risen, which has given it the leverage to raise its base rents.

Is Macerich a buy?

Macerich appears to be doing everything right as a REIT shopping center operator. It has attractive assets and has positioned them to maximize value. Despite this, its share price has fallen precipitously, along with the rest of the mall sector. The beaten-down stock is now offering a 10% yield. 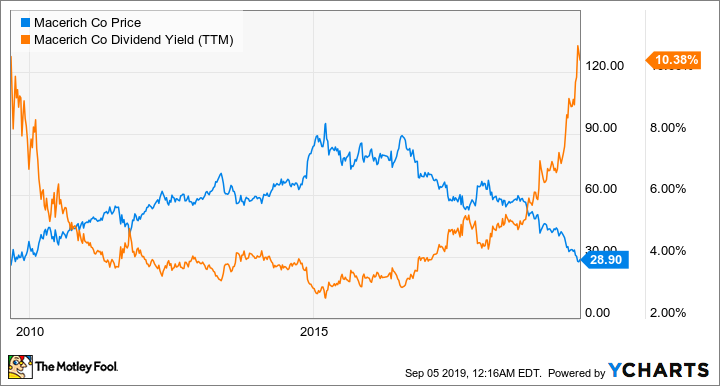 While there is certainly a chance that the retail industry's woes could spread to high-end luxury malls, the recent share price action in Macerich's appears to be more of a buying opportunity. There is good reason to believe that its business model is insulated from the issues that are driving store closures among some retailers, and clearly, its malls are performing well.