The past few years have been difficult for the mall sector. Many national retailers have closed stores, and more than a handful have filed for bankruptcy as competition from online shopping has intensified. Despite the pain being felt in the industry, mall operator Taubman Centers (NYSE:TCO) has managed to hold strong by focusing on luxury malls where shoppers have continued to flock.

Taubman Centers is a real estate investment trust (REIT) focused on shopping centers in the United States. The company owns 26 shopping malls and has one project under development. The company's strategy has been to focus on a small number of highly valuable luxury malls located in densely populated urban centers with affluent households. This strategy is reflected in Taubman's portfolio where the average asset is rated Class A (on a standard real estate rating scale of A++ to D).

Because of its focus on densely populated and affluent locations, Taubman boasts the best demographics among its publicly traded mall REIT peers. According to the company's research, the median yearly household income within a 15-mile radius from its malls is $81,207. This is better than comparable median income rates for Simon Property Group ($73,588), Macerich ($70,193), and others.

The company's real estate assets are valuable enough for activist investor Land & Buildings to highlight the value and call for a sale of the best properties. Specifically, properties including New Jersey's Mall at Short Hills, Florida's Mall at Millenia, and the California's Beverly Center are some of the highest-performing retail assets in the country, boasting sales per square foot near or exceeding $1,000.

Taubman Centers' real estate portfolio represents some of the best shopping centers in the United States. That its assets perform well can be attributed to a mix of exposure to good demographics and the significant investment that has gone into making its properties pleasant to visit. In other words, Taubman may not be the largest operator of shopping malls, but its malls, on average, can be considered high-quality assets. 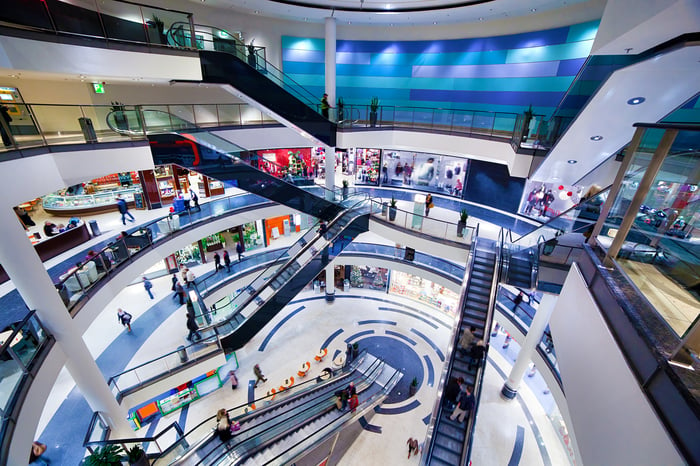 A defining characteristic of a luxury mall is representation from luxury brands. Taubman Centers has representation from a who's who in luxury brands, such as Louis Vuitton (owned by LVMH) and Tiffany. Part of a luxury mall's appeal is that you just can't buy luxury goods as easily online as you can in a store, and given the high price tags, the average shopper would likely prefer purchasing in person.

In addition to focusing on the exclusive luxury brands and upscale department stores, Taubman Centers has begun attracting online-first brands that have not traditionally incorporated physical stores. A popular strategy for emerging consumer brands has been to start with an online-only shopping experience and then supplement that with a handful of showcase stores in prime locations. Taubman Centers' malls claim to have the highest concentration of these online-first brands among its publicly traded peer group. Companies including Casper, Warby Parker, Peloton, and Aritzia have chosen to open locations at Taubman Center's malls. This is a very positive trend that will help Taubman Centers accomplish the dual goals of driving shopper interest and keeping its occupancy levels high.

Taubman Centers has demonstrated earnings growth over the past few years despite issues at retailers. Net operating income is a metric for property-level cash flow, and funds from operations is a metric for business operating cash flow -- both have shone brightly over the years.

For the most recent Q2 2019 financial quarter, Taubman Centers reported net operating income growth of 4.6% and funds from operations growth of 8% over the prior year. The company has continued to see strong demand driving a continued rise in sales per square foot at its malls, which has allowed the company to continue increasing tenant rent.

While several companies, including Ascena Retail Group, have announced store closures this year, Taubman Centers has limited exposure to these struggling retailers. CEO Robert Taubman summed up the company's recent performance this way: "At a time when the ability of mallers to grow NOI [net operating income] is in question, we are producing solid numbers."

Taubman Center's focus on high-end shopping malls has helped to insulate the company from much of the carnage in the mall retail industry that has resulted in store closures and abandoned malls. Although the company could face some pressure in the future if the economy weakens and the consumer pulls back, investors should expect Taubman Centers to continue delivering respectable financial results while it wades through the ongoing industry shakeout playing out at shopping malls.