Roku (NASDAQ:ROKU) is flexing its muscles, thumbing its nose at its rivals, and preparing itself for the donnybrook about to come in sound technology, a free-for-all that will encompass both the streaming video market and the home entertainment world.

It just unveiled two new home audio components, a smart soundbar and a wireless subwoofer. The first is a raised fist of defiance in the direction of Amazon.com (NASDAQ:AMZN), while the other is directed at Sonos (NASDAQ:SONO). 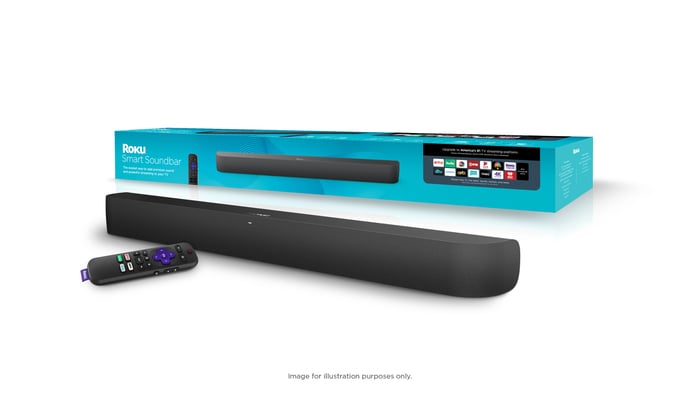 The one to beat

Roku has long been the heavyweight champion in the streaming player market, with the most recent data from Parks Associates showing Roku had a 39% market share at the end of the first quarter of 2019. Amazon has been runner up for almost as long, though lately it has been closing the gap quickly, and now commands a 30% share.

Maybe Roku momentarily took its eye off the prize as it transitioned from solely producing streaming media hardware and started serving as a platform for streaming video. But recent results indicate it's in fine form, and capable of functioning in both worlds.

Roku's smart TVs, which it launched in 2014, amped up its ability to reach more viewers than it could by simply selling a dongle to attach to a dumb TV set. Because its partnerships with Chinese manufacturers TCL and Hisense enabled it to produce feature-rich sets at low prices, at the end of its second quarter Roku smart TVs accounted for one-third of all smart TVs sold in the U.S. CEO Anthony Wood recently told CNBC he wants half of all the world's smart TVs sold worldwide to run Roku's platform.

Roku was able to grow the number of active user accounts to 30.5 million, a 22% increase from the year ago period, but let's face it: Most TVs, whether smart or dumb, are limited in their sound quality. While the newest sets certainly do an admirable job of delivering enhanced sound, more consumers are looking for something approaching theater-quality audio, and to achieve that they've turned to component systems.

While the raft of cheap Amazon Echos can fill a room with sound and carry it to different parts of the home, even outside, it's not exactly symphonic quality, which is why Sonos is looking to establish itself as a leader of premium sound equipment.

Even if its equipment is not as cheap as the Echos and Google Home Minis the market currently finds itself awash in, consumers will get a better result with Sonos mid-tier speakers and components. Its partnership with Swedish furniture maker Ikea even allows it to step into the ring of discounted equipment with a pair of speakers that start at $99.

That's why Roku's smart soundbar and wireless subwoofer are breakthrough products. Both cost $180, and deliver top quality sound from your TV that many rivals will have difficulty matching. Sonos' lowest priced soundbar costs $400, while its high-end one goes for $700. Even Amazon, which also just announced its own new smart soundbar, charges $230.

The key to what ought to be Roku's soundbar success is that it also doubles as a streaming video player (as does Amazon's). For the typical TV, the soundbar is becoming an essential piece of equipment for improved audio -- but being able to stream Netflix or HBO without needing a dongle or box increases its utility affordably.

Not that Amazon is standing still. Its Nebula Fire TV soundbar also comes with similar features, and Amazon also released a new Fire TV Cube and a new 64-inch 4K Fire TV smart TV from Toshiba with Dolby Vision that will be sold through Best Buy.

It's not often you see Amazon playing defense -- though given the sizes of the companies, Roku is actually the underdog here. The bare-knuckle fisticuffs will still be fierce as each brawls for streaming dominance, but Roku is telling Amazon and Sonos it is willing to take on all comers, and expects to come out on top of both.