Entering this year, Boeing (NYSE:BA) seemed to be on schedule with development of the 777X. The company planned to begin flight testing of its revolutionary jumbo-jet replacement in mid-2019, ahead of the jet's scheduled entry into service about a year later.

Unfortunately, delays have been piling up for the 777X program, forcing postponement of the first flight to 2020. Last week, the plane encountered yet another setback, as a cargo door blew out during a high-pressure stress test on the ground. This further reduces the likelihood that the aerospace and defense giant will be able to start deliveries of its newest jet model in 2020.

A series of delays for the 777X

The basic structure of the 777X family is similar to Boeing's existing 777 family of jets. The two biggest innovations included in the new models are new GE9X engines from General Electric (NYSE:GE) -- the largest jet engines ever built -- and folding wingtips. Naturally, those components also represented the biggest development risks for the program. But they are both crucial for boosting the 777X's fuel efficiency.

A few months ago, GE discovered a durability issue related to the GE9X engine's high-pressure compressor, forcing it to redesign a part. Initially, Boeing and GE hoped that it would still be possible to get the engine certified in time to permit flight testing to begin later in 2019. That would have kept open the possibility of delivering the first 777X to Emirates in mid-2020.

But in late July, Boeing acknowledged that the delay in engine certification would force it to postpone the first flight to early 2020. As a result, the best-case scenario is that the first delivery could happen near year-end. 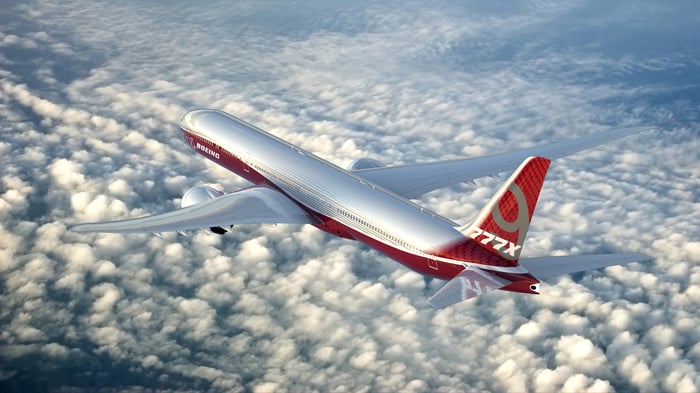 These delays -- along with the substantial resources needed to get the 737 MAX back into service -- also contributed to Boeing's recent decision to pause development of the smaller 777-8 variant. It will instead focus on finishing the larger version of the 777X, the 777-9, which was always scheduled to enter service first and has been a much bigger hit with customers.

While Boeing has had to wait for General Electric to complete its engine fixes to begin flight tests for the 777X, ground testing has continued. One trial, known as an ultimate load test, was conducted last week. It involves bending the wings upward with at least 150% of the maximum force expected under normal flight conditions, while also overpressurizing the cabin to test the strength of the aircraft skin panels, as described by The Seattle Times.

The wings did not break, but a cargo door unexpectedly blew out, forcing Boeing to halt the test early. This is an extremely unusual occurrence for this type of test.

It's too early to know why the cargo door failed. The issue could be as serious as a flaw in the design or as innocuous as the door not having been secured properly. Boeing will need to investigate and figure out what must be done to prevent its recurrence.

Given that GE's part redesign had already postponed flight testing to early 2020, it's possible that Boeing will be able to resolve this cargo door issue with no further changes to the development and testing schedule. But the failed test certainly increases the risk that the first flight will be delayed again and that the 777-9 will be unable to enter service until sometime in 2021.

The cargo door blowout could also lead to increased scrutiny of the 777X from a safety perspective and aggravate the damage to Boeing's reputation from the 737 MAX safety crisis. The ultimate load test subjects an aircraft to forces it should never experience in the air, so there's no reason to believe that the 777X will be dangerous to fly. The purpose of doing these extreme tests on the ground is to ensure that there is a big margin of safety built into the design.

That said, perception counts for a lot these days, and a failed ground test was the last thing Boeing needed.