During the first quarter, in the fuel category, we experienced a favorable fuel margin environment combined with our ability to leverage the implementation of Price Advantage, which is our fuel price optimization tool. These factors enabled us to achieve an average fuel margin of $0.244 per gallon, up nearly 400 basis points from the same period last year. This drove over a 22% increase in gross profit dollars from the fuel category.

CEO Rebelez is referring here to one of the key attack lines in the company's long-term "value creation plan." Retail price optimization, both at the pump and in-store, is something of a found-money exercise for Casey's, as it generates higher profitability on a given sales level, and reduces reliance on volume for bottom-line profits. As I discussed last quarter, Price Advantage centralizes fuel pricing, and avoids some potential pitfalls of pricing at the store level, which is often inordinately influenced by nearby competition.

Price Advantage was launched across all stores last quarter, and while it's still a very young initiative, shareholders can probably sense the benefit Casey's will derive. Higher fuel margin this quarter took the sting out of a dip in fuel volume in the current period. Same-store gallon sales were down 2% over the last three months, as average miles driven in the Midwest declined. Casey's was able to offset the volume slump with much higher profitability, and, as Rebelez points out, this ultimately returned greater gross profit dollars against the prior-year quarter.

More resources will be devoted to the fleet card program

We launched [our fleet program] in late October last year. We currently have over 2,000 new accounts with approximately 11,000 new cards issued. Although the utilization of these cards ramped up slower than we expected, it has gained momentum recently as we focused additional resources around the program.

Casey's fleet program consists of Casey's-branded Mastercards which are accompanied by a suite of tools to manage users, individual fuel spends, and credit limits, among other features. The fleet card is aimed at the small businesses that form the core of the company's commercial customer base -- these organizations typically fall in the two-to-five and five-to-ten vehicle range.

The fleet program has potential as a means to build loyalty and recurring revenue, but its slow start may be due in part to its rebate structure. The company advertises up to 6 cents in rebate for every gallon purchased. However, to reach the six cents reward, a fleet must collectively purchase at least 10,000 gallons in one month. This appears to be out of reach for the typical two-to-ten vehicle fleet.

Most businesses, then, will likely see more typical rebates of one cent (earned with 1 to 499 monthly gallons purchased) to two cents (earned with 500-1,499 monthly gallons purchased). This may prove an underwhelming incentive structure, as a wide array of business credit cards on the market offer cash-back rewards or travel affinity points which have greater economic value than the first few tiers of Casey's fleet program.

Nonetheless, Casey's loyal cadre of customers may continue to sign on as management shifts more marketing resources to the fleet program, and perhaps adds additional perks in the future. 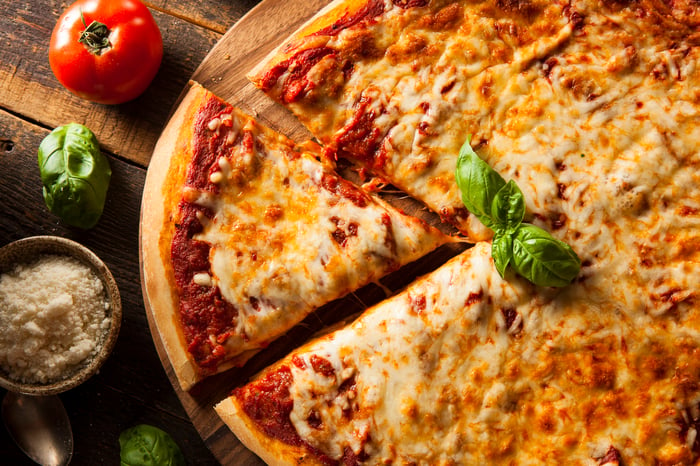 Digitally enabled commerce will be a margin builder

We continue to progress with our digital engagement program and have completed several key milestones over the last quarter...[W]e rolled out our new mobile app during the first quarter. This platform provides an enhanced guest experience by streamlining the ordering and checkout process and allowing guests to pay online. In addition, the system automatically engages cross-sell opportunities for guests during every order.

Rebelez observed that 28% of pizza orders are now transacted online via the web or mobile devices, against 18% just a year ago. Casey's prepared foods and fountain drinks comprise a smaller segment by revenue than either gas or groceries. But the business of selling pizza and soft drinks is by far the most profitable for the chain: In the first quarter, the prepared foods and fountain segment sported a gross margin of over 62%, versus 31% for grocery and other merchandise, and 9% for fuel.

As it analyzes data from its new digital ordering channels, Casey's is also preparing to launch a digital loyalty program to further secure its customer base and boost revenue. The company will begin with an employee pilot in the second quarter, which will extend to a store pilot in a defined geographic area, followed by a rollout to all stores. Casey's intends to utilize customer-specific marketing strategies once the loyalty platform is integrated with current e-commerce capabilities. Rebelez stated management's belief that the loyalty program will eventually drive both customer traffic and average check size higher -- a basic building block for food stocks seeking to deliver value to shareholders.