The 737 MAX debacle has grounded Boeing (NYSE:BA) narrow-bodied single-aisle airplane orders. However, despite the MAX emergency, the on-going trade war with China, and global economic slowdown concerns, Boeing has still managed to bring in orders for its wide-bodied airplanes. From January to July, Boeing brought in 92 wide-bodied aircraft orders. The 787 Dreamliner received 50 orders, its 777 model received 32 and its 767 model received 10.

June's Paris Air Show proved to be successful for the aircraft manufacturer in spite of the recent struggles. Korean Air committed to buying 20 jets (the 787-9 and 787-10 models). The deal is estimated to be worth $6.3 billion and the company is set to deliver the jets between 2023 and 2027. The agreement came at a much needed time as sales of the narrow-bodied 737 MAX planes have dampened since mid-March. Before the 737 MAX fiasco, the aircraft accounted for nearly 70% of its overall commercial aircraft orders. Another deal that followed the Air Show was with Saudi budget carrier airline Flyadeal which committed to buying 50 737 MAX jets. 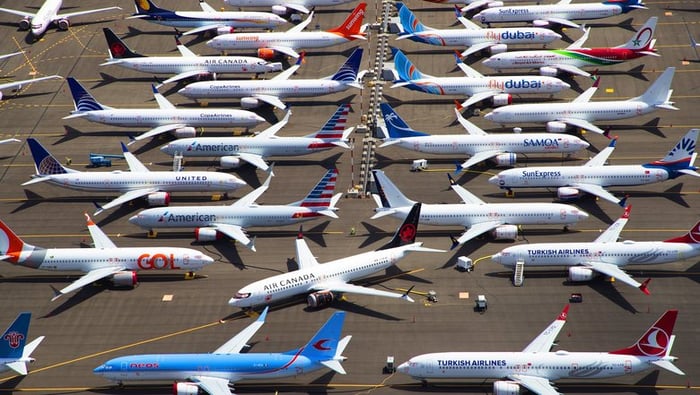 Boeing's major concern right now is going to be getting the 737 MAX aircraft off the ground and back into the skies, something that hasn't been accomplished since mid-March. The good news is that no significant problems have arisen since June. Boeing is set to turn in its proposed software update to the Federal Aviation Administration next month. An FAA panel is also expected to release a new protocol for the training of 737 MAX pilots this month. Pilots of the 737 MAX will be invited to participate in a series of simulator tests to recertify the jet for commercial use. The FAA said that it had not specified an exact number of hours required to fly the 737 MAX but that the candidates would be a cross-section of line pilots with experience with the MAX. The 737 MAX's return to the skies is still undecided at the moment. This means Boeing's wide-bodied jet orders are vital in ensuring growth in cash flow, earnings, and revenue.

Boeing's stock dipped June 27 on the news of delays months after the second 737 MAX crash. It's worth noting it has recovered greatly even though there has been no public announcement about restarting 737 MAX flights. In the last five weeks, the stock has risen from around $320 per share to around $378 per share. Since it has risen approximately 18% over the past five weeks, any hiccups or delays in the 737 MAX's return to the air could potentially cause investors some pain once again.

However, a large commercial aircraft backlog of around 5,900 airplanes provides growth visibility. As shares continue to climb closer to their pre-grounding high from March 2019, the market is indicating that the 737 MAX could be back in the skies soon. Muilenburg said at an investor conference Wednesday that the company continues to work with the FAA and regulators around the globe to gain permission for the jet to be back in service. He also stuck with his assessment that the plane will fly again in Q4. Optimistic words from Boeing's CEO has investors believing better news is on the horizon.