The streaming service is benefiting from a growing list of quality programs.

Hulu is proving that all it takes is one breakout hit to really make it. The subscription streaming service was launched to the forefront by The Handmaid's Tale, the first streaming show to win an Emmy for best drama, and it has since gone on to define the kind of quality shows that are possible.

Hulu also has a number of other top programs that are drawing in subscribers, including Castle Rock, The Act, Shrill, and Ramy. But The Handmaid's Tale, with its dystopian future, remains the channel's biggest draw. So much so that Hulu succeeded in surpassing Amazon.com (AMZN -0.64%) as the third most popular channel on the Roku (ROKU 1.22%) streaming platform. 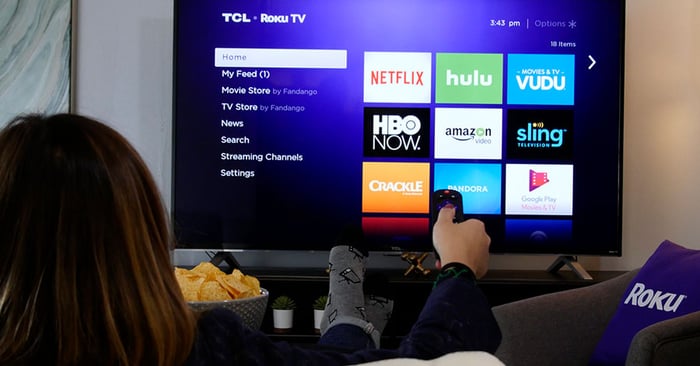 The place to see and be seen

As the leading streaming-device maker, whose own Roku Channel is also the biggest free movie-streaming channel on the platform, the tech company is quickly becoming a premiere destination. Because of the broad distribution of its devices -- whether it's a dongle that hangs off the TV, one of its branded television sets, or now a sound bar with the Roku platform built in -- a channel appearing on Roku is getting in front of tens of millions of eyeballs.

That's important because the number of people using Roku is also attracting advertisers, creating a virtuous ecosystem that allows all to flourish. Hulu being in the top three is a major achievement, particularly as it comes from displacing Amazon, which has spent billions acquiring its own portfolio of original content, though the payoff has been hit-or-miss.

Netflix (NFLX 0.13%) remains the most popular channel on Roku, as it has been for years. Even back in 2014, in one of Roku's earliest published rankings, the streaming service was the top destination for viewers. That's unchanged today, and Netflix is followed by Alphabet's YouTube, Hulu, Amazon, Spectrum TV, and Sling TV, rounding out the top six.

While quality programming has benefited Hulu's rise so far, it may be parent Disney (DIS -2.31%) launching its own streaming service in November that pushes it to its next stage of growth.

Disney+ is being bundled with ESPN+ and Hulu for less than $13 a month, cheaper than Netflix but offering subscribers a lot more. Not only does a subscriber get the entire Disney movie and TV catalog, but Marvel and Star Wars come with it, too. Now, the top sports channel and a leading movie channel will be part of it.

By some measures, Hulu's programming is the best around, even better than Netflix. Business Insider recently noted that streaming search engine Reelgood analyzed five platforms and ranked the relative quality of their programs. While such lists are undoubtedly subjective, despite Hulu having smaller content libraries than either Netflix or Amazon Prime, it was able to top both in quality along with beating HBO and Showtime, too.

No doubt Disney itself will quickly climb the ranks of the most-watched channels on Roku. It's going to be a tough service to beat, arguably more so than the many other streaming services that are about to launch. But that will also bring in more potential Hulu subscribers as well, and that ought to help it place higher on the list, too.

Netflix is still a quality service and one that will be difficult to surpass, but with Disney pulling even more programming from Netflix next year, it might not be long before Netflix begins falling down the Roku list, and perhaps one day Hulu will even surpass it.