The famously frugal budget airline has found a way to give customers a little more legroom while still squeezing lots of seats onto each of its planes.

Under long-serving CEO Ben Baldanza, Spirit Airlines (SAVE -2.89%) became massively profitable while growing rapidly, thanks to a relentless focus on minimizing costs and maximizing ancillary revenue. Running a customer-friendly airline wasn't a priority. Baldanza believed that customers would endure just about anything to snag the carrier's low fares -- and for many years, Spirit's incredible financial performance seemed to confirm that view.

However, over the past five years or so, rival carriers have become far more aggressive about price-matching. As a result, Spirit's low fares became less of a competitive advantage, making its customer-unfriendly polices more of an impediment to growth. In response, Spirit Airlines began to focus more on reliability and customer service after Bob Fornaro became CEO in early 2016. That has continued this year under new CEO Ted Christie. In keeping with this new focus on offering a better customer experience, Spirit recently unveiled new seats that are supposed to be more comfortable for passengers.

Last Monday, Spirit Airlines announced that it had selected new seats for both its economy cabin and its first class-like "Big Front Seat" product. The Big Front Seats will feature additional memory foam in the seat cushion along with an "ergonomically improved headrest."

More importantly, the comfort improvements will extend to economy seats. By utilizing a slightly rounded seat shape and moving the literature pocket to a higher position, Spirit Airlines' new seats will offer about two inches of additional legroom. Other enhancements to the seat include thicker padding, additional pre-recline -- customers can't adjust the amount of recline on Spirit's seats -- and better lumbar support. Customers stuck in the middle seat will benefit from an extra inch of seat width. And unlike Spirit Airlines' current economy seats, the new seats will feature full-size tray tables. 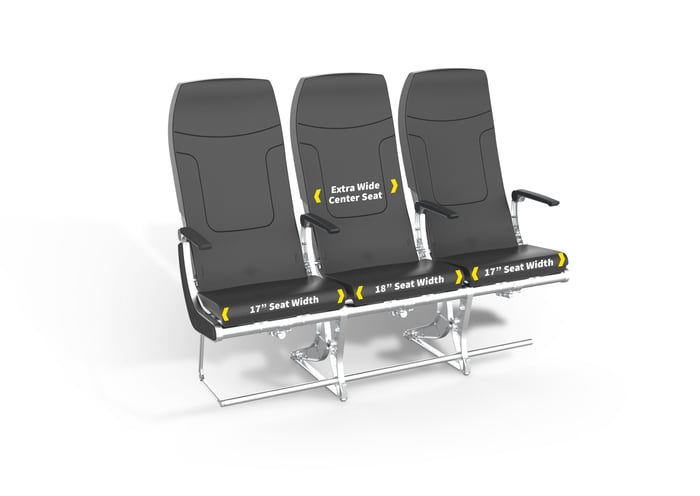 These new seats will be installed beginning in November on all new Spirit Airlines aircraft deliveries. Given the carrier's rapid growth rate, the new seats should become a common sight fairly quickly.

The focus on cost containment hasn't gone away

Spirit Airlines has shown under its new management team that it is willing to make customer-friendly investments, but it is still an extremely frugal company. Spirit isn't deviating from that approach with its plan to introduce these upgraded seats.

First, Spirit Airlines will keep its seat pitch -- the distance between any given point on a seat and the same point on the seat in front of it -- at an industry-low 28 inches. The airline counters that seat pitch is an outdated metric that ignores the impact of seat design on legroom. To be fair, even its existing seats are adequate for customers up to about 5-foot-9 in height. The new seats could work reasonably well for people a few inches taller than that.

Nevertheless, Spirit's new economy seats will probably still be very uncomfortable for anyone more than six feet tall and will offer less legroom than industry-standard seats at a more-typical 31 inches of pitch. (Editor’s note: Spirit Airlines has contacted us to note: “Our new seats have been certified by a third-party validator, the Chartered Institute of Ergonomics and Human Factors, to comfortably fit passengers up to 6’4”.”)

Second, Spirit Airlines hasn't decided yet whether to retrofit its existing aircraft with the new seats. Investing in upgraded seats for new jets for which seats must be purchased anyway is a much smaller commitment than replacing the perfectly functional (but not very comfortable) seats on Spirit's current fleet. Without a retrofit program, it could take five years or more just for half of Spirit's fleet to feature the new seats.

After making big strides last year, Spirit Airlines' reliability has suffered in 2019 due to an ill-advised attempt to boost aircraft utilization. This will drive unit costs higher while hurting unit revenue -- and will therefore have a severe negative impact on the company's profitability, particularly during the third quarter. Meanwhile, it has taken longer than expected for Spirit to roll out inflight Wi-Fi and an upgraded loyalty program.

Despite these setbacks, Spirit Airlines is making smart moves to attract new customers while maintaining its low cost structure. Keeping costs down in order to stimulate demand with rock-bottom fares is core to the carrier's business model. Leaving aside its recent breakdown in operational reliability -- which should be easy to fix going forward -- Spirit has done a good job of making the flying experience a little easier on customers without driving up costs.

The upgraded seats it is installing on new planes (albeit not on its existing fleet, at least for now) represent another step in the right direction. They won't lead anyone to mistake Spirit for an upmarket airline. But the new seats should further enhance Spirit Airlines' value proposition as a carrier offering good-enough service at unbeatable prices.