It's unusual this time of year, but it's coming.

The crude oil market has fallen over the past several months, and that gave summer drivers an unexpected surprise in the form of lower prices at the pump. Yet thanks to the latest news from the Persian Gulf, that's about to change, and drivers can expect a big move up in gas prices in the near future.

Drone strikes against Saudi Arabia's energy infrastructure resulted in substantial damage to key assets, forcing the shutdown of a significant portion of the oil giant's production facilities. That had an immediate impact on prices in the energy futures markets. Crude oil prices jumped 10%, and gasoline futures climbed as much as $0.15 per gallon in global trading.

That move higher is unusual from a seasonal perspective. Usually, prices at the pump start to drop after Labor Day, as the summer driving season comes to a close. A year ago, gas prices fell almost $0.70 per gallon between early October and January as energy companies rebalanced supply and demand for gasoline. Coming into this fall, the trend at the pump was already in favor of drivers, and many saw those declines continuing. 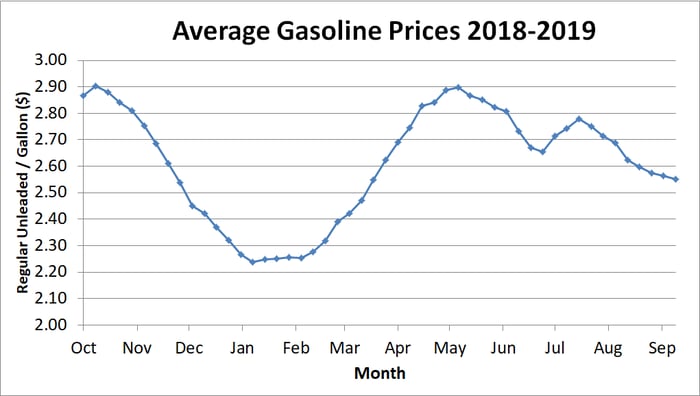 The Trump administration has pledged to open the Strategic Petroleum Reserve as necessary to avoid near-term market disruptions. Yet while that might prevent an even larger spike in gasoline prices, it probably won't keep drivers from paying somewhat more to fill up in the weeks and months ahead.

Relatively low gas prices in recent years have played a key role in keeping consumer confidence high and maximizing the amount of discretionary income that Americans have to spend on other things. The anticipated move higher in gasoline prices that will result from the Saudi attack won't by itself send the U.S. economy into a recession. But as more economists have looked critically at how much longer economic expansion could continue, higher prices at the pump would be just one more item on the growing list of concerns that could create bigger challenges for consumers in the near future.