Midstream giant Enterprise Products Partners sees a very bright future for U.S. energy and is ready to play its part in that growth.

The United States oil industry, once in a state of decline, has reversed course and is expanding. This isn't a new story, as new drilling techniques have materially changed the industry's prospects. The growth so far has been huge and has even affected the global energy ecosystem. According to midstream energy bellwether Enterprise Products Partners (EPD 0.04%), however, the story is only just getting started. Here's why this energy player sees a bright future ahead for U.S. oil and its own business.

Saudi Arabia is the world's largest exporter of petroleum. In 2018 it exported 7.9 million barrels of oil per day (MMBPD). That's a big number, particularly when you compare it to the roughly 2 MMBPD that the U.S. sent out to the world that year. But here's the thing: The ability to export oil from the United States was limited up until 2016, when a ban on oil exports in place since 1975 was finally lifted. 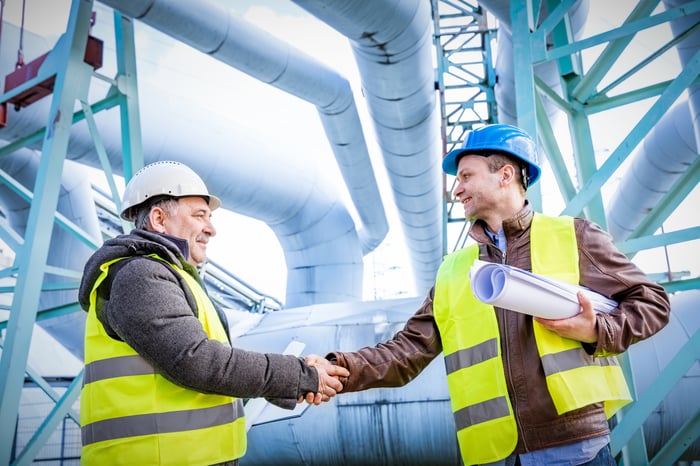 Basically, U.S. exports have gone from nearly nonexistent to 2 MMBPD in a very short time. And the number is set to keep growing, with midstream limited partnership Enterprise highlighting that oil exports had reached 3.7 MMBPD by June of 2019. That's an 85% increase, though this is actually mixing apples and oranges, as the 2018 number is a yearly average and the June 2019 number is a monthly figure. The point, however, is still valid...U.S. oil exports are heading higher.

How high will it go?

According to Enterprise, the U.S. is at the very beginning of a huge export boom. The partnership projects that U.S. oil exports will be just shy of Saudi Arabia's 2018 tally by 2023, inch past it in 2024, and reach a giant 8 MMBPD in 2025. Step back for one moment and think about those numbers. In less than a decade, U.S. oil exports could be four times what they were in 2018. That's a massive change in a short period of time.

With oil prices remaining volatile, smaller players in the U.S. onshore drilling space are pulling back. That's bad for Enterprise's projections, but global giants with the cash to weather the ups and downs of the energy market are stepping in and ramping up their production.

For example, global energy giant BP paid roughly $10 billion to buy U.S. onshore assets from BHP so it could expand its exposure to the space. Chevron's production has been buoyed by shale drilling as it bets heavily on the space. And ExxonMobil thinks it can double its oil production from U.S. onshore resources by 2024, with plenty of room to grow from there.

According to Enterprise, in key oil regions in the U.S., the oil is roughly similar to Brent crude. That means U.S. oil from these areas is a good fit with foreign processing facilities and ripe for the export market. And, equally important, oil is the driving force financially when it comes to U.S. drilling, since natural gas remains historically cheap. So the oil factor appears to be the issue to watch when it comes to U.S. drilling growth.

But where does Enterprise fit into this equation? First, it is positioned to take advantage of the U.S. export machine as it grows in the years ahead. It has a massive network of pipelines, storage, and ports to facilitate exports. And these assets have the capacity to handle more volume. That's particularly true on the oil side of things. 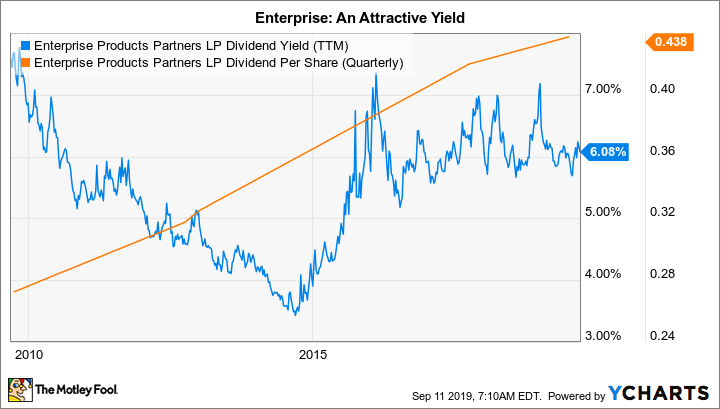 The partnership's outlook, meanwhile, has led to expansion plans that will allow it to keep pace with the increasing export trend. It has projects in the works to expand its export capacity in late 2019 and in 2020. These projects are a big piece of the company's $6 billion in capital spending plans through the end of the decade. But Enterprise's reach is huge, offering many ways to benefit from increasing exports. For example, it is building additional pipelines to help move energy from where it is drilled to the ports where it gets sent out to foreign markets. The partnership's top and bottom lines should grow as each of its investments come on line and start to generate cash. And beyond 2020 it thinks there's another $5 billion to $10 billion worth of capital investment opportunities, with exports being a key driver of demand.

A good way to play it

Enterprise is one of the largest and most diversified midstream companies in North America. It has a long history of expanding its business in a conservative manner, while rewarding investors along the way with steady distribution growth. If its estimates are even close to the mark, there's no reason to think that will change. With the units yielding more than 6%, income investors would do well to take a close look at Enterprise and its export predictions today.