Darden Restaurants (NYSE:DRI) is scheduled to issue its scorecard for the first quarter of fiscal 2020 on Sept. 19 before the opening bell. The Orlando-based restaurant holding company, best known as the owner of the Olive Garden franchise, has seen shares rise by nearly 30% year to date on a total return basis. Below, let's tackle four items that will set the tone for the fiscal year -- and potentially affect share price -- when Darden releases its quarterly report.

In fiscal 2019, Darden posted revenue of $8.51 billion, an increase of 5.3% over the prior fiscal year. Management projects a year-over-year top-line improvement in 2020 of 5.3% to 6.3%. In other words, the company is aiming to maintain its progress, adding incremental annual growth of roughly one percentage point at most. Investors will anticipate a vigorous start to the year in the upcoming release, as the first quarter tends to be one of Darden's busier periods from a sales perspective. In the first quarters of fiscal 2019 and fiscal 2018, the organization posted year-over-year sales increases of 6.5% and 12.9%, respectively.

Similar to a host of rival restaurant stock investments, Darden's comparable sales growth will prove a critical number in its earnings filing. Darden has seen a recent trend of positive comparable sales in its Olive Garden and Texas LongHorn segments -- "comps" at these chains increased by 3.9% and 3.3%, respectively, in the last fiscal year. Similarly, in the fine-dining segment, The Capital Grille improved comps by 3.7% last year, while Eddie V's lifted comps by 2%. Yet comparable sales declined in each of the four chains within Darden's remaining segment in 2019, by an average of 2.2%.

Management expects overall annual comps growth of 1% to 2% in fiscal 2020. Investors' attention will be trained not only on Olive Garden and Texas LongHorn comps, but also on the performance of Cheddar's Scratch Kitchen, which posted the worst yearly comps performance among Darden's eight brands last yea at negative 3.4%.

Basic restaurant execution issues have hurt Cheddar's traffic and pushed its comps into the red over the last several quarters. Management has instituted a number of operational and analytics-based improvements to lift the franchise up to the performance level of the aggregate Darden portfolio. Shareholders will look for better results to materialize at Cheddar's at some point in the new fiscal year. 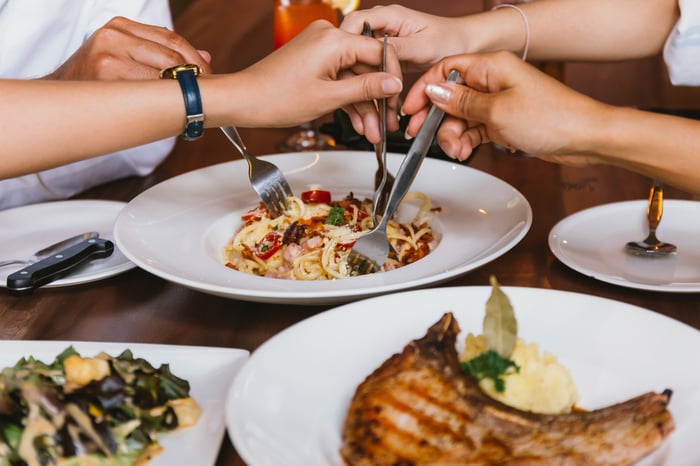 The disadvantage of steady if not spectacular comparable sales growth is that revenue expansion must depend primarily on new restaurant openings. Restaurant growth is another pertinent theme for Darden shareholders to follow throughout the fiscal year. Net of closings, Darden expects to open 50 new restaurants this year, an amount equal to roughly 3% of its 2019 year-end base of 1,785 stores. Taking into account projected restaurant closings, the company aims to finish the year with 44 net new stores, representing a decent 13% acceleration over the 39 units opened in fiscal 2019. Management typically provides some additional clarity on openings related to brands and locations in its post-release conference call with investors.

Darden has impressed investors over the last few years with the stability of its cash flows, which are derived from a portfolio that's diversified across a range of fast-casual and fine-dining formats. Excess cash flows are utilized effectively: In the fourth quarter, Darden raised its quarterly dividend by 17% to $0.88, and its payout now yields approximately 2.8% annually based on its current share price. Last year, the company generated $1.27 billion in operating cash flow on $8.5 billion in sales, allowing it to return $578 million to shareholders between dividends and share repurchases.

Coupled with steady sales growth, a healthy restaurant margin has been one of the most important factors underpinning Darden's cash flow. The company's restaurant margin (i.e. total sales less direct restaurant expenses, including food and beverages, labor, rent, etc.) has fluctuated between 21% and 22% over the last five years. In fiscal 2019, Darden's restaurant margin of 21.7% enabled it to post a net profit margin of 8.4% for the year -- an admirable profit level for a restaurant holding company. Look for restaurant margin to fall near 22% when the company publishes its first-quarter report on Sept. 19.