Over the past few years, cloud-based software stocks have been among the biggest winners in the market. These relatively young companies arrived with sophisticated offerings drawn from a "blank sheet of paper," allowing them to design modern software for cloud environments without having the burdens of legacy code and systems.

This model has been fairly disruptive, with many new cloud software companies growing 30%, 40%, or 50% or more. While these businesses aren't making much in the way of profits yet, their share prices have still skyrocketed, as investors continue to see paths to massive profits down the road.

So it was a bit surprising when, in September, several of these very same stocks were sold off, some dropping in value as much as 25% or more. This wasn't due to anything in particular about their businesses, but rather due to valuation concerns and an overall rotation into beaten-down value stocks.

These new tech stocks may still not exactly be cheap, but they never were. But if you're looking to add some software and growth stocks to your portfolio at reduced prices, here are four names that deserve a long look right now. 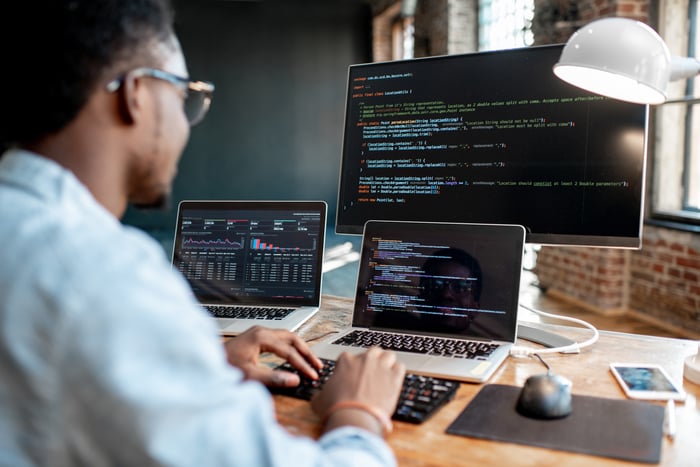 Twilio (NYSE:TWLO) is a high-flying platform stock that allows companies to seamlessly and securely communicate with their customers. Twilio's technology, for instance, allows ride-hailing drivers to communicate with riders via text or voice through the app, all while keeping both phone numbers anonymous. Twilio's newer Flex offering is a new type of customer service software platform. The company's 2019 acquisition of SendGrid also gave Twilio a smart email communication platform to supplement Twilio's core text, voice, and video services. Twilio uses also include an SMS two-factor authentication service, a huge trend in today's cybersecurity world.

Last quarter, Twilio continued to churn out amazing financials. Revenue rose 86%, though some of that was helped by the acquisition of SendGrid. Dollar-based net expansion, which measures how much existing customers spent versus last year, was a strong 140%, accelerating from 137% in the year-ago quarter.

Twilio continues to run its business at around breakeven on a cash flow basis, though it does operate at a significant loss on a generally accepted accounting principles (GAAP) basis, due to significant stock-based compensation. While Twilio's quarterly revenue has increased about 3.2 times in the past two-and-a-half years, its research and development expenses have surged 3.7 times, and its sales and marketing expenses have surged a whopping 4.3 times.

That's OK, as the company is clearly investing as much as it can for the long-term growth opportunity. New products, new use cases, and international expansion should all help Twilio grow in the years ahead. While the stock isn't cheap by any means, now may be a good time to look at this communications leader, as it is currently down about 26.7% from its 2019 highs.

DocuSign (NASDAQ:DOCU), unlike the other three stocks in this list, actually has not been priced down recently, and still sits near all-time highs after a recent sterling earnings report. The company helps digitize and automate the laborious and formerly manual process of signing agreements, a business function that was one of the last to get the digital treatment.

DocuSign's core e-signature product is doing well, but the real acceleration in growth and bookings came from the document agreement cloud service, which manages all phases of the document lifecycle and is integrated with 350 third-party apps.

Revenue rose a strong 41% last quarter, with a solid net expansion rate of 113%. Even more encouraging was the company's success with larger enterprises, where DocuSign increased its customer count by 31% year over year, while higher-value deals above $300,000 grew an even stronger 50%. Bookings, which represents the change in revenue plus the changes in contracts that booked for future periods, rose 47%. Since that's higher than revenue, it portends even better times ahead.

Some advantages for DocuSign are its leading 60% market share, the fact that it is free-cash-flow positive, and that it still has a very large $25 billion addressable market, compared to just $827 million in revenue over the past 12 months. 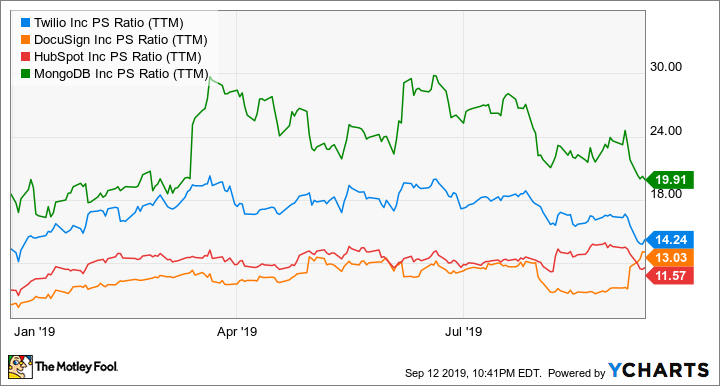 Hubspot (NYSE:HUBS) is a business software firm working to transform from a "product" to an "ecosystem." It makes inbound sales and marketing software for small- and medium-sized businesses, and it delivered a very impressive earnings report in August that handily beat analyst expectations. However, the September software swoon knocked the stock right back down to where it was before that earnings release.

Last quarter, sales were up 33%, with new customers up an even greater 35%. Since HubSpot serves small- and medium-sized businesses, it will tend to have a higher churn rate than other companies, as some customers go out of business every year. Still, strong new customer growth was a very positive sign.

Another positive was that the company's margins expanded strongly. Adjusted (non-GAAP) operating margins increased to 8.4% last quarter, up 3.1 percentage points from the 5.3% posted a year ago. In addition, the company is strongly free-cash-flow positive, with $34 million in the first half of 2019. Though its GAAP net income (counting stock-based compensation) was negative, its GAAP net losses narrowed in the quarter.

Hubspot also just held its annual INBOUND 2019 conference, at which the company unveiled a whole host of new products and services, as well as a new app marketplace that integrates Hubspot software with over 300 third-party apps. That kind of customer-first innovation should keep the good times rolling for this high-growth software company.

I was initially very excited about document-based database vendor MongoDB (NASDAQ:MDB) when it launched its IPO in late 2017. However, after buying the stock and making a quick 60% in less than a year, I sold a majority of my stake after hearing that Amazon (NASDAQ:AMZN) was making a MongoDB clone.

That turned out to be a, uh, big mistake, as MongoDB went on in short order to more than double from the already-high levels I sold at. Amazon's copycat product hasn't seemed to be able to match MongoDB's leading document-based architecture or stop the young company's torrid growth.

However, with the recent sell-off in the software space, MongoDB's stock has dropped about 29% from its all-time highs. I was fortunate to hang on to at least some shares over this time, and the recent sell-off has me thinking of re-upping my stake. Last quarter, MongoDB grew a blistering 67%, with even more impressive 71% software subscription growth. The company's cloud-based Atlas offering is clearly a hit, up 240% year over year.

MongoDB has also achieved a remarkable 18 straight quarters of at least 120% expansion rates and is seeing increased adoption by larger enterprises for more critical database workloads. Though the stock still isn't cheap -- it trades at 20 times sales, even after the sell-off -- MongoDB offers an incredibly "sticky" product with a huge addressable market. That means any time it sells off 30%, prospective investors should look to potentially add some shares.