Please ensure Javascript is enabled for purposes of website accessibility
Log In Help Join The Motley Fool
Free Article Join Over 1 Million Premium Members And Get More In-Depth Stock Guidance and Research
By Matthew DiLallo - Sep 17, 2019 at 7:16AM

The midstream giant’s acquisition of SemGroup is all about bolstering its oil transportation capabilities and export capabilities.

Energy Transfer (ET -1.51%) announced this week that it would acquire SemGroup (SEMG) for $17 per share, an eye-popping 65% premium to its closing price last Friday. The cash-and-stock deal valued the midstream company at $5 billion, including the assumption of debt.

While the acquisition of SemGroup will do several things for Energy Transfer, the main driver of this deal is how it will bolster the company's oil transportation business. Here's a look at why Energy Transfer is making a $5 billion bet on crude oil. 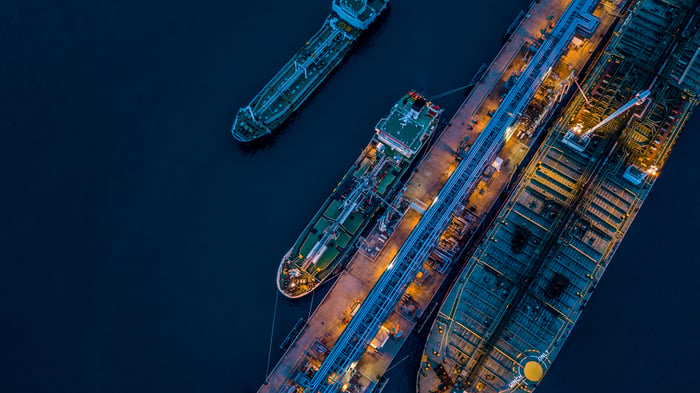 Energy Transfer's acquisition of SemGroup will significantly enhance the company's scale in several important production basins and market centers. Because of that, it will increase the connectivity of the company's crude oil and natural gas liquids (NGLs) business.

At the heart of the deal is SemGroup's Houston Fuel Oil Terminal Company (HFOTCO), which is a world-class crude oil terminal on the Houston Ship Channel. That facility can store 18.2 million barrels of oil and has five deepwater ship docks from which it can export oil to global markets. Supporting the terminal are stable take-or-pay contracts that provide predictable cash flow.

In addition to HFOTCO, Energy Transfer will pick up crude oil and NGL gathering assets in the DJ Basin of Colorado and Anadarko Basin in Oklahoma and Kansas. The company will also get some crude oil and NGL pipelines that connect those two regions to oil terminals in Cushing, Oklahoma, which is a major oil hub. Finally, Energy Transfer will gain a significant oil gathering and transportation business in western Canada.

Although Energy Transfer is paying a substantial premium for SemGroup, it's getting all these assets at a good value. The company is paying only nine times EBITDA after adjusting for the expected $170 million in annual cost savings. For comparison's sake, Kinder Morgan recently sold its Canadian subsidiary and a related pipeline for 13 times EBITDA. The low price Energy Transfer is paying despite the significant premium is a result of the slump in SemGroup's stock over the past few years. The current offer price, for example, is still 28% below where shares traded a year ago and more than 50% below where they were three years ago.

It's all about the flow

While the deal makes financial sense, the main draw is its strategic rationale. America is producing an increasing supply of crude oil thanks to the growing output of shale regions. Most of that output is flowing toward the Gulf Coast since that's the country's key refining hub. However, given the current configuration of the country's refining system, it can't process all this oil. Because of that, it needs to export this excess crude to other markets. That's leading companies to build out additional infrastructure in that region to move oil toward the coast as well as ship more of it to global markets.

SemGroup operates strategically located assets that not only gather oil from wells in key production basins but also export it to global markets. Because of that, it will enhance Energy Transfer's strategy to build an integrated "wellhead-to-water system" that increases the flow of oil toward export facilities along the U.S. Gulf Coast. The company will now control two such terminals that it plans to link with a new pipeline, which should come online by 2021. This integrated system will enhance the company's capabilities, as well as its flexibility to export the increasing flow of oil to that region.

Energy Transfer is one of several companies working on projects that will transport more oil to the coast. It's currently building the Permian Express 4 pipeline, which will ship oil from the Permian Basin to the Gulf Coast. Meanwhile, it's working on increasing the capacity of its Bakken pipeline system, which will transport more oil from North Dakota to the coast. In addition to that, Energy Transfer is looking at a major expansion project at its Nederland Terminal that will enable it to load oil onto supertankers. The company will now complement this expanding footprint with SemGroup's assets, which include its oil pipelines pushing crude toward the coast as well as HFOTCO. That will make Energy Transfer an even bigger player in America's growing oil export market.

Energy Transfer's crude oil segment has helped fuel big-time earnings growth in recent quarters as it brings new pipelines online. That trend should continue in the quarters to come as the company brings more projects online and benefits from its acquisition of SemGroup. Meanwhile, with enhanced capabilities and increasing flexibility, the company will be in an even better position to capture future expansion projects. That makes it an even more compelling oil stock to consider buying these days.