Oil prices have bounced around quite a bit this year. Most recently, crude has been on a downward trend, falling about 6% in August. That sell-off took most energy stocks with it, including many high-yielding pipeline companies.

Because of that, several stand out as compelling buys in September. The three best are Enbridge (NYSE:ENB), Plains All American Pipeline (NASDAQ:PAA), and Energy Transfer (NYSE:ET). 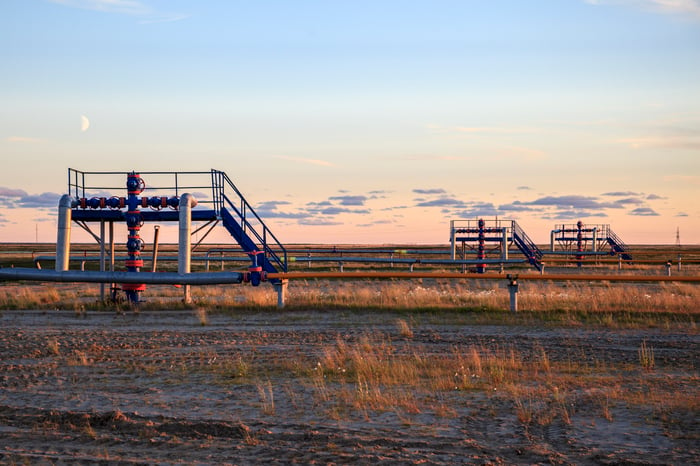 Shares of Canadian oil pipeline giant Enbridge have fallen about 12% from their high point of the year due to the slump in oil prices. That sell-off doesn't make much sense, given that long-term contracts and other predictable sources will supply about 98% of Enbridge's annual cash flow. Because of that, the decline in Enbridge's stock price has made it a more attractive opportunity since it's now cheaper and offers a higher dividend yield at 6.6%.

Adding to Enbridge's appeal is its growth prospects. The company expects to increase its payout by another 10% next year, fueled by the completion of 3 billion Canadian dollars ($2.3 billion) of expansion projects by year-end. It has an additional CA$16 billion ($12 billion) of expansions under construction, which should drive continued dividend growth over the next several years. In the company's view, it can grow its cash flow per share by at least a 5% to 7% annual rate after next year, which should support continued dividend increases.

Units of oil pipeline MLP Plains All American are down about 14% from their high earlier this year. That decline is a real head-scratcher given the company's stronger-than-expected results. Because of its excellent start to the year, it boosted its forecast twice and now expects to grow its cash flow by 14% from 2018's total.

That fast-paced growth should continue in the coming years. That's because Plains All American has secured five high-return oil pipeline expansion opportunities this year, which increase its growth visibility into 2021. Because of that, the company should have no problem boosting its 6.7%-yielding distribution over the next few years. Add that yield and the company's growth prospects to its cheaper valuation, and it's one of the best opportunities for income investors this month.

Lots of income and growth ahead

Energy Transfer has also given up a large share of its gains for the year as a result of crude's summer swoon. Units of the midstream giant are currently about 14% below their high for the year, even though it's on track to produce even better growth for 2019.

Initially, Energy Transfer estimated that it would earn between $10.6 billion and $10.8 billion this year. However, after a record-setting first half, the company boosted its full-year forecast by $200 million, which has it on track to grow earnings by 15% this year.

Meanwhile, the company should be able to continue growing at a healthy rate for the next few years. Not only does it have several billion dollars of expansion projects under construction, but it also has many more in development. That will provide further support to its 9%-yielding distribution, which it can already cover with cash flow by a very comfortable two times.

Income and growth for a cheaper price

Crude prices sold off in August, which weighed on the shares of almost anything oil-related. Because of that, investors can pick up some high-yielding pipeline stocks for lower prices. That sets them up to earn more income in the coming years since this trio now boasts even higher yields to complement their enticing growth prospects.