Earnings lifted one of these stocks. Find out what moved the others.

The stock market managed to bounce back modestly today from the previous session's losses. With attacks on Saudi oil facilities over the weekend, Monday's big surge in energy prices had ramifications across the financial markets. Today, investors took a step back to assess the likely impact of more expensive energy products on the broader global economy. Meanwhile, some companies got a lot of attention after various news items sparked optimism. Apogee Enterprises (APOG -1.22%), Zscaler (ZS -0.92%), and Enphase Energy (ENPH -0.13%) were among the top performers. Here's why they did so well.

Apogee has a solid report

Shares of Apogee Enterprises climbed 11% after the architectural glass and services specialist reported its second-quarter financial results. Sales eased lower by around 1% from year-ago levels, and adjusted earnings per share dropped about 3%. Yet CEO Joseph Puishys celebrated what he called "significant year-over-year improvements" in the key architectural glass segment, and backlogs continued to build in the architectural services business. Apogee also sees a healthy remainder of the fiscal year, and that helped reassure investors who had worried that it might be vulnerable to a downturn in the economy. 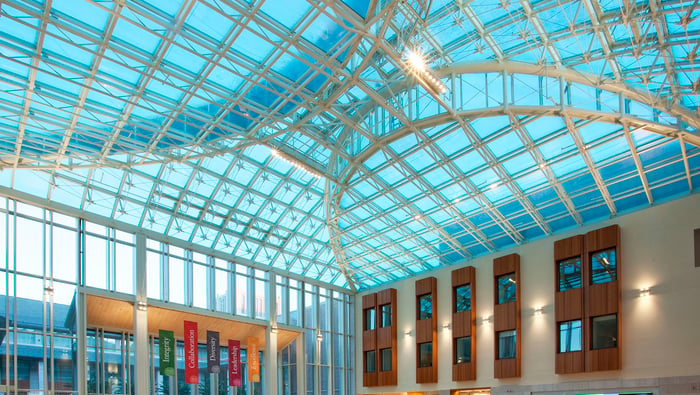 Zscaler saw its stock rise 6%, clawing back some of its recent losses after the cloud security specialist made several announcements. The most notable news was a new partnership with CrowdStrike Holdings under which CrowdStrike's artificial intelligence-powered Threat Graph product will integrate directly with Zscaler's cloud security platform. Zscaler believes that working with CrowdStrike will help it stand out in a highly competitive environment for cybersecurity. The news was also welcome for investors, as Zscaler stock had suffered in recent weeks as the market reevaluated the chances that extremely high growth rates at the company will be able to continue well into the future.

Finally, shares of Enphase Energy gained another 8%. The solar microinverter specialist continued to build positive momentum following a significant rise in the share price on Monday, which stemmed from an upgrade of Enphase stock by prominent Wall Street analysts. Some investors have been nervous that Enphase could face competition from rival providers of solar energy system components, especially one company known for its backup power generation systems. Yet analysts believe that Enphase still has the upper hand in the market, and it'll be hard for a new player to make inroads when existing solar power system installers are familiar with Enphase products. That could bode well for the company's prospects for the foreseeable future.

Why Enphase Energy Stock Was Down Over 2% Today