It already has a foot in the door, and the craft brewer plans to accelerate that growth.

After being left at the altar last month when Anheuser-Busch InBev (BUD -0.83%) opted not to make a qualifying offer to buy it, Craft Brew Alliance (BREW) had to explain how it still planned to grow.

Although it could pursue another company to acquire it, the craft brewer seems to prefer going it alone and accelerating top-line growth by expanding internationally. It already has more than a nascent presence in certain markets, primarily Brazil, and the international business is fast approaching the threshold of 10% of its revenue, the point at which the Securities and Exchange Commission requires a company to break out the data, so more clarity will be coming in the future.  But it believes next year is when investors will really see the international market pay off. 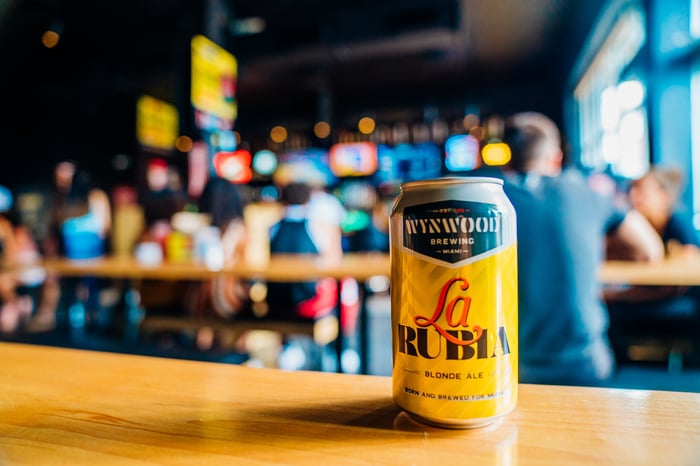 Craft Brew Alliance is looking for La Rubia to be an even bigger brand than Kona. Image source: Wynwood Brewing.

Kona is the big kahuna

The international distribution agreement it has with Anheuser-Busch will remain active for a number of years despite the decision not to buy the company. Craft Brew Alliance told analysts on its second-quarter earnings call that through this agreement, it has been "seeding" Rio de Janeiro with its flagship Kona Brewing brand, and is planning on expanding beyond the city.

Craft Brew produced 719,400 barrels of beer in 2018, almost two-thirds of which was Kona, and as that brand approaches 500,000 barrels a year, it expects 10% of that volume to move into the international market.

The Hawaiian-inspired beer is growing steadily in the range of the high single digits to low double digits, and Kona alone is much larger than brewers that receive higher valuations. For example, Dogfish Head Brewery only added 300,000 barrels of production when Boston Beer (NYSE: SAM) acquired it for $300 million, or about $1,000 per barrel, but the market is currently valuing Craft Brew Alliance at less than $250 per barrel.

By growing the Kona brand in Brazil (and rather than import the beer into the country, it has switched to local production), it should be able to greatly expand its opportunity. The change to a local brewery also means Kona's volumes may dip, but it will save money, and in the long run it will be better for the brand by being closer to the consumer.

An even bigger opportunity

That's not hyperbole. Mexican beer is the one segment of the beer market that is still showing substantial growth, though Constellation Brands' (NYSE: STZ) Corona and Modelo family of beers own that market. Its Modelo Especial gained the most market share of any beer in the U.S. last quarter, enjoying 17% depletion growth (depletions are sales to distributors and retailers, and are typically considered an industry proxy for consumer demand).

Beer drinkers seem to be moving en masse away from beer and toward beverages like hard seltzer (Craft Brew will have three different brands on the market by the fall). But the brewer notes that Hispanic consumers continue to prefer beer over other types of alcohol, which is the reason Mexican imports continue to dominate.

Craft Brew plans to market La Rubia to Caribbean Hispanics as a stand-alone brand; by the fall, it will be available in the key Caribbean Hispanic markets in the U.S. on the east coast. It had a strong launch in Puerto Rico in the second quarter, with volumes up 48%, but that was just the first leg of what will be a much broader international expansion. And there will be other beers that will be introduced, including several from its innovation lab, pH Experiment.

While Craft Brew Alliance was surprised Anheuser-Busch didn't acquire it (and there were a number of very good reasons it should have), being left to its own devices isn't so bad, either. Not least because it still has the resources of AB backing it.

The international markets represent a world of opportunity for Craft Brew, which it indicates it intends to fully exploit. And with brands like Kona and La Rubia leading the way, it could catch a big wave well ahead of its competition.