Please ensure Javascript is enabled for purposes of website accessibility
Log In Help Join The Motley Fool
Free Article Join Over 1 Million Premium Members And Get More In-Depth Stock Guidance and Research
By Rich Duprey - Sep 18, 2019 at 11:38AM

The fast-food chain made yet another investment in artificial intelligence, its third tech acquisition this year.

With McDonald's (MCD -0.99%) acquisition of early-stage artificial intelligence specialist Apprente, the fast-food leader is quickly transforming itself into a technology leader.

The purchase marks the burger joint's third investment in a tech company this year following its acquisition of another artificial intelligence (AI) outfit, Dynamic Yield, and its 10% stake in mobile app developer Plexure.

McDonald's first forays into the tech field were modest: self-ordering kiosks and digital signage. But as it looks to enhance the customer experience and lower overall costs, the chain is accelerating its tech investments. 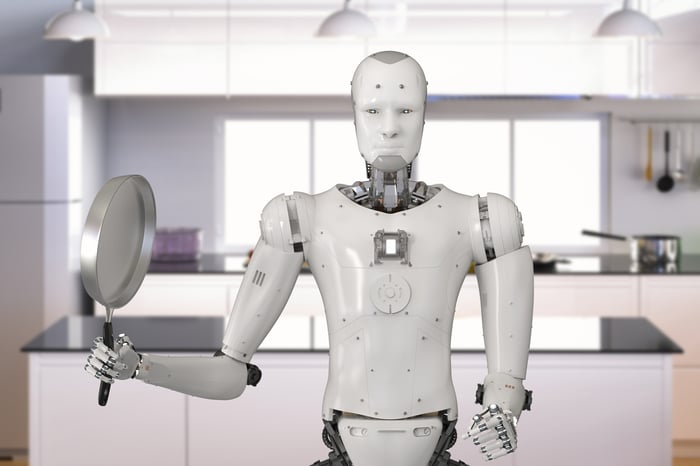 One day, this may be the cook for your McDonald's order. Image source: Getty Images.

The burger stand gets an extreme makeover

Beyond the acquisition of AI firms to help speed up the drive-thru process while also boosting sales through menu suggestions, McDonald's is testing the introduction of robots to dunk fries, chicken nuggets, and fish patties into fryers, and adding mobile pay and pickup to its app. It's likely we haven't seen the last of automation applied to to several layers of its business.

And there's good reason. Employees are limited by the amount of upselling they can do at the point of sale, they're fallible, and they increasingly cost a lot of money.

While the burger chain was rated a more-than-respectable 92.7% in surveys on order accuracy, it was still far behind Chick-fil-A, which was near perfect at 97.2%. But self-ordering kiosks can eliminate almost all mistakes. A dynamic menu on a screen can also offer a near-unlimited number of items for customers to add to their meals. And these kiosks can perform the task over and over again at no cost beyond the initial outlay.

CEO Steve Easterbrook told analysts earlier this year that McDonald's has "created an ecosystem that more and more of our customers are using to order, pay, and receive" their food. Moreover, when people order their own food through a kiosk, they tend to add more items to their order than if an employee took it at a register.

Second-quarter earnings showed global sales were their highest in seven years and comparable-store sales were at a four-year peak. Particularly in the U.S., the check size grew from product mix and higher prices despite a decline in customer traffic.

McDonald's isn't the only restaurant chain to see the benefit of layering technology on top of its analog human component. Wendy's has been adding thousands of self-order kiosks, and Denny's, Domino's, and Dunkin' Brands are testing Alexa-style phone order capabilities.

Retiring Yum! Brands (YUM 0.26%) CEO Greg Creed has said he believes people will be replaced by technology in the restaurant industry within the next few years (there's already a robot greeter at a Pizza Hut in China).

McDonald's Apprente acquisition will further build out its drive-thru technology. It had already deployed AI assistance at thousands of drive-thrus and was planning on implementing the capabilities across all of the restaurant's digital platforms, so the testing was undoubtedly successful enough to warrant further investment.

The acquisition will also see McDonald's create what it is calling McD Tech Labs, a group within McDonald's global technology team that will help increase its presence in Silicon Valley to hire engineers, data scientists, and other advanced technology experts.

Itamar Arel, the founder of Aprente and now the vice president for McD Tech Labs, said: "McDonald's commitment to innovation has long inspired our team. It was quite clear from our various engagements that McDonald's is leading the industry with technology."

So the chain is no longer just a place to buy tasty food at a reasonable price, but also a tech specialist that seeks to spur innovation. It's an advancement that should lead to a future of more and higher sales and profits.