FedEx and Roku took some tough body blows in trading on Wednesday due to very different developments.

Wednesday was not a day to celebrate for investors in FedEx (FDX 2.01%) and Roku (ROKU 5.60%). Both stocks, which are popular and widely held, took big hits today. The former closed the day almost 13% lower, while the latter absorbed a nearly 14% punch.

Let's take a look at why both took such sharp cuts, and whether those nasty blows were justified. 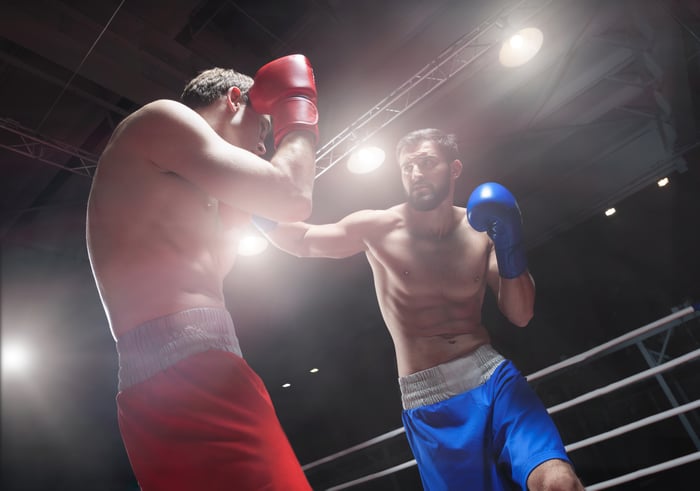 Most companies live in fear of a big rival developing a product that can compete effectively with their top seller. Today's exhibit A: the recently popular tech stock Roku.

The company's boogeyman is cable and content giant Comcast (CMCSA 5.36%), which grandly announced that it would be offering the new Xfinity Flex streaming TV box free of charge to its internet-only subscribers. This closely follows Comcast's unveiling of its streaming service, Peacock.

Peacock won't come onstream until next April, but Xfinity Flex -- much like Roku's own TV top boxes and budget-price "sticks" -- can connect to third-party streaming services. Comcast's product also has certain features similar to that of the higher-end Roku boxes, such as voice remote.

At first blush, this seems pretty scary. Comcast is a sprawling entertainment conglomerate with a market capitalization 15 times that of Roku. It could easily eat its scrappy young rival's lunch, right?

I'm not so sure. Comcast, like other entertainment heavyweights such as Walt Disney, is actually rather late to the streaming party. Roku had been established on the set-top market well before its 2017 IPO, and these days it's also a native operating system in certain TV sets. Citing data from Strategy Analytics, Roku says it had a very chunky 39% of the streaming media player installed base earlier this year.

That's a big head start, and it's a commanding position on the market. Roku has a lot of customers. Being one myself, I'd say the company's hardware and its operating system are easy to use and effective at what they need to do. Personally, I probably wouldn't consider switching to a rival system unless its features were so rich and compelling I couldn't refuse. A voice remote feature isn't enough to sway me.

I think Roku's sell-off is a fearful, instinctive reaction to the moves of a 300-pound rival. That threat isn't as scary as it seems. Meanwhile, Roku is doing well as a company and has plenty of growth in front of it. Investors should consider snapping up some shares while the price is depressed.

On Wednesday, FedEx was suffering from a nasty quarterly results hangover. The company unveiled its Q1 of fiscal 2020 figures the night before, and they weren't inspiring.

For the quarter, the logistics king booked $17.05 billion in revenue, essentially flat on a year-over-year basis. Non-GAAP (adjusted) net profit was $800 million, or $3.05 per share. This was below the $933 million ($3.46) of Q1 2019. The respective stagnation and decline were bad enough. Compounding this unhappy dynamic, those numbers came in under the average analyst estimates.

On top of that, FedEx's profit guidance for the entirety of this fiscal year was lowered, and ended up short of expectations. The company now believes it will post adjusted per-share earnings of $11 to $13 per share, exclusive of adjustments for a retirement plan (which have yet to be calculated). Prognosticators were modeling $14.70.

The company blamed its struggles on and pegged the reduced guidance partially to "a weakening global macro environment driven by increasing trade tensions and policy uncertainty." Which, it has to be said, feels like the excuse-du-jour for a lot of stumbling global conglomerates these days. Another cited factor in the guidance chop was the loss of an unnamed large client, almost certainly Amazon.com.

Meanwhile, the company is burdened by a large debt load thanks in no small part to the massive and not overly helpful acquisition of TNT Express in 2016. And it's the now former client Amazon.com that's reshaping the logistics industry with its almost-as-fast-as-you-order-it shipping; FedEx seems to be sitting on the sidelines, grumbling about the world economy.

FedEx feels like a tired and uninspired company to me. This hangover might just last, so I wouldn't be eager to buy the company's stock even at the current discount.