Please ensure Javascript is enabled for purposes of website accessibility
Log In Help Join The Motley Fool
Free Article Join Over 1 Million Premium Members And Get More In-Depth Stock Guidance and Research
By Daniel B. Kline – Sep 18, 2019 at 2:19PM

The company's Pizza Hut and KFC brands have done well with food stunts.

You can either blame or credit Taco Bell for launching novelty limited-time offers that push expectations or mash two unexpected foods together. The Yum! Brands' (YUM 2.75%) chain kicked off the current craze with its Doritos Locos Taco back in 2012.

That hybrid of the popular snack chip and a taco shell sold so well that it became a permanent menu item and spun off a number of related products. The Doritos Locos Taco was not the first crazy menu mash-up to be sold by a fast-food chain, but it's sort of the godfather of the current trend of chains pulling out all the stops to get attention.

It's a trick that Yum! Brands has used well not just with Taco Bell but also with its KFC and Pizza Hut restaurants. Now those two brands have done it again, with the pizza eatery offering Stuffed Cheez-It Pizza, partnered with the popular Kellogg's snack cracker, and KFC testing a chicken sandwich served on two doughnuts. 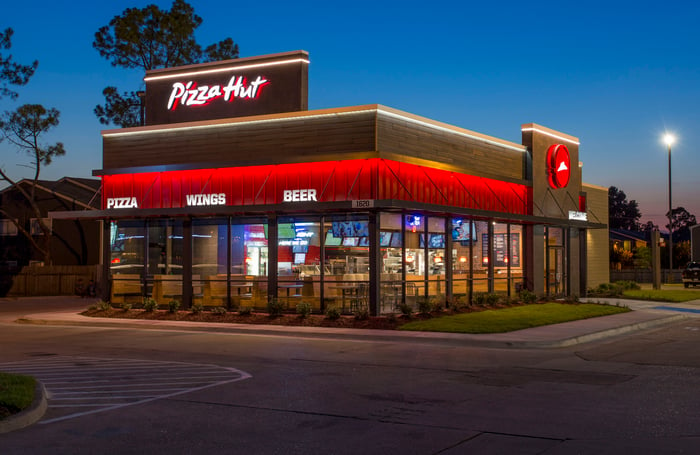 What are Pizza Hut and KFC doing?

The Pizza Hut offering isn't exactly a pizza. It's sort of a Hot Pocket or a squarish calzone with a Cheez-It-flavored crust. The new item is being offered nationwide, and an order includes "four baked jumbo squares topped with that distinctly sharp, real-cheese taste you know and love from Cheez-It baked to toasty perfection," the company said in a press release. Cheese and pepperoni versions are offered. Both are served with a side of marinara sauce.

"We pride ourselves on being the go-to for unexpected pizza innovations, and I can't think of a more badass partner than Cheez-It to bring our next original menu item to life," said Pizza Hut Chief Brand Officer Marianne Radley.

The KFC doughnut sandwich has had a more laid-back launch. No official comment has been made on the sandwich -- which is a piece of fried chicken served between two glazed doughnuts -- but it has popped up in select stores in the Pittsburgh area as well as the Virginia towns of Richmond, Norfolk, and Virginia Beach.

Why is Yum! doing this?

This type of product stunt gets attention. No matter how wacky (or bad) an idea may appear, consumers seem to want to try it. And when an idea involves two things people already like, there appears to be a general desire to see how the combined item will taste.

Neither of these products is all that ridiculous. Cheese and pizza do go together, and chicken and waffles is not that different from pairing chicken with doughnuts.

Of course, if these stunts work, you can expect the boundaries to be pushed even further. That may lead to something a weird as one-time Homer Simpson snack "Nuts and Gum," which used the tagline "together at last." And it will almost certainly result in more snack chip mash-ups and sweet-and-savory pairings.

These are attention-getting stunts for sure, but they generally bring in customers. They also sometimes lead to recurring menu items that can draw traffic when restaurants bring them back.