Confidence is often an indicator of success, and one fast-casual brand is emanating poise in a highly competitive market -- YUM! Brands' Taco Bell (NYSE:YUM).

Taco Bell recently  made news recently by boldly rejecting a partnership with both of the trending faux meat pioneers Beyond Meat (NASDAQ:BYND) and Impossible Foods. Meanwhile, Burger King, Subway, and Tim Hortons are hoping for a lucrative future with a meatless cash cow. 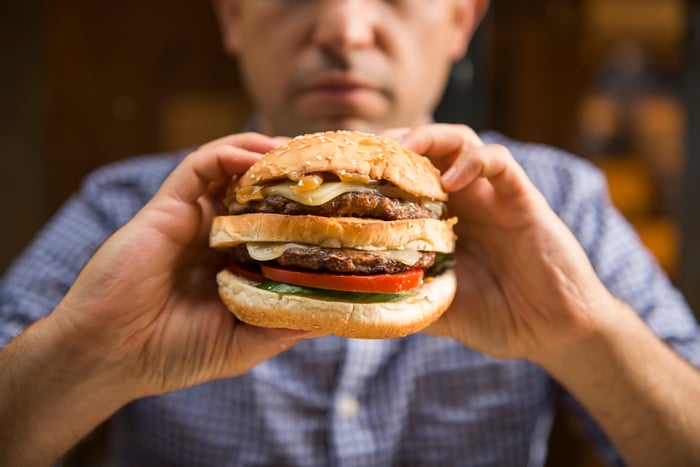 To meat, or not to meat, that is the question

The problem with participating in the meatless frenzy is that news is beginning to seep out that faux meat may be no more healthy than its beefy cousin. That's why Taco Bell seems to have made a wise and courageous decision.

Instead, Taco Bell is touting an in-house registered dietitian who focuses on making sure that its ingredients are free of additives, preservatives, artificial flavors and colors, high-fructose corn syrup, partially hydrogenated oil, and excess sodium. This seems a much better way to go when consumers are increasingly more discerning when it comes to nutritious choices at fast-casual eateries.

Taco Bell has new leadership in the form of Mark King who, as of July 31, assumed the role of division chief executive officer. King was previously the president of Adidas Group North America. His track record precedes him, and we will see if he can prove his management prowess in the fast casual industry as effectively as he has in the sport apparel industry.

And there's more on the leadership side of things. YUM! Brands just announced that it will have a new CEO starting January 1, 2020. As part of the firm's succession planning, David Gibbs will assume the role of CEO of YUM!

Other moves by the YUM! brand are that Taco Bell, KFC, and Pizza Hut are rapidly developing online ordering for pick-up and delivery via Grubhub. YUM! Brands acquired Grubhub for $200 million in in 2018. Also, YUM! Brands is focusing on digital technology -- Taco Bell is introducing digital kiosks and plans to have them in 6,500 locations by next year.

Judging by recent performance, Taco Bell seems to be on a roll, and the financials seem to indicate potential market success where competitors are failing.

YUM! Brands' latest earnings report for second-quarter 2019 looked rosy and exceeded analyst expectations. Shares increased by over 6%. Adjusted earnings per share were $0.93 cents compared to the expected $0.87 cents, revenues were $1.31 billion compared to the expected $1.28 billion, and same-store sales were up 5% versus 3.01% expected. Net sales fell 4% to $1.31 billion, which was better than expectations.

Second-quarter net income fell to $289 million, or 94 cents a share, down from $321 million, or $0.99 cents per share a year ago. Sales for YUM! stores that were open for more than a year beat expectations.

It's no surprise that Pizza Hut is the weaker of the three siblings, but perhaps YUM! will consider divesting of its pizza franchises. As of now, the company has stated that it will restructure Pizza Hut's franchisees and close 400 stores to transition the brand from dine-in restaurants to delivery and carry-out stores. Or, as many analysts would prefer, it could just keep them closed.

Another good sign is that YUM! is reinvesting. The company repurchased 1.9 million shares totaling $196 million at an average price per share of $104. This is an indication that the company thinks it is undervalued in the market and only looking at increasing its market cap. The company announced in August a quarterly dividend of $0.42 per share, which has been consistent over the last year. Quarterly dividends in 2018 were $0.36 and, again, consistent.

Overall, YUM! Brands is managing to meet its shareholder obligations while sensibly investing. The company has new leadership and is making risky but bold decisions that seem to be spot on. Despite its spending, the company is still maintaining an operating margin of 18.5%, which is better than Restaurant Brands, parent of Burger King, at 10.6%. McDonald's has an operating margin of 29%.

With such marketplace confidence amid today's turbulent times, YUM! Brands is a good option for investors. This is particularly the case if YUM! parlays its focus on healthier food and trendier spaces into KFC and divests of its Pizza Hut assets.

Understood – I've edited this, thanks!

I agree. I've changed the headline and edited this sentence.