Please ensure Javascript is enabled for purposes of website accessibility
Log In Help Join The Motley Fool
Free Article Join Over 1 Million Premium Members And Get More In-Depth Stock Guidance and Research
By Timothy Green – Sep 19, 2019 at 10:06AM

FedEx is struggling, and Chewy fell short of investor expectations.

The market was slightly up Wednesday after of an interest rate cut of .25% from the Federal Reserve.

Trade war and recession fears were thrust to the forefront on Wednesday after FedEx (FDX 2.70%) slashed its earnings guidance, and investors became a little less optimistic about online retailer Chewy (CHWY 2.96%) after a mixed report.

Shares of FedEx were down 13.6% following a mixed report and a guidance cut from the delivery company. FedEx is feeling pressure from a weakening macro-economic environment, trade tensions, uncertainty, and the loss of business from Amazon in the FedEx Ground segment.

FedEx's fiscal first-quarter revenue was essentially flat at $17.05 billion, exactly what analysts were expecting. But the bottom line came up short – FedEx's $3.05 in adjusted earnings per share was down nearly 12% year over year, and it was $0.11 shy of the average analyst estimate. 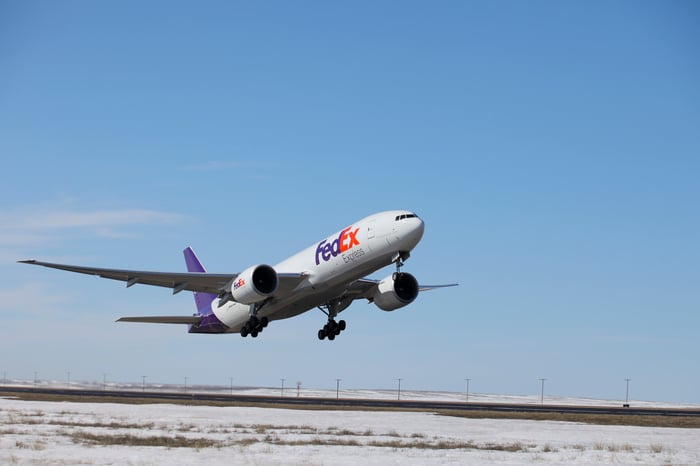 While FedEx's results weren't great, the company's guidance was where things got ugly. Revenue in fiscal 2020 will be weaker than expected, thanks to economic deterioration and increased trade tensions. This lower revenue outlook led FedEx to slash its adjusted EPS guidance to a range of $11 to $13. Previously, the company had expected a low single-digit increase from fiscal 2019's adjusted EPS of $13.25. These numbers exclude retirement plan adjustments and TNT Express integration costs.

This new forecast assumes moderate U.S. economic growth, so the situation could deteriorate further if the U.S. economy falls into a recession in the near future.

FedEx stock is now trading right around its 52-week low, but the stock could tumble further if the company's results continue to get worse.

Growth not enough for Chewy

Fast-growing and very unprofitable online pet retailer Chewy failed to win over investors on Wednesday, delivering a mixed report that sent shares down 6.15%.

Chewy grew revenue by 43% year over year to $1.15 billion, which was $20 million higher than analysts were expecting. The company now has 12 million active customers, up 39% from last year, and revenue from customers using its Autoship subscription program reached 69.3% of the total.

That Autoship metric is a little deceiving – it includes all revenue from customers who have used Autoship at least once in the past year. And because Autoship can be cancelled after one order with no consequences, while still scoring the customer an Autoship discount, it's a dubious proxy for subscription revenue.

Chewy's strong revenue growth wasn't enough to persuade investors to push up the stock. The company reported a net loss of $82.9 million, or $0.21 per share, worse than the prior-year period and $0.10 per share below analyst expectations. Gross margin improved, but operating costs soared.

Online retail is competitive, a fact that will likely keep a lid on Chewy's margins and require extensive marketing spending. The company poured $110.8 million into advertising and marketing in the second quarter, representing nearly 10% of revenue. When Chewy finally turns a profit, investors may be underwhelmed.

John Mackey, CEO of Whole Foods Market, an Amazon subsidiary, is a member of The Motley Fool's board of directors. Timothy Green has no position in any of the stocks mentioned. The Motley Fool owns shares of and recommends Amazon and FedEx. The Motley Fool has a disclosure policy.