As we begin to contemplate year-end 2019, professional-environments manufacturer and design-house Herman Miller ( MLHR 2.01% ) is one of my candidates for small-cap sleeper stock of the year. The Zeeland, Michigan-based enterprise has quietly strung together several quarters of appealing growth, and shares have ascended accordingly, rising 50% year to date.

Of course, that number doesn't include today's 5% leap in early trading, following the company's release of first-quarter fiscal 2020 results after markets concluded business Wednesday evening. Below, we'll review headline numbers and isolate the drivers of this latest quarter of outperformance.

Note that all comparative numbers that follow are presented against the prior-year quarter. 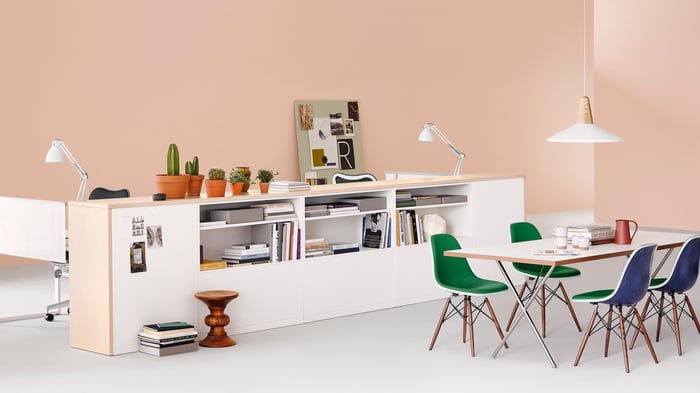 CEO Andi Owen completed her first year at the helm of the 114 year-old manufacturer in late August. In the company's earnings press release, Owen commented on the quarter, and also alluded to her focus on extending the Herman Miller brand globally and increasing its retail presence, among other priorities:

Strong sales and order growth for the quarter were led by our North America and Retail businesses. Consolidated sales growth, higher gross margins and well-managed operating expenses combined to drive operating margin expansion over the same quarter last year. While there are clear opportunities for additional improvement, the enterprise at large is executing at a very high level, and we are beginning to realize meaningful benefit from our efforts to align the direction of the global business around a common set of strategic priorities.

Looking ahead to next quarter, Herman Miller advised shareholders to expect revenue of between $685 million and $705 million, which should approximate organic sales growth of 7% at the midpoint of the range. As for earnings, the manufacturer projects that it will ink between $0.85 and $0.89 in diluted EPS in the next reporting period. At the midpoint of this range, the earnings target will represent robust growth of 32% against the $0.66 per share reported in the second quarter of fiscal 2019.