Please ensure Javascript is enabled for purposes of website accessibility
Log In Help Join The Motley Fool
Free Article Join Over 1 Million Premium Members And Get More In-Depth Stock Guidance and Research
By Daniel B. Kline – Sep 20, 2019 at 2:30PM

The long-promised technology finally has a real-world application.

Unmanned flying vehicles, better known as drones, have been a technology on the cusp of being used for retail delivery for a number of years. Amazon has tested them, and Chipotle used them to deliver burritos in an act that was more publicity stunt than practical. But now Walgreens (WBA 3.28%) will finally make them a reality, at least on a limited basis.

The pharmacy chain has partnered with Alphabet's (GOOG 3.28%) (GOOGL 3.13%) Wing to offer what it calls "store to door" delivery of "health and wellness, food and beverage and convenience items -- via state-of-the-art drone technology -- in minutes," according to a press release.

It's a very limited rollout available only in Christiansburg, Virginia starting in October, but it's a milestone that may mark the beginning of the technology moving from science fiction to reality. Drones aren't going to fill the skies of New York, Los Angeles, or Boston just yet, but this may be a precursor to that. 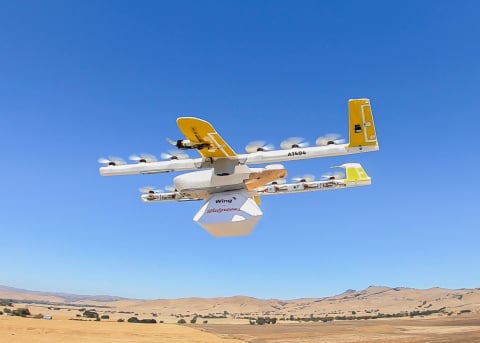 Walgreens will offer a limited assortment of products for delivery via drone. Image source: Walgreens.

How will it work?

Wing is the first drone operator which has been approved for delivery by the Federal Aviation Administration (FAA). The effort in Christianburg is considered a pilot program to help understand how drones might be rolled out in more cities.

Walgreens customers will be able to select from more than 100 products or six pre-selected "packs" for delivery. The packs are allergy, baby, cough/cold, first aid, pain, and kids' snacks. The drones cannot deliver prescriptions. Orders are placed via the Wing app for drone delivery.

"Walgreens continues to explore partnerships to transform and modernize our customer experience and we are proud to be the first retailer in the U.S. to offer an on-demand commercial drone delivery option with Wing," said Walgreens Chief Innovation Officer Vish Sankaran in a press release. "This is the kind of omnichannel partnership and offering that can redefine convenience for our customers and communities -- delivering items to homes in minutes, not hours or days."

The location for the test was picked because Christianburg is close to Virginia Tech, where Wing has been testing its drones since 2016. Walgreens noted that 78% of the U.S. population lives within five miles of one of its stores, making it an ideal candidate for eventually bringing drones nationwide.

Drones seem inevitable, but how widespread they become and how quickly that happens depends a lot on this test. Walgreens and Wing have to show that their flying vehicles are safe and unobtrusive. Nobody wants to be hit by a drone, or to have noisy vehicles landing in their neighborhood. The standard for this test will be high because it's so high-profile. A crashed drone or injured person will receive national media attention, and delay more widespread use of this technology.

Starting in a small town near the college where this has been tested for over two years makes sense. If Walgreen and Wing can prove that this tech is viable, safe, and generally not a bother, then the sky may literally be the limit for other companies making use of drones for delivery.

Should You Buy the Dow Jones' 4 Worst-Performing 2022 Stocks?

Nasdaq Today: Tesla Gets a Downgrade; Walgreens CEO Steps Down