Will innovation suffer as a result?

Telecom and media conglomerate Comcast (CMCSA 1.18%) made waves last week when it announced that it would be giving free media streaming players to internet-only customers in an aggressive effort to court cord-cutters. Historically, cable operators would only provide set-top boxes to video customers that have higher monthly bills. The new offer will help Comcast build its competing over-the-top (OTT) video platform, which tanked Roku (ROKU 2.85%) shares after investors fretted about intensifying competition.

The situation also happens to be exactly what Steve Jobs feared. 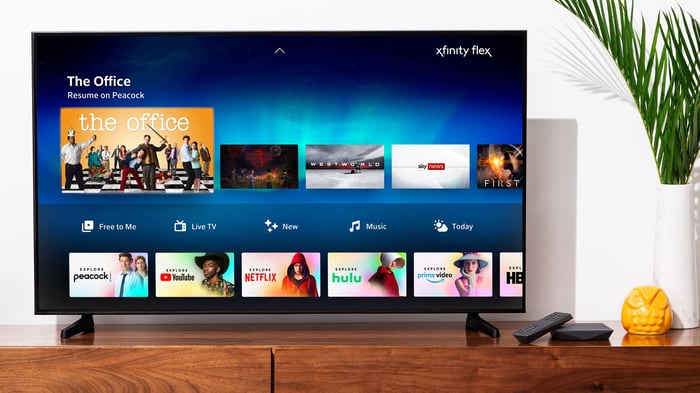 Once upon a time, Apple (AAPL 2.45%) dreamed of making a television set, a notion that has been a source of endless investor speculation. The Cupertino tech giant eventually came to the conclusion that making an Apple TV set was more trouble than it's worth, instead deciding to make an Apple TV set-top box and now a video-streaming service (Apple TV+) that launches in November.

In what now seems like ancient history, Jobs was answering questions at the D8 Conference back in 2010. The Apple co-founder described one of the biggest challenges in expanding into the living room:

Ask TiVo, ask ReplayTV, ask Roku, ask Vudu, ask us, ask Google in a few months [crowd laughs]. So all you can do ... Sony's tried as well, Panasonic's tried, a lot of people have tried -- they've all failed. So all you can do is add a box onto the TV system.

At the time, the Alphabet subsidiary had just announced Google TV, a smart TV platform that was discontinued in 2014 and replaced with Android TV. The inevitable result, Jobs posited, was "a table full of remotes, a cluster full of boxes, a bunch of different UIs."

"The only way that's ever gonna change is if you can really go back to square one and tear up the set-top box and redesign it from scratch with a consistent UI across all these different functions and get it to the consumer in a way that they're willing to pay for it," Jobs said.

It's been nearly a decade since Jobs made those observations, and a lot has naturally changed in the years since. Cord-cutting has accelerated as OTT video services proliferated, which opened up opportunities for companies to develop streaming boxes. Apple TV has evolved significantly as a platform, providing that "consistent UI," and consumers are very much willing to pay for set-top boxes these days; Apple has sold tens of millions of Apple TVs.

The real question that the industry will face going forward: Will innovation suffer?