Please ensure Javascript is enabled for purposes of website accessibility
Log In Help Join The Motley Fool
Free Article Join Over 1 Million Premium Members And Get More In-Depth Stock Guidance and Research
By Maxx Chatsko - Sep 22, 2019 at 10:00AM

Management has expanded selling, general, and administrative expenses in lockstep with gross profit increases. The aggressive strategy has a cost.

After happily bidding up the stock price to an impressive premium valuation, investors have been more cautious with cardiac device developer iRhythm Technologies (IRTC -0.92%) in the last year. There's not too much to complain about with the growth stock. The company's shares have soared roughly 200% in the last three years. In the second quarter of 2019, revenue grew 50% from the year-ago period. The business even recently inked a partnership with Alphabet's Verily subsidiary to track "silent" irregular heartbeats that can have potentially fatal health consequences.

Despite the progress and sales growth, investors have apparently decided to let the business earn its premium valuation rather than continuing to push it higher. Shares of iRhythm Technologies have lost 15% in the last year. But the company is still valued at $2 billion, and the stock trades at 11 times sales and 40 times book value.

One likely point of contention is that iRhythm Technologies hasn't benefited much from its first-half 2019 gross margin of 75.5%. The business has increased operating expenses in lockstep with gross profits, resulting in almost no progress erasing operating losses. Can management prioritize both growth and profits to please investors? 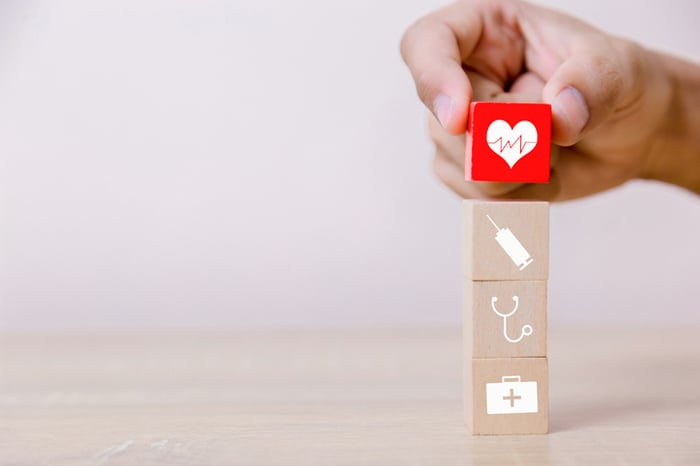 Is "growth at all costs" worth the cost?

iRhythm Technologies clearly sees an opportunity to capture a larger share of the market for initial diagnosis in individuals expressing cardiac symptoms, such as an irregular heartbeat or arrhythmia. The company's wearable devices, the Zio XT and Zio AT, have been adopted quickly thanks to offering a streamlined experience for users and clinicians, and more accurate and actionable data than competing devices. They can theoretically take the entire market share of Holter monitors (62% of the market), event monitors (28% of the market), and mobile cardiac telemetry (10% of the market).

The business has invested heavily in sales and marketing to open new accounts with doctor offices and then win the hearts and minds of doctors. It appears to be working. In an illustration provided by the company, accounts adopted the Zio XT in 10% of diagnostic situations at the end of 2016, but those same accounts leaned on the Zio XT for 40% of cases by the end of 2017 and for 70% of implementations by the end of 2018. The accounts also leaned on the recently launched Zio AT, which competes with mobile cardiac telemetry devices, for 14% of diagnostic cases at the end of last year. That gave iRhythm Technologies an 84% rate of penetration across both devices (in the provided illustration, anyway).

That success appears to be reflected in second-quarter and first-half 2019 operating results, which demonstrate that the business is having no trouble growing its top line. However, the income statement covering those two periods also shows that revenue growth is coming at a significant cost.

Investors can see that nearly all of the improvement in gross profit was eaten up by increases in operating expenses. While gross margin expanded to 75.6% in the first half of this year, there are diminishing returns available from focusing on further gross margin expansion. Therefore, iRhythm Technologies will need to slow the increase in selling, general, and administrative expenses to allow more gross profit to trickle down the income statement and enable profitable operations.

Relief may be on the way. The company expects to end 2019 with as many as 140 sales representatives, up from 110 at the end of last year and just 86 at the end of 2017, but it says most were on board by the end of June. That's a promising development considering that there are also likely to be diminishing returns from an ever-expanding sales force.

For instance, iRhythm Technologies tells investors that the total addressable market for wearable devices in cardiac detection, diagnosis, and management is more than $2 billion. But the company serves only one part of the overall market (initial diagnosis in symptomatic individuals) today and hasn't published the estimated size of the opportunity. Growth is still humming along, but at some point, it'll begin to slow. The company and its shareholders would surely benefit from having comfortably profitable operations when that occurs, especially as the business pours money into developing new products and services aimed at more parts of the overall market. After all, there's not much point to dislodging Holter monitors and event monitors if the opportunity can't be seized profitably.

Investors are making the business earn it

The cardiac device developer expects full-year 2019 revenue of about $214 million. While that would be year-over-year growth of 45% and mark the largest ever dollar increase from one year to the next, investors don't seem quite as enamored with the company's growth as they have in the past.

Part of the reason is that iRhythm Technologies shot up to an unbelievable premium in 2017 and 2018, so it makes sense that investors want the business to start earning its lofty valuation. But it's also a little disappointing that there haven't been greater improvements in operating income despite the epic growth.

Ideally, management will find a way to balance growth and profitable operations. That would allow the company to self-fund an expanding list of research and development projects in wearable products and software services aimed at the largest parts of the market (detection in the general population and detection in high-risk asymptomatic individuals) who aren't currently served by the Zio XT or Zio AT. Investors will learn more when the company reports third-quarter 2019 operating results in the coming months.