Corporate spinoffs can create great investment opportunities. That could be the case for Gap stock after the retail conglomerate spins off its Old Navy brand.

Shares of Gap (GPS 4.14%) have lost more than half of their value over the past five years, as the growth of the Old Navy and Athleta brands has not been enough to offset the steady decline of the company's namesake brand and, to a lesser extent, the upscale Banana Republic brand.

Earlier this year, Gap announced that it would try to boost shareholder value by spinning off Old Navy, its largest and most successful brand, as a separate public company in 2020. A recent investor presentation revealed that Old Navy has generated nearly all of Gap's profit recently. Between its high margins and substantial growth prospects, Old Navy as a standalone company could be worth as much or more than all of Gap today. But counterintuitively, the remaining Gap business could actually be a better investment opportunity following the spinoff.

Old Navy accounts for the vast majority of Gap's value

Last year, Old Navy generated nearly $8 billion of revenue, about 47% of the company total. However, Old Navy has been far more profitable than Gap's other brands recently. Last year, it posted an operating margin of 15%, compared to just 2% for the rest of Gap (down from 4% two years earlier). 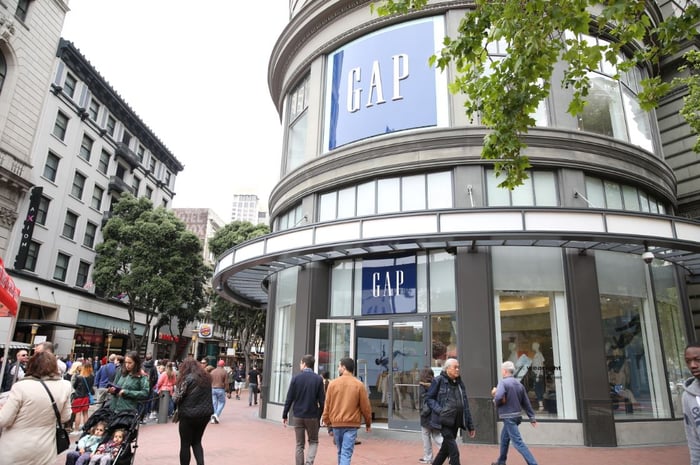 The Gap brand has been struggling for years. Image source: Gap.

These factors -- dramatically higher earnings, higher margins, and faster growth -- suggest that investors will assign the vast majority of Gap's current market value to the Old Navy spinoff. That could create a buying opportunity for Gap stock.

In his popular book You Can Be a Stock Market Genius, hedge-fund manager Joel Greenblatt explains at length why corporate spinoffs can be great for investors. Crucially, by creating more narrowly focused companies, spinoffs make it easier to reward management for better performance -- which in turn boosts shareholder value.

Gap stock currently has a market cap of about $6.6 billion. While Old Navy has experienced a dip in its sales and margin performance year-to-date -- and the exact terms of the spinoff have not been finalized yet -- investors are likely to assign 80% or more of Gap stock's market value to the Old Navy business. That means the remaining Gap business could have an equity value in the vicinity of $1 billion.

Gap is already one of the smallest S&P 500 components. While there is a chance that Old Navy could remain in the widely followed index, the future Gap would start out as a small-cap stock and certainly wouldn't qualify. As a result, investors can expect lots of forced selling by index funds and other institutional investors in the early going, driving the price down.

Moreover, Gap is also a great example of a company that could benefit from better management incentives following the Old Navy spinoff. In recent years, Old Navy's strength has hidden the extent of the profitability problems for the rest of the business. (Management hasn't previously reported margins by business unit.) With one part of the company performing well, there was less urgency to fix the rest.

Management is already aggressively tackling one of the company's biggest issues: low margin and sales productivity in many of Gap's stores. It is in the midst of cutting the global Gap specialty (i.e., non-outlet) store fleet by 40% from early 2018 levels. Doing so will improve the Gap brand's profitability and shift the company's sales mix to higher-margin, higher-growth brands.

Of course, it's possible that Gap's turnaround plan will fail in the tough competitive environment. However, the Gap and Banana Republic brands both have large, solidly profitable online and outlet store businesses, and the Athleta, Hill City, and Janie and Jack brands offer ample growth potential. As a result, Gap stock could be a steal after the Old Navy spinoff -- if the price is right.