When Tesla (NASDAQ:TSLA) introduced the Powerwall in 2015, it was the start of a race toward energy storage becoming a standard offering with residential solar. At the time, the Powerwall was meant to be a backup system for homeowners, but the promise was that eventually, it would offer the opportunity to take a home almost entirely off the grid.

There have been fits and starts for Tesla's Powerwall business, and to date, it hasn't really moved the needle for Tesla in comparison to electric vehicles. And today companies like Sunrun (NASDAQ: RUN), Sonnen, and SunPower (NASDAQ:SPWR) are offering their own energy storage solutions. SunPower's recently announced Equinox Storage, which pairs with its Equinox solar product, may be the most complete offering yet. 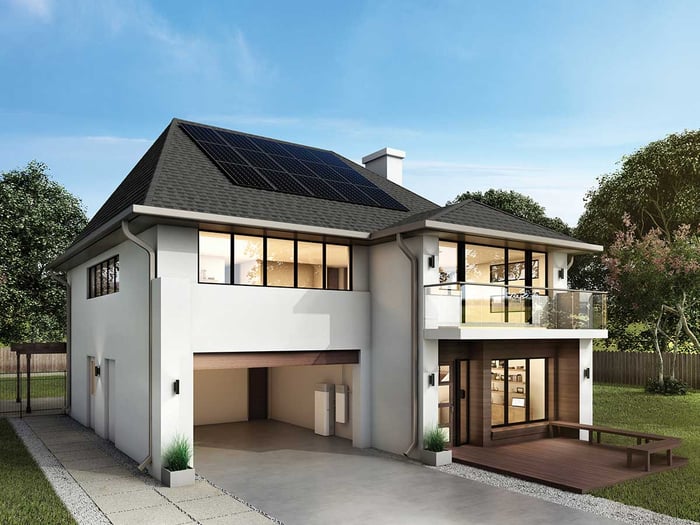 How SunPower is bringing storage into the home

SunPower is pairing an energy storage system that can be up to 12 kilowatt-hours (kWh) with an inverter and hub that will control a home's energy consumption. The system can charge when solar energy production is at its peak, discharge into the home when utility rates are high, and provide backup in an emergency.

The two systems currently being offered are 4.2 kW/6.5 kWh and 6.8kW/13 kWh, both of which come in a box that's 62 inches tall, 21 inches wide, and 13.5 inches deep. That's significantly larger than the 5.75-inch-thick Powerwall and smaller than the largest Powerwall's 13.5 kWh of capacity. But SunPower is betting that the full package is what homeowners will value.

Norm Taffe, SunPower's executive vice president of residential solar, said, "Equinox Storage also automatically manages energy supply based on solar production, home electricity consumption, and utility rates to make the most efficient use of stored power every day." In that sense, it's a seamless addition for consumers and can save them money from Day One.

When packaged with SunPower solar, the Equinox Storage product offers a single point of contact and warranty for solar and energy storage. And the storage system will likely be the hub for SunPower's vision of offering energy as a service to customers.

Homeowners have fewer ways to justify energy storage, but the mechanisms are improving. California is transitioning to time of use rates that charge customers more for using electricity during peak times of the day, like at the heat of the day or when people get home from work. This can provide an opportunity for arbitrage of energy prices for homeowners with energy storage. Some states also have demand charges, which can be reduced by energy storage.

SunPower is starting its energy storage rollout in California, which is the biggest solar market in the country. But I wouldn't expect a high attachment rate of energy storage unless the cost of the system is very compelling for homeowners.

Long term, I think energy storage will be a big part of our energy infrastructure, and homeowners with batteries in the garage will play a big role. But companies like SunPower have to prove the systems will work both technically and financially before adoption will reach a wider audience. Slowly but surely, companies are proving the business model and a one-stop shop offering may be what the industry needs to increase adoption to another level over the next few years.

Can Energy Storage Be a Staple for Residential Solar? @themotleyfool #stocks $SPWR $TSLA Next Article
Current