An electric-car maker and an alt-foods specialist both got whacked by investors on Monday.

It says something about the great depth and width of our stock exchanges that even on an up day for the markets, a great many stocks fall in price (and vice versa, of course).

Monday was a fine day for the bulls, but as always, the bears did some pouncing. Here's a look at two notable stocks that got clawed by investors, and whether they deserved that treatment. 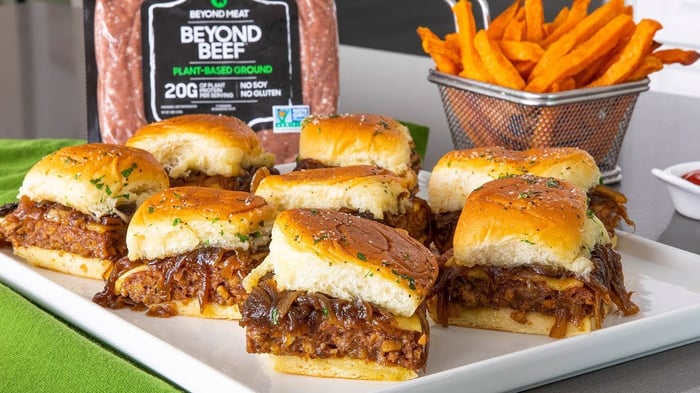 Beyond Meat: Where's the beef?

Recently popular consumer goods stock Beyond Meat (BYND -4.97%) is certainly not beyond criticism. A downbeat analyst note released today drove the stock down by almost 5%.

"Downbeat" might be a little bit of an understatement. Analyst Mikheil Omanadze at Exane BNP Paribas initiated coverage on Beyond Meat shares with an underperform (i.e., sell) rating and a price target of $70. That's rather uncomfortable given that the stock closed last week at slightly over $155.

Omanadze's evaluation of the stock contained a core truth facing the company: "While plant-based meats will grow rapidly, we believe that barriers to entry are negligible; we thus struggle to justify BYND's valuation," he wrote.

That's not to say that any of us could throw a few vegetables and other substances into our bathtubs and create a meat-like offering. But competing products devised by food professionals already exist and have pushed into the market -- witness Impossible Foods, whose Impossible Burger is not only on the menu of, but also prominently advertised by, Restaurant Brands International's sprawling Burger King.

Also, the early and successful adaptation of alt-meat products is attracting rival cooks to the kitchen. The Paribas analysis points out that big food players such as Tyson Foods and Hormel are in various stages of developing such offerings of their own. Beyond Meat is a little guy that will find it tough to fight rapidly increasing competition from the big guys.

I think it's admirable that Beyond Meat has managed to develop a line of products that have received generally positive reviews from consumers. I also like that it has done a fine job getting these goods onto grocery store shelves and onto the tables of popular restaurant chains. But even after this latest stock price hit, the company still looks too richly valued, and as such I'd hold off on the shares.

NIO (NIO 1.42%) got a hard slap from the market on Moday, with its American Depositary Receipts (ADRs) closing almost 11% lower on the day. Not coincidentally, the Chinese electric-vehicle (EV) maker is due to report Q2 figures on Tuesday.

Investors are obviously bracing for the worst. Analysts have projected a $0.18-per-ADR loss. Although this is a big improvement over the Q2 2018 shortfall of $0.91 per ADR, if realized it'll extend the company's streak of bottom-line losses.

NIO has been in the investor doghouse for months now, ever since the Chinese government reduced its subsidy for EVs in March. Since NIO is basically a one-trick pony of an EV maker, the stock took a nasty hit on the news.

Like many Chinese companies, NIO has ambitions to sell abroad, particularly to the vast car-hungry U.S. market. But U.S.-China trade tensions are putting a real damper on that dream. And EV king Tesla (TSLA 1.43%) is about to push into the Chinese market. Tesla's appealing, high-end vehicles should be a hit with status-conscious local consumers and steal some of NIO's thunder.

On the bright side, sales of EVs are projected to grow robustly over the next few years and decades -- how could they not, given concerns about the environment and persistently high gas prices? Still, I think NIO -- not unlike Tesla -- has some daunting challenges ahead of it and hasn't yet proven it can surmount them. I'd keep away from the stock for now.

Should Nio Shareholders Be Worried?

5 Growth Stocks That Can Build Generational Wealth by 2040