Exact Sciences and GW Pharmaceuticals received regulatory approvals that will allow the companies to expand sales of successful products.

Major benchmarks moved mostly sideways Monday, as weak economic data from Germany failed to discourage U.S. investors. The Dow Jones Industrial Average ( ^DJI -0.17% ) and the S&P 500 ( ^GSPC -0.84% ) started out in the red but recovered during the session to close nearly flat. The consumer staples sector led the market, with healthcare stocks falling behind. 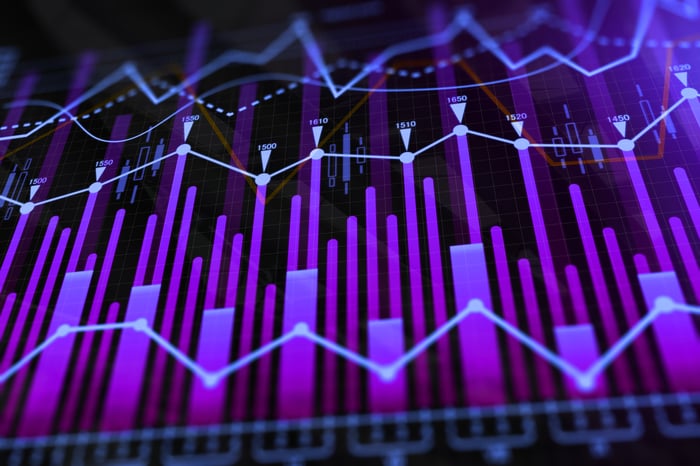 Cancer diagnostic company Exact Sciences received approval from the U.S. Food and Drug Administration (FDA) for the use of its Cologuard colorectal cancer screening test in average-risk individuals ages 45 to 49. Shares initially rose 8.7% on the news but ultimately closed down 0.2%.

Exact Science's DNA-based screening test was already approved for patients 50 years and older and is proving to be a commercial success. Test volume increased 93% last quarter, an acceleration from 79% growth the quarter before, and revenue soared 93% to $200 million. The company estimates that the label expansion to the younger age group in the U.S. grows the addressable market by 20% to $18 billion.

Investors, though, are focused on Exact's planned merger with Genomic Health, a supplier of DNA tests for people already diagnosed with cancer that help guide the course of treatment. Analysts are less than impressed with company estimates of only $25 million in cost savings from the $2.8 billion deal and the lack of overlap between the companies' sales organizations.

A report earlier this month that concluded that Cologuard was less effective and more costly than other screening strategies is also hurting the stock.

Shares of GW Pharmaceuticals initially rose 3.6% after the the British biotech announced European approval for Epidiolex, the company's cannabidiol (CBD) drug for childhood-onset epilepsy, but slipped later in the day to close down 1.9%.

GW said in its most recent conference call that it estimates the European market for Epidyolex, as it will be named there, is about a quarter to a third of the market in the U.S. The company is preparing to launch the drug in France, Germany, and the U.K. later this year, possibly followed by Italy and Spain at a later time, depending on pricing and reimbursement.

The drug was the first plant-derived cannabinoid approved by the FDA when it received the thumbs-up in June 2018. The rollout of Epidiolex in the U.S. has been a strong success to date, with sales of $68.4 million in the last quarter more than doubling from the quarter before.