Biotech has left a lot of investors broken-hearted over the years. Even more than traditional pharmaceutical companies, biotech companies entrance investors with visions of cures, hoping to sustain their engagement over the months and years it takes to develop and test therapies.

The fate of a biotech stock is tied to the ups and downs of those tests. For example, the stock price for Biogen, one of the oldest and biggest biotech companies, plummeted nearly 30% in March when it announced it was abandoning a treatment for Alzheimer's after weak results in clinical trials.

The latest buzz in biotech is around messenger ribonucleic acid, or mRNA, the molecule that delivers messages from our DNA to produce proteins needed. Scientists want to use this messenger to manufacture the missing proteins that cause conditions like cancer, cystic fibrosis, and a host of others. But will mRNA lead to more broken-hearted investors? 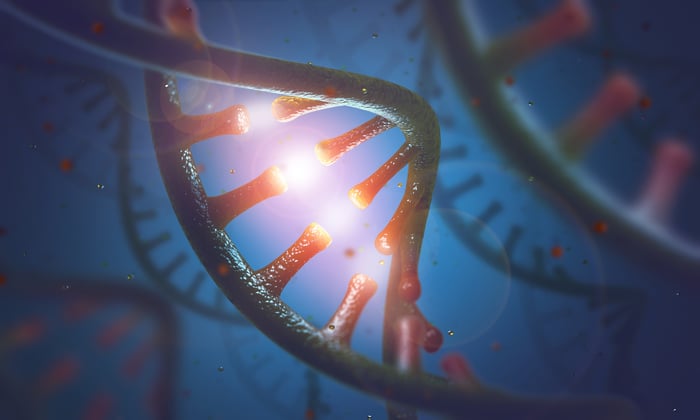 The advantage of mRNA is that it's not a one-time, irreversible procedure like gene technology that alters your DNA. Using the messenger molecule makes it possible to repeat and experiment. If at first you don't succeed, you can try again, and tweak it if necessary.

The challenge is to slip the messenger past the body's immune system. Researchers use lipid nanoparticles to wrap fat around the mRNA and fool the immune system into letting it through. The critical test that lies ahead is whether repeated messengers can get through.

However, mRNA is promising enough that some of the big pharma giants are investing in start-up biotech firms to get a piece of any eventual action. Merck, Sanofi, AstraZeneca, and GlaxoSmithKline have all put some money into it.

One top biotech focusing primarily on mRNA development is Moderna (NASDAQ:MRNA), which is working on a range of therapies for cardiovascular problems and cancer as well as rare diseases and has an additional focus on vaccines. A much smaller company, Translate Bio (NASDAQ:TBIO), has a narrower focus on cystic fibrosis treatment after abandoning liver research earlier this month.

Privately held companies like BioNTech and CureVac are also working on mRNA with investments from their own big pharma fan clubs. Investors thinking about buying Moderna or Translate Bio stocks should be aware of this potential competition.

The challenge for Moderna and Translate is different than successful efforts by Alnylam Pharmaceuticals and Ionis Pharmaceuticals to interfere with, or neutralize mRNA -- a technique known as RNA interference (RNAi). Their objective is to inhibit gene expression, not to change it, as is the case with these new mRNA experiments. Moderna and Translate Bio have a more ambitious, and riskier, goal than just blocking a messenger.

Moderna is working on a number of therapies, so the stock might seem like a better bet for investors than Translate. But both biotechs' therapies depend on the basic mRNA technique working, which is far from proven.

How much pain can you bear?

So here's the question: If big drugmakers like Merck and Sanofi are taking a flier on mRNA, why shouldn't you? For one thing, they have a lot more money than you do. They are betting only a tiny amount of their overall capital and are prepared to lose on this calculated risk.

Ultimately, of course, whether or not to buy mRNA-focused biotechs like Moderna and Translate Bio depends on your risk tolerance. Anyone investing in biotechs has to be ready for huge dips in valuation or even a complete bust in some of the smaller companies like Moderna and Translate. Keep in mind these companies have virtually no revenue and are running big losses. Everything hinges on their technique working.

Moderna or Translate could perhaps have one or more blockbusters in their pipelines if their mRNA approaches really work. But unless you have a sliver of your portfolio with money you can afford to lose devoted to speculative ventures, you might be better off investing in a diversified pharma giant, even if winnings from a spectacular breakthrough will be diluted.

Sanofi, in particular, has been spreading the wealth, putting hundreds of millions into Translate and BioNTech, primarily for vaccines. BioNTech has also attracted investments from Eli Lilly, Roche unit Genentech and Pfizer.

Messenger RNA could just be another biotech siren song. You can risk a broken heart and invest in it. But ask yourself first, "How much pain can I bear?"