Target (NYSE:TGT) has long used big-name partnerships as a tool to lure customers to its stores -- both celebrities and famous designers who put their names on brands that people wouldn't normally expect to find at a discount chain.

These attention-getting deals give Target a catalog of signature merchandise that can't be purchased anywhere else -- and brands like Anna Sui, Rodarte, Zac Posen, Missoni, and Lilly Pulitzer elevate perceptions of the chain, underpinning its Tar-zhay chic.

Now, Starbucks (NASDAQ:SBUX) is trying something similar. It has partnered with stylist/fashion designer Rachel Zoe for a merchandise collection. The items, which feature Zoe's "signature palm leaf and leopard prints in subdued hues, creating a juxtaposition between femininity and fashion," according to a press release, include cups and "lifestyle accessories." 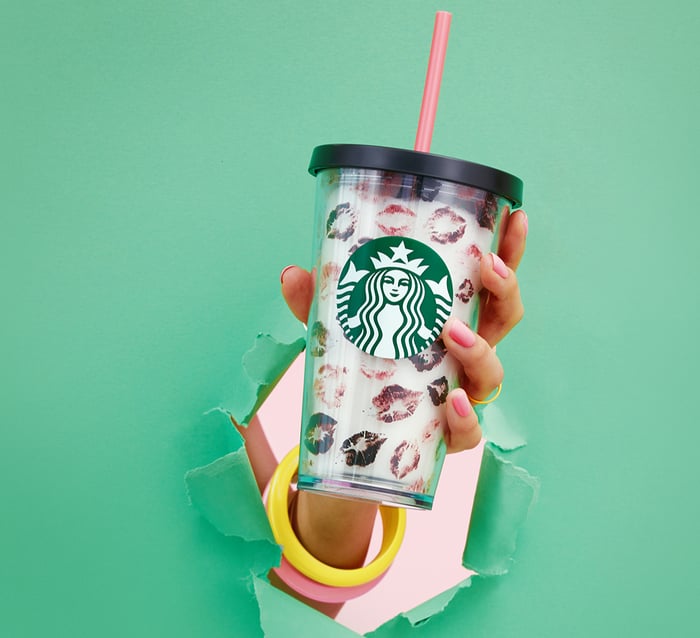 The Rachel Zoe collection will only be available in some stores in Asia. Image source: Starbucks.

It's a toe in the water

Starbucks' standard product line includes cups and mugs aimed at the chain's collectors and fans. For example, you can buy "Florida" or "Bahamas" mugs with unique artwork to commemorate your visit to either place -- but only at stores in those sunny locales. The same is true around the country, with the chain offering collectible cups tied to the city or state you're in. The company is also releasing new, seasonal designs, and expanding its drinkware offerings for the holidays.

This deal with Zoe, however, is an attempt to take the company's offerings beyond novelty mugs and into new territory. It's possible that fans of Starbucks or Zoe will feel they have to have something (or all six pieces) from this collection.

However, acquiring them won't be easy for Americans: The collection is being offered exclusively in select Starbucks locations across Asia. To get any of the items, you will have to visit a participating store in Cambodia, Hong Kong, Indonesia, Korea, Malaysia, New Zealand, Philippines, Singapore, Thailand, Taiwan, and Vietnam.

Trying out this kind of partnership in smaller markets will allow the company to gauge demand, and perhaps see if these unusual, limited-edition items incite the sort of frenzy some of Target's celebrity partnerships have generated.

Could this come to the U.S.?

Celebrity collaborations can elevate a brand or bring it down. If Starbucks makes a deal to have Tom Ford design a line of mugs that says one thing, while partnering with Mike "The Situation" Sorrentino would say another.

The coffee chain could bring this type of partnership to the U.S. as a way to increase traffic to its stores, and to associate the brand with people its customers admire or identify with. Making that type of connection was a key reason behind the Zoe collection, according to Starbucks Asia Pacific Vice President Erin Silvoy.

"We admire Rachel Zoe for her expressive patterns and modern design themes that empower women to live a life in style," Silvoy said in a press release. "With more female millennials entering the workforce in Asia Pacific than ever before, we knew that working with Rachel and her design team would result in a special collection of fashion-forward items that are functional for daily use."

Starbucks is making a statement here by tying its brand to a celebrity that it sees as speaking to portions of its core customer base. If it connects as intended, expect similar design collaborations to follow in the U.S. and around the world.