After the Great Recession, bank executives learned some valuable lessons, and new regulations have helped their banks strengthen their foundations. Not only have regulations required banks to hold a higher amount of equity capital on their balance sheets (making them more resilient to a downturn), but many management teams have also de-risked their underwriting, making their asset bases less susceptible to a market pullback.

Nevertheless, virtually all bank stocks have been feeling some pressure of late, as U.S.-China trade war tensions and the flattening of the yield curve have fed concerns over a possible recession. And if you'll remember, the last recession was really bad.

But if you're a long-term, value-oriented investor and you don't think the next downturn will be as bad as the Great Recession of 2008-09, it might be a great time to grab some quality bank stocks trading at some relatively low, low prices based on price-to-earnings or price-to-book ratios.

Before we talk about these stocks, it's important to remember not to get lured into buying a stock based on valuation alone. It's also important to look at a bank's quality, which can be reflected in its returns on equity (ROE), or how much profit a company is able to generate with each dollar of shareholders' equity it receives. Banks with good ROEs tend to have strong business models and risk controls. According to the St. Louis Fed, average bank ROEs hovered in the mid-high single-digits for the better part of the last decade. Since the Tax Cuts and Jobs Act of 2017 and the Fed beginning to raise interest rates, the average ROE for a large U.S. bank has risen to around 12.

Here are three such high-quality bank stocks that trade at very cheap valuations, yet still generate solid returns on equity. 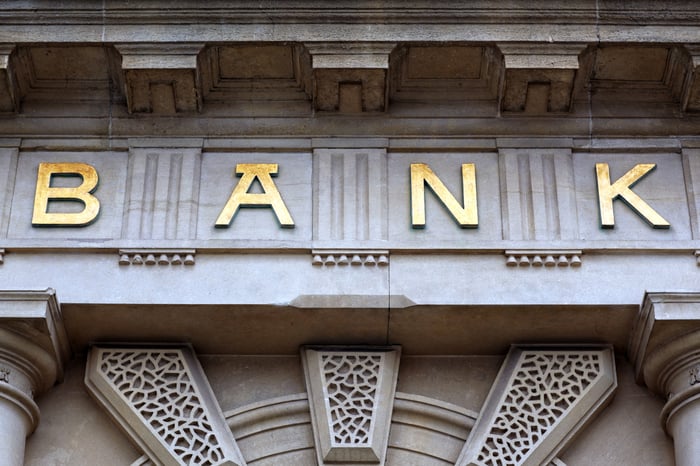 Fifth Third Bancorp (NASDAQ:FITB) is among the largest of the regional U.S. banks, with a market capitalization of just under $20 billion. The Cincinnati-based bank has a presence across the Midwest and Southeast, with branches in Ohio, Kentucky, Indiana, Michigan, Illinois, Florida, Tennessee, West Virginia, Georgia, and North Carolina. Fifth Third expanded its reach earlier this year when it made a $4.7 billion acquisition of Chicago-based MB Financial in a (mostly) all-stock deal, which closed in March.

In the second quarter, Fifth Third had a roughly 65%-35% split between commercial loans and consumer loans, with a diversified consumer portfolio and a heavy emphasis on commercial and industrial loans. These loans are usually backed by collateral in a business and are thus more secure than, say, construction loans that need a project to finish. Construction loans only made up 7% of Fifth Third's commercial book. Fifth Third also has a similar two-thirds/one-third split between its net interest income and noninterest income.

There are a few reasons to be bullish on Fifth Third this year. As a result of the acquisition, the company now expects an additional $255 million in cost synergies from integrating MB Financial, along with another $60 million to $75 million from revenue synergies through the cross-selling of products by 2022. Additionally, the company just cashed in its stake in financial technology processing firm Worldpay, generating a $233 million after-tax gain for Fifth Third.

All of these extra savings and capital inflows will generate money to go toward Fifth Third's $2 billion capital return capacity over the coming year, which will be composed of share repurchases and increased dividends. That total return is more than 10% of the current market capitalization. And this is all while keeping a relatively conservative 9.6% CET1 (Common Equity Tier 1) ratio on the balance sheet.

In addition, Fifth Third only expects to be marginally impacted by recent interest rate cuts. The company still expects net interest margins of 3.22% for the full year of 2019, which would still be an increase of 7 basis points over 2018. The bank also further expects its return on tangible equity (ex-goodwill and other assets) to rise to 16.5% versus 15.8% in the second quarter and its efficiency ratio (noninterest cost divided by revenue) to decline relative to the second quarter as well.

Georgia-based Synovus Financial (NYSE:SNV) is a $5 billion-market-capitalization bank that primarily serves the southeastern U.S. across Georgia, Alabama, South Carolina, Florida, and Tennessee. Like Fifth Third, Synovus is also in the midst of integrating a recent acquisition -- Florida Community Bank (FCB), which had been the largest community bank in Florida -- for $2.9 billion in stock.

Synovus' loan allocation is somewhat similar to Fifth Third's, with 44% of loans in commercial C&I loans, 28.6% in commercial real estate loans, and 26.5% in consumer loans. Synovus also garners noninterest revenues in brokerage and fiduciary services for consumers and businesses.

Synovus just spent the second quarter migrating FCB's systems over to the Synovus systems and branding, yet still managed to put up a strong quarter, beating analyst earnings expectations. While the company's net interest margin compressed due to the widely known changes in interest rates, the company still beat expectations on strong loan growth, lower charge-offs, and great expense control. Notably, the company's efficiency ratio, or noninterest expenses divided by revenue, declined more than 4 percentage points, from 56.4% to 52.1%, and charge-offs fell to a paltry 0.13% of principal.

While the company's return on equity actually declined slightly, its return on tangible equity -- which doesn't include certain acquisition-related assets such as goodwill -- increased to a healthy 16.7%, despite the interest rate pressure. This all fueled earnings growth of 8.4% last quarter.

This year, Synovus still expects revenue growth between 5.5% and 7.5% but expense growth of only 2% to 4%. That should lead to solid profit growth, generating enough cash for large share repurchases. In fact, Synovus has already reduced its share count by 8% since January and just re-upped its share buyback authorization to $725 million for 2019. Synovus has already spent about $345 million, giving the company an additional $380 million to spend -- good for yet another 7% of shares outstanding at today's valuation.

Finally, another extremely cheap bank stock is Wells Fargo & Co. (NYSE:WFC). It's fairly widely known why Wells Fargo trades at the valuation it does. The company has been under attack for three years, ever since a September 2016 scandal involving employees opening millions of fake accounts in order to meet sales quotas. Since that time, even more customer abuses have come to light, specifically in the company's auto loan segment, as well as the addition of even more fake customer accounts than initially reported. This all eventually led to the ousting of CEO Tim Sloan in March 2019, and the company is still without a permanent CEO at the helm. And just for good measure, the Federal Reserve imposed an asset cap on the bank in February 2018, which it has not yet removed.

This will likely cause Wells Fargo's earnings to stagnate for the next year; however, the silver lining is that the company can focus on high-grading its loan book, all while buying back a large amount of stock at depressed prices. In its recent quarter, charge-offs were near historic lows, helping Wells achieve strong profitability. The Federal Reserve also approved Wells to raise its dividend and to return $23.1 billion to shareholders in share repurchases over the next 12 months, good for more than 10% of shares outstanding at today's market cap. And this is all while the company maintains a very high 12% CET1 ratio, a huge cushion on the balance sheet.

Wells has the potential to set up well for the future should it eventually remedy its internal controls to the Fed's satisfaction and get the asset cap lifted. If that happens, Wells could eventually return to being a growth company and garner a higher multiple. In the meantime, the company is throwing off tons of cash, and shareholders are paid a hefty 4.2% dividend yield while they wait.