If you look around at the current state of physical money, it's easy to see the changes that are happening. More and more consumers are using their smartphones to pay for their merchandise in stores, and friends are splitting dinner checks and rent payments through apps -- all with just a few simple taps on their smartphone screens.

The global fintech market -- which includes everything from money transfers, mobile payments, and other online money services -- is projected to grow at an annual compounded rate of 22.2% and be worth $306 billion by 2023. If you're looking to benefit from fintech's increasing popularity, then you may want to consider what PayPal Holdings (NASDAQ:PYPL), Square (NYSE:SQ), and Alibaba Group (NYSE:BABA) are doing. 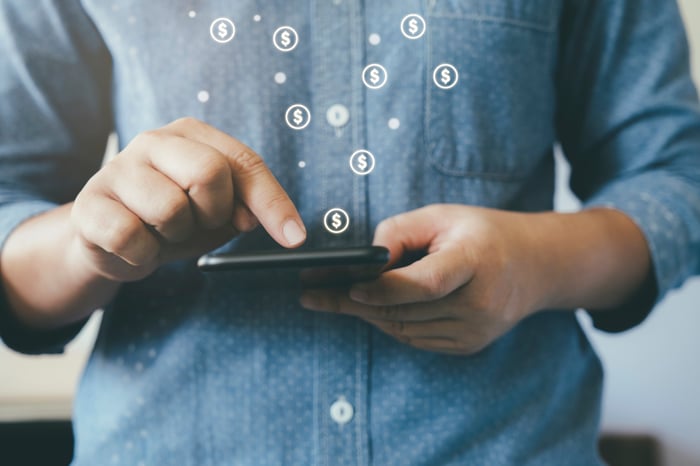 PayPal is one of the most well-known online payment companies, but if it's been a while since you've taken a closer look at the company, now is the time to do it. In the company's most recent quarter, PayPal reported sales growth of 12%, and the company's earnings spiked 58%. The results didn't exactly impress some of PayPal's investors (the company fell short of analysts' revenue consensus estimates), but despite investors' fickle responses, PayPal is continuing to grow its digital payment-processing platform.

Take, for example, PayPal's total payment volume (TPV), which is the total amount spent through the company's platform. TPV increased 24% year over year in the quarter, showing that the company is still a very popular platform for consumers and merchants to use for payment processing.

Additionally, PayPal has consistently grown its popular peer-to-peer payment app Venmo, and in the most recent quarter, the app processed $24 billion in TPV, an increase of 70% from the year-ago quarter. The company has also started increasing Venmo revenue, with 15 million Venmo users already having engaged in a monetizable transaction through the app.

Square may a lesser-known company than PayPal, but its role in the fintech market has become increasingly important. Square has a popular mobile payment app as well, called Square Cash, and also has point-of-sale terminals and online payment-transaction services. At the end of the company's second quarter, Square's gross payment volume increased 25% year over year, reaching $26.8 billion.

Square's adjusted revenue grew 46% year over year in the quarter, but investors were disappointed with management's third-quarter guidance and pushed Square's share price down following the earnings report. That sell-off is likely shortsighted. The company is still growing its payment volume quickly and pursuing new opportunities like its potential consumer lending service.

Square may seem like a bigger gamble for some investors because the company is much smaller and younger than some of its peers. But with the company's current sales and gross payment volume growth, as well as its opportunities through the Square Cash app and a potential consumer lending service, the company has lots of potential in the emerging fintech space.

The U.S. doesn't have a monopoly on the fintech market, and investors looking beyond our borders for a strong play in this space may want to consider Alibaba. The company is the largest e-commerce player in China, and its mobile payment app Alipay has a staggering 1 billion annual active users.

China has a massive mobile payments market that's grown from 1 billion transactions in 2013 to 60 billion last year. Alipay and its competitor Tencent's WeChat Pay collectively account for 90% of the mobile payment market.

Alibaba's business is made up of more than just its payment platform, of course, and the company's core e-commerce business helped Alibaba grow total revenue by 42% in the most recent quarter, with adjusted net income jumping 54%. With Alipay already firmly established in China and benefiting from its massive user base, Alibaba's a strong contender in the global fintech space.

Investors should remember that the companies listed above are betting on new mobile and payment services, which are still in their early stages of development. There may be some volatility in this market as companies establish themselves as key players and challenge established financial players.