It was supposed to be the space merger to end all space mergers and create a giant of satellite communications.

In February of 2017, Intelsat (OTC:INTE.Q) announced a complex, tripartite pact to merger its business with SoftBank (OTC:SFTBF) subsidiary OneWeb, attracting a $1.7 billion in investment from SoftBank in the process and wiping away $3.6 billion worth of Intelsat's debt. If effected, the transaction would have married Intelsat's fleet of 52 large satellites in high-altitude geosynchronous orbit with OneWeb's complementary and much larger constellation of 900 (planned) smaller satellites in Low Earth Orbit. It would also have resulted in a stronger Intelsat, with a lighter balance sheet and a larger fleet of communications satellites in orbit -- which would be 39.9% controlled by SoftBank.

But it was not to be. Just three months after the merger deal was announced, it fell apart after lenders balked at writing off such a large chunk of Intelsat's debt.

This month, more than two years after the debacle, the Intelsat-OneWeb-SoftBank saga has taken its latest turn. Intelsat sued its erstwhile partners, alleging breach of contract, fraud, and conspiracy to steal information. 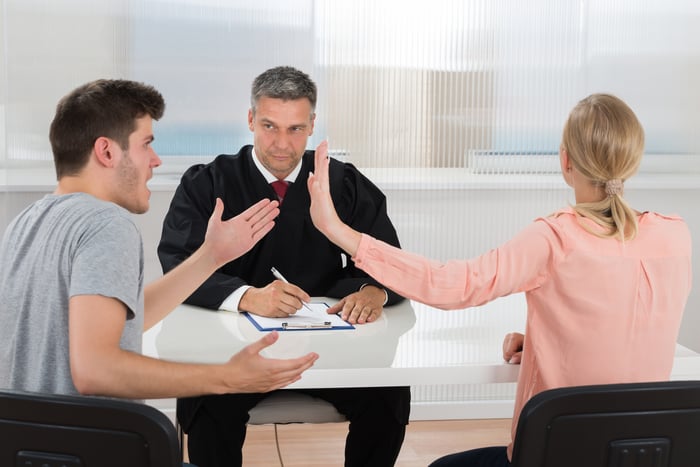 "The first thing we do, let's [call] all the lawyers"

According to SpaceNews.com, Intelsat filed a nine-count complaint against OneWeb and SoftBank on September 10.  The complaint alleges that in 2015 OneWeb contracted Intelsat to become its "sole and exclusive worldwide and regional distributor" of OneWeb communications services (once it had satellites capable of providing services, that is to say). Just a year later, however, OneWeb sold 40% of its shares to SoftBank and told SoftBank that it, in fact, would be OneWeb's exclusive global distributor.

Naturally, Intelsat complained, and the parties negotiated a workaround whereby Intelsat would distribute OneWeb's services via SoftBank. With that matter settled, and the three companies on the verge of forming one big, happy family anyway, all seemed hunky-dory, and Intelsat proceeded with providing all sorts of technical assistance and divulging all sorts of commercial secrets to OneWeb.

Even after the merger fell apart, though, the companies continued discussions on how they might cooperate. In its complaint, Intelsat says these discussions continued through March 2018, but then ceased in April 2018 when Intelsat learned that SoftBank was looking to sell its stake in OneWeb to a third party.

By February relations had taken a decidedly chilly turn, with OneWeb ordering Intelsat to "cease and desist" from representing to anyone that it still had exclusive distribution rights to OneWeb's services -- because OneWeb was attempting to resell these rights to others!

Intelsat engaged in negotiations in good faith over a period of several months, [but] OneWeb had already internally planned in secret to renege on the [companies' agreement] and begin competing with Intelsat ... Unbeknownst to Intelsat, at the time that SoftBank and OneWeb were negotiating and eliciting confidential and proprietary information from Intelsat ... OneWeb was planning to treat [their contract] as terminated and of no continuing effect and compete directly with Intelsat."

Which brings us to today. Intelsat thinks it possesses distribution rights to OneWeb's services. OneWeb disagrees. So Intelsat is suing.

In its complaint, Intelsat demands that OneWeb and SoftBank pay it "compensatory" and "punitive" damages, and be furthermore subjected to "injunctive relief" -- presumably with the aim that OneWeb be forced to affirm Intelsat's exclusive right to resell OneWeb's communication services.

In that vein, OneWeb launched its first batch of six satellites (out of 900 planned) back in February, and expects to have enough satellites in orbit to begin offering at least some services sometime next year, with full operational capability arriving in 2021.

As for the "damages" Intelsat demands, as of now the company alleges that "Intelsat has suffered significant damages and monetary harm," but "in an amount not yet fully determined." As such, it's hard to say precisely how far a successful lawsuit might go toward paring down some of Intelsat's massive $14.8 billion debt load. Nor can we say for certain how much damage a successful lawsuit might do to OneWeb's prospects of getting the rest of its satellites manufactured and launched into orbit, or what it might mean for SoftBank -- no stranger to debt itself, with a $110 billion-plus burden, and now at risk of losing money on its multi-billion dollar investment in WeWork.

If I had to guess, though, I'd say that, from the facts alleged, it sounds like Intelsat thinks most of the fault here lies with OneWeb, rather than SoftBank. Meanwhile, SoftBank's (alleged) desire to sell its stake in OneWeb suggests that the Japanese conglomerate may be losing faith in its subsidiary's ability to make a real run at this business.

If that's the case, the biggest winner out of all this mess may be the two companies moving to compete with OneWeb in Low Earth Orbit: SpaceX and Amazon.com.