After a red-hot start to the year, marijuana stocks were taken to the woodshed in the third quarter of 2019. Top names like Aurora Cannabis (NASDAQ:ACB), Canopy Growth (NASDAQ:CGC), and Tilray (NASDAQ:TLRY) all lost a significant amount of their value over the past three months, thanks to a slew of headwinds such as health concerns over vaping, managerial instability, scandals, and an increasingly risk-averse market.

Are there any pot stocks worth buying in the fourth and final quarter of 2019? The penny marijuana stocks HEXO (NASDAQ:HEXO) and OrganiGram Holdings (NASDAQ:OGI) might, in fact, be worth adding to your portfolio right now. Here's why. 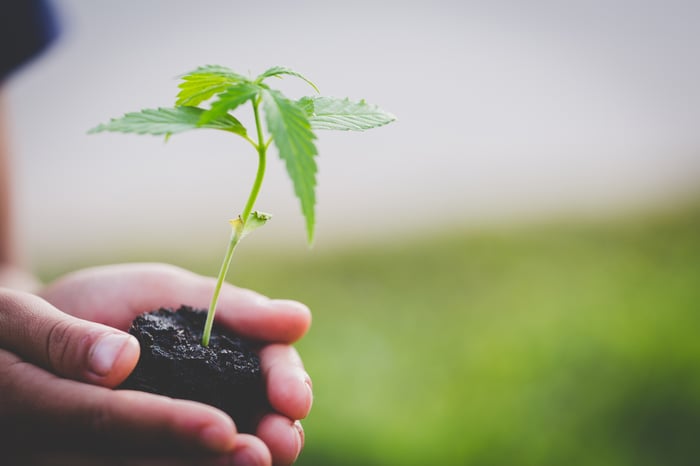 Operationally, HEXO has had a stellar 2019. By acquiring Newstrike Brands last March, the Canadian pot company significantly bolstered its production capacity and near-term outlook. In fact, HEXO's stock is currently trading at less than 3.4 times next year's projected sales, which is a lower-rung valuation for a high-growth cannabis entity. The company also secured a CA$65 million credit facility from two premier Canadian financial institutions earlier this year -- a move that greatly expanded its financial capacity for additional business development activities.

The real reason to consider buying this penny marijuana stock in the fourth quarter, though, is the company's joint venture with alcohol beverage giant Molson Coors Brewing. Through this joint venture known as Truss, this dynamic duo is poised to grab an outsize portion of the cannabis-infused beverage market in the years ahead. That's an important part of HEXO's overall value proposition, as the cannabis-infused beverage market is forecast to grow into a multibillion-dollar space within a few short years.

At a minimum, however, cannabis-infused beverage sales should transform HEXO into a consistently profitable company. Wall Street, in fact, expects the company to turn a profit as soon as 2020. That would be a major win for shareholders. Canopy Growth and Tilray, after all, are both on track to lose significant sums of money next year, and the average analyst estimate has Aurora simply breaking even in the next fiscal year.

With its three-tier indoor growing system, OrganiGram sports one of the industry's lowest costs of production for its award-winning portfolio of dried flowers. Even so, this small-cap pot stock never truly got caught up in the so-called "green rush" that pushed valuations across the space into the upper stratosphere. OrganiGram's stock, for instance, is currently trading at right around 5-times next year's projected sales. That's a fairly modest valuation in comparison to top dogs like Aurora, at 6.2 times fiscal year 2021 estimated sales; Canopy Growth, at 9.98; and Tilray, at 7.41.

OrganiGram's bargain-basement valuation isn't the core reason to buy its shares in the fourth quarter, however. Rather, the company is on the cusp of launching a line of cutting-edge cannabis-infused chocolates through its partnership with Canada's Smartest Kitchen, as well as a unique nano-emulsification product designed as a rapidly acting additive for beverages. Both of these product lines are expected to debut in early 2020, according to OrganiGram.

What's the investing takeaway? OrganiGram's next-generation cannabis products could turn into huge moneymakers for the company. After all, there is enormous demand for non-combustible forms of cannabis. As an important aside, OrganiGram is also actively searching for a partner for its nano-emulsification tech. So there's a shot that OrganiGram will be the next pot company to sign a major partnering deal.

In all, OrganiGram has one of the most efficient cannabis growing systems in the industry, a compelling valuation, and a well-differentiated portfolio of derivative cannabis products set to hit the market within the next few months. This small-cap pot stock, therefore, should start to heat up in the coming weeks.