The company's impressive performance shed light on both challenges and tailwinds in the broader retail industry.

Nike (NKE 0.56%) just did it again. Shares of the sportswear superstar climbed to an all-time high this week after the company breezed past analyst expectations in its fiscal first-quarter report. Revenue was up 7% in the quarter, or 10% on a constant currency basis, while bottom-line results surged with earnings jumping 28% year over year to $0.86 per share. Gross margin increased 150 basis points to 45.7% due to higher-average selling prices as the Nike Direct channel, which includes e-commerce and Nike-owned stores, performed particularly well.

The Swoosh also lifted its margin guidance, calling for gross margin to rise 50 to 75 basis points for the fiscal year. Not surprisingly, Nike investors were celebrating, pushing the stock up 4.2% on Wednesday, the first session after the report came out, and it gained again on Thursday. However, as the world's most valuable apparel company, Nike's results carry implications for the retail industry at large. Let's look at a few takeaways for retail investors from the company's big quarter. 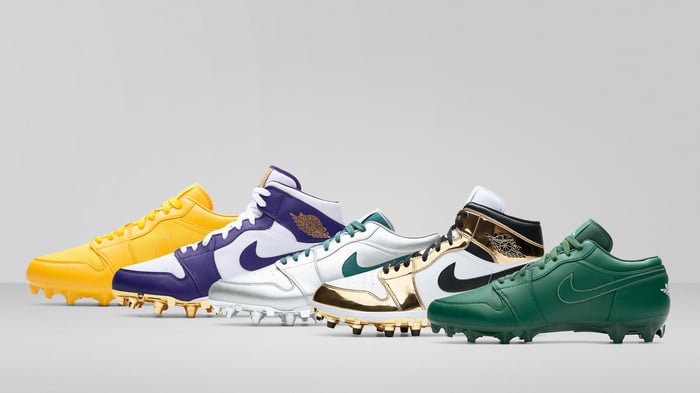 Tariff woes have rocked retail stocks back and forth as the sector moves several points -- as seen in the fluctuations of the SPDR S&P Retail ETF -- almost every time President Trump changes the narrative in the trade war. When the recent round of tariffs was announced, retail stocks sunk, but Nike, which has long counted on Chinese factories as a key supplier, downplayed the threat, and its results showed that the tariffs aren't enough to cancel out solid execution.

CEO Mark Parker didn't shy away from addressing the import taxes, saying on Nike's earnings call, "In relation to tariffs, we've been clear that we strongly believe in the power of free and fair trade." Meanwhile, CFO Andy Campion added, "Despite the recently implemented tariffs and associated FX headwinds, we expect to continue delivering strong financial performance going forward."

Nike did acknowledge some headwinds from the tariffs, noting that the impact would peak in its current quarter, but its strong guidance makes it clear that otherwise healthy companies can handle the headwinds from the trade war. What was similarly notable in the report was that Nike's Greater China sales surged 27% in constant currency, making it by far the company's fastest-growing region as well as its most profitable. Those numbers should help quell concerns about China's slowing economy or the impact of the trade war on the Chinese consumer. That echoes a similar argument from Alibaba, whose management said back in May that concerns about the trade war were overblown.

Back-to-school season is the biggest time of year in the retail industry after the holiday season, and with store closures looming and retail stocks slumping, stores count on a big bump in August from returning students and their families. According to Nike's latest results, the back-to-school season was superb.

CEO Parker said the company had its biggest back-to-school season ever, as kids' footwear and apparel saw double-digit growth, and he added that the season was extending into September this year, which falls in the company's second quarter. As a result, management said it was experiencing "tremendous momentum" in North America.

The strong back-to-school performance would seem to track with a robust economy, as unemployment remains low and the stock market has been near all-time highs. The National Retail Foundation also forecast that per-capita spending for back-to-school among American families would hit a record this year at $696.70, up 2% from the previous year.

Nike's strong performance at this time of year could bode well for children's and teen-focused apparel retailers like Children's Place and American Eagle, as well as Nike rival Under Armour, which does a brisk business selling to young consumers.

3. Brands are breaking away from stores

Since Nike launched its Consumer Direct Offense, a new strategy to rejuvenate its business, the company has doubled down on the digital channel, and that move has been one of the biggest drivers of its recent success. In the first quarter, momentum in digital continued as sales through online channels jumped 42% overall and more than 30% in North America.

Like many popular consumer brands, Nike is realizing that in today's retail environment, it can't rely on other stores, especially when so many chains, especially those in malls, are seeing declining traffic. Through interfaces like the Nike app and the SNKRS app, the company is building out its own sales channels and creating brand buzz without the need for a retail partner.

While that's great news for Nike, it's a problem for traditional retailers like Foot Locker and Dick's Sporting Goods, which have long relied on the Swoosh to help them drive customers to their stores.

This challenge exists for retailers outside the Nike bubble as well, as in the e-commerce era they need to offer consumers more than just merchandise in order to bring them in. Nike seems to get this as ideas like its experimental concept store in New York's Soho neighborhood combines shopping with something of a Nike museum and interactive opportunities, like the chance to try out new shoes on a basketball court.

The rest of retail may get a boost from a strong back-to-school season, but it's up to them to follow Nike's lead and rethink their business models in order to thrive in a fast-changing environment.